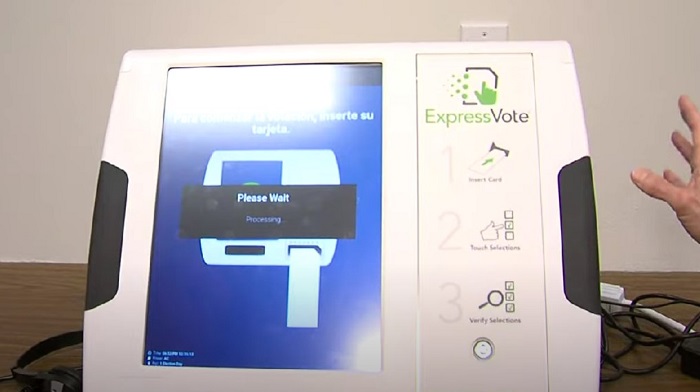 The midterms, according to Politico, face a “beard of threats” ranging from “stolen Twitter accounts to hacked election websites”.

Perhaps the most notable paragraph in the entire column states that while the 2020 election faced issues of electoral integrity that have been “thoroughly debunked”, these new perceived threats are now real.

“The 2020 presidential election was riddled with allegations of voting machine hacks that were later debunked,” Politico claims. “Still, there are real risks that hackers could tunnel into voting equipment and other election infrastructure to try to undermine Tuesday’s vote.”

The 2020 presidential election was riddled with allegations of voting machine hacks that were later debunked.

Still, there are real risks that hackers could tunnel into voting equipment and other election infrastructure to try to undermine Tuesday’s vote.https://t.co/kDij1J08eU

The Politico report goes on to explain that the potential for election hacking comes from seven states and Washington, DC, which are using wireless modems “to send unofficial election night results to their central offices.”

“These modems use telecommunications networks that are vulnerable to hackers, and malicious actors could exploit them to tamper with unofficial voting data, corrupt voting machines, or compromise the computers used to count official results,” they reveal.

Interestingly enough, readers find this in the third paragraph:

The US has many safeguards protecting voting equipment, so any actual hack would likely be localized, detected quickly and unlikely to affect the final results. But as 2020 showed, even an attempt to change votes – or the mere accusation of manipulation – can undermine confidence in the outcome.

They are when they know their side will lose.

Elections are only safe if they win.

The warning is strange, as officials and the media have said that electronic voting machines were 100% safe and reliable and that the 2020 election was “the safest in US history.”

ALSO READ  Did Trump Hurt Republicans in the 2022 Election? The numbers indicate yes.

In contrast, Matt Blaze, a professor of computer science and law at Georgetown University who studies voting systems, told Politico, “We now have to worry about whether someone will access a communications network that is fundamentally open.”

The elections we won were safe, but there are real concerns that the elections we are about to lose will not be safe. Get ready for this first thing on Wednesday. pic.twitter.com/nzCOzG6k9D

RELATED: Cruz mocks Beto: He’s getting ready to get his ‘ass kicked’ for the third time

However, the Politico column reflects what Democrats said before the 2020 election.

A series of letters from Senate Democrats written in 2019 questions the security of some voting machine vendors.

“Election security experts have noticed for years that our country’s electoral systems and infrastructure are under serious threat, but voting machines reportedly continue to fail and fail across the country as vendors fail to innovate, improve and protect voting systems, leaving the U.S. elections are at stake. avoidable and increased risk,” reads a statement from Senator Elizabeth Warren (D-MA).

“Warren, Klobuchar, Wyden and Pocan examine vulnerabilities and shortcomings of the election technology industry with ties to private equity”

It’s unclear what has changed between now and then to go from completely secure to potentially for security threats.

We may never find out what those changes are.

Kevin McCarthy could get a floor fight for the speaker. That hasn’t happened in a century.