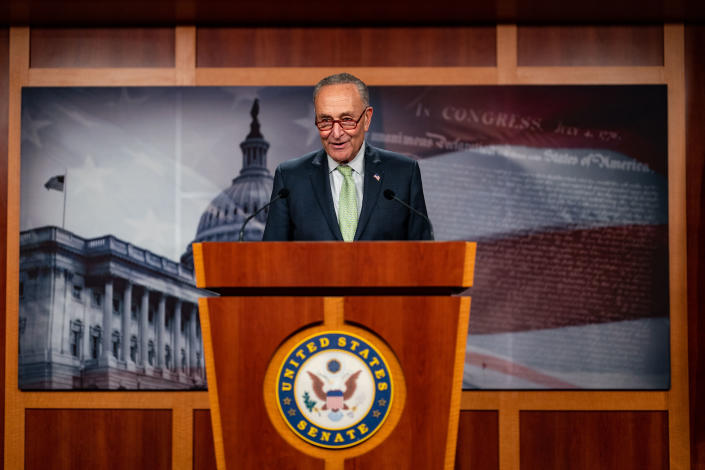 For example, when told that “Democrats in the U.S. Senate just presented a surprising $369 billion climate and energy package that promises to cut greenhouse gas emissions to 40 percent below 2005 levels by 2030,” nearly half of them said. Americans (47%) are in favor of it, while less than a third say they are against it (30%).

That gap then widens—to 61% in favor and 14% against—when respondents are told that “the Democrats’ new Senate package would also cut the cost of prescription drugs by allowing Medicare to negotiate the prices of drugs for the first time.” pharmaceuticals, while the of-pocket costs at $2,000 a year.”

And when describing the financing mechanism of the deal, “The Democrats’ new Senate package would also bring in an estimated $451 billion in new revenue over the next decade, primarily by requiring large corporations to pay the taxes they owe, while spending $ Set aside 300 billion for deficit reduction” — a majority of Americans (53%) say they still support it. Only 19% are against.

At a time of bitter polarization, these are remarkably positive results for any bill explicitly associated with one party and not the other. Independents support every element of the Manchin-Schumer deal by the same wide margins as Americans in general — and even a large number of Republicans are in favor (47%) rather than against (27%) of the reforms in the area of ​​human rights. prescription drugs.

At this point, no one knows for sure if the Manchin-Schumer deal will survive a 50-50 Senate, where Republican opposition is unanimous and Democrats can’t afford to lose even one vote. The party is currently trying to persuade its other mercurial centrist, Arizona Senator Kyrsten Sinema, to sign tax changes she previously opposed.

But what the Yahoo News/YouGov poll makes clear is that Democrats would almost certainly be better off politically if they managed to pass the bill than if they let it die on the Senate floor.

Otherwise, the president’s party will face significant headwinds as the midterm elections approach. For starters, perceptions of the economy — which have been bleak since inflation started rising last year — are only getting worse.

While economists and columnists debate whether two quarters of declining GDP growth means the US is technically in recession, Americans seem to have largely made up their minds: a majority (53%) say we’re already in one, with more to come. once 16% say we are going that way. Even most Democrats (55% overall) believe the US is in recession now (36%) or soon (19%).

ALSO READ  Trump's 'choices' to do nothing are crucial to prosecution

Unsurprisingly, Republicans are more negative about the economy than Democrats, and the proportion that describe the economy as “bad” (76%) is up 17 points since April. Among the self-employed, that number increased by 18 points (to 66%) over the same period; among Democrats, it is up only 6 points (to 28%).

Nevertheless, a full 70% of Democrats now say the economy is fair or bad, up 14 points since April.

Inflation continues to dominate the conversation: 63% of Americans say it’s the economic problem they’ve “heard most about in the media,” compared to just 13% for recession and 8% for the low unemployment rate. And 32% choose inflation as the issue most important to them “when they think about this year’s elections”. Only one other option from a list of 10 – “democracy”, at 15% – cracks double digits.

This is a problem for the Democrats. Why? Because as many as 40% of Americans say Republicans would do a better job of tackling inflation; only 28% say the Democrats would. When asked which party can better solve inflation, Americans also prefer Republicans (36%) over Democrats (25%) — an 11-point gap that has doubled since April.

Meanwhile, nearly two-thirds of Americans (63%) say Biden deserves at least some blame for rising prices, and a higher proportion (35%) say he deserves “most of the blame” than saying the same thing about someone or something else — including “disruptions caused by the global COVID-19 pandemic” (29%). A clear majority of Americans (59%) — including a full third (32%) of Democrats — also say Biden is “not doing enough to tackle inflation,” up 5 points since April.

Overall, only 26% of Americans think Biden “can handle the challenges of the US,” including just 17% of independents and (given partisan loyalty) a rather anemic 54% of Democrats. In the past three weeks, Biden’s job approval rating has fallen by 3 points, from 38% to 35% – a new low. Even fewer Americans disapprove of the work he does on the economy (30%) and inflation (26%).

The Yahoo News/YouGov survey was conducted immediately after Schumer and Manchin announced their deal, amid falling gas prices and the passage of bipartisan legislation designed to make America more competitive with China. It concluded before the White House announced earlier this week that a US drone strike had killed al-Qaida leader Ayman al-Zawahri. It’s impossible to say how much of this positive news for the president’s party – if any – will be reflected in the latest research findings, or whether it will influence future reactions.

However, there were two small bright spots for Democrats in the wake of Manchin-Schumer’s announcement. First, the proportion of Americans who say the country is moving in the right direction has risen 3 points since early July (to a still paltry 18%). And when asked who they would vote for in their own district if the “U.S. Congressional election were held today,” 45% of Americans now say the Democratic nominee versus just 39% for the Republican nominee — a 6 percent advantage. points. In early July, Democrats led by 4 points – 43% to 39% – on the same question.

The Yahoo News survey was conducted by YouGov using a nationally representative sample of 1,557 American adults who were interviewed online from July 28 to August 1, 2022. This sample was weighted by gender, age, race, and education based on the American Community Survey, conducted by the U.S. Bureau of the Census, as well as the presidential vote (or non-vote) and voter registration status in 2020. Respondents were selected from YouGov’s opt-in panel to be representative of all U.S. adults. The margin of error is about 2.7%.