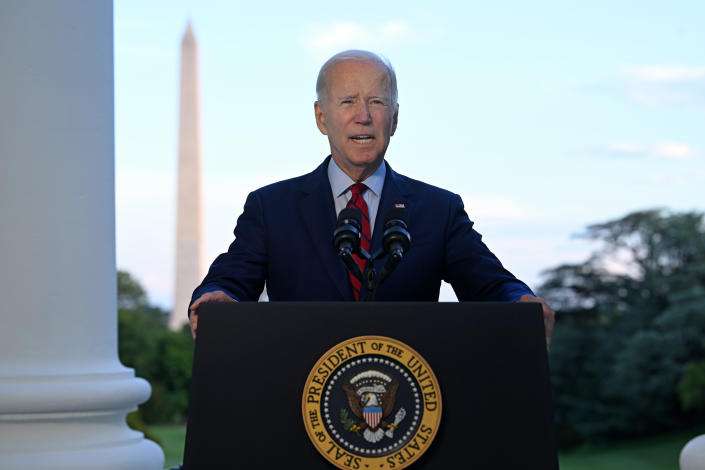 In a striking expression of the deep pessimism and polarization currently plaguing American politics — as well as a growing distaste for the presidential frontrunners of both parties — a multitude of registered voters now say it would be “the worst that could happen” if a from both parties According to a new poll by Yahoo News/YouGov, President Biden (39%) or former President Donald Trump (41%) would win the White House again in 2024.

Only about half of voters say a second term from Trump “would be the best thing that could happen” (22%). Only 8% say the same about a second Biden term.

Respondents were also given a chance to say that the president’s re-election would be “mostly bad,” “mostly good,” “a mix of good and bad,” or “I’m not sure.”

More chose “the worst that could happen” than any other option.

The survey of 1,557 American adults, conducted from July 28 to August 1, is just the latest in a series of bleak readings of the national mood — but it may be the most bleak yet.

That’s especially true when it comes to public perception of Biden.

In the past three weeks, the rating of the president’s job has dropped another three points, from 38% to 35%, a new low. Even fewer Americans disapprove of the work he does on the economy (30%) and inflation (26%). Overall, only 26% of Americans think Biden “can handle the challenges of the US,” including just 17% of independents and an anemic 54% of Democrats.

Most Americans also think that Biden is either “changing too much about America” ​​(30%) or “not changing it enough” (35%). Only 15% say Biden is changing the United States by “the right amount.”

At 79 years old, Biden is already the oldest president in American history; he would be 86 at the end of his second term.

Regardless, Biden continues to insist that he run for reelection — and while several Democratic leaders appear to be testing the waters of 2024, none have indicated that they will directly challenge the incumbent president in a primary. Yet a whopping 55% of Democrats and independents leaning Democratic say they’d rather see “someone else” as the party’s 2024 candidate. That’s twice the number who say they’d rather see Biden as the nominee (27%).

Who else would the Democrats prefer? Not Vice President Kamala Harris, who unsuccessfully sought the 2020 nomination. Assuming Biden is inactive by 2024, only 30% of Democrats and Democratic-oriented independents say they want Harris to be the nominee. Again, most (52%) say someone else – a number that goes up to 55% among those actually registered to vote.

At first, the slightly younger 76-year-old Trump may seem better positioned for a new presidential bid — but that’s only because Republicans are less willing than Democrats to discredit their own party’s flag bearer. For example, when asked what the outcome would be for America “if Joe Biden and Donald Trump face each other again in 2024 for the presidency,” nearly half of Biden voters (49%) say a rematch is “usually bad.” or “the worst that could happen”; only 10% think it would be mostly good or the best possible. In contrast, a multiple of Trump voters (44%) think that a Trump-Biden rematch would usually be good or the best possible, while only 21% think it would mostly be bad or the worst possible.

Similarly, in 2020, Trump voters are almost twice as likely as Biden voters (29%) to say their husbands should re-enter in 2024 (54%). The reason: They’re just a lot more confident in Trump’s strength as a candidate, with just 18% saying the former president would be weaker in 2024 than in 2020 — and a full 53% saying he’d be the party strongest candidate next time. Put another way, Trump voters (58%) are nearly three times as likely as Biden voters (22%) to say their party’s leading presidential candidate would be stronger in 2024 than they were four years earlier.

ALSO READ  'It Was a Bit of a Miracle': How Milwaukee Won the 2024 Republican National Convention

That said, the new poll does contain several warning signs for Trump. For starters, he continues to follow Biden 45% to 42% in a head-to-head showdown among registered voters — despite Biden’s blatant vulnerabilities. For another, fully half of the country (50%) is now saying — in the wake of the high-profile January 6 House selection committee hearings — that Trump should not even be allowed to serve as president, because of his efforts to win the election. of 2020. And while Trump voters don’t openly belittle their party’s leader the way Biden voters do, they are hardly unanimous in their support for him.

Example: While a slim majority (again 53%) of Trump voters still say he would be the GOP’s strongest candidate by 2024, it means almost as many of them say: that he would not are the strongest candidate (21%) or that they are not sure (26%). Likewise, when given a choice, most Republicans and Republican independents don’t really say they want Trump to be the 2024 nominee. Against “someone else,” for example, only 48% choose Trump, while most either choose the nameless alternative (39%) or say they’re not sure (13%). Against Florida Gov. Ron DeSantis (35%), even fewer elect Trump (44%); more say they are not sure (20%).

The latest Yahoo News/YouGov poll went immediately after the Democratic Sens. Chuck Schumer and Joe Manchin, TBEN into the field. Va., announced their big deal on climate, tax and prescription drugs; it concluded before the White House announced earlier this week that a US drone strike had killed al-Qaeda leader Ayman al-Zawahri. It’s impossible to say how much of this positive news for the president’s party – if any – will be reflected in the latest research findings, or whether it will influence future reactions.

But partisanship is now so entrenched — and views of the economy so pessimistic — that it’s hard to imagine a sudden, major swings in public opinion. For example, a majority of Americans (53%) say the country is already in a recession, and another 16% say we’re headed in that direction. As a result, 81% of Americans now describe the US economy as “fair” or “poor,” compared to just 70% in mid-April.

Last week, this sense of bipartisan discontent inspired a group of centrist politicians to launch a project called Forward, which they described as a “unifying political party for the majority of Americans seeking to overcome divisions and reject extremism.”

According to the new Yahoo News/YouGov poll, that message could appeal to some Americans, even though the U.S. electoral college and winning election tradition make it nearly impossible for third parties to gain any influence. Only 16% of Americans agree that they are “well represented by the Democratic and Republican parties”, while 40% opt for the alternative statement: “America needs a new political party that is at the political center among the Democrats.” and the Republicans.”

Similarly, 40% want “the option to vote for a third candidate for president in 2024 who sits at the political center between Democrats and Republicans” – including 55% of independents, 53% of moderate politicians, 40% of Biden voters and 40% of Trump voters. When asked to describe the priorities of elected officials, 37% of Americans say Democratic priorities are “too extreme”; 40% say the same about Republican priorities.

Those numbers seem to indicate that about 4 in 10 Americans are ready to vote for a third party by 2024. But that’s misleading. For the most part, Americans who say Democrats are too extreme are not the same Americans who say Republicans are too extreme; rather, it is adherents who think that the other side is the problem. In reality, true centrists – the ones who reject both Republicans and Democrats as too extreme – are few and far between. Only 8% of Americans fit the bill, according to the poll.

The Yahoo News survey was conducted by YouGov using a nationally representative sample of 1,557 American adults who were interviewed online from July 28 to August 1, 2022. This sample was weighted by gender, age, race, and education based on the American Community Survey, conducted by the U.S. Bureau of the Census, as well as the presidential vote (or non-vote) and voter registration status in 2020. Respondents were selected from YouGov’s opt-in panel to be representative of all U.S. adults. The margin of error is about 2.7%.