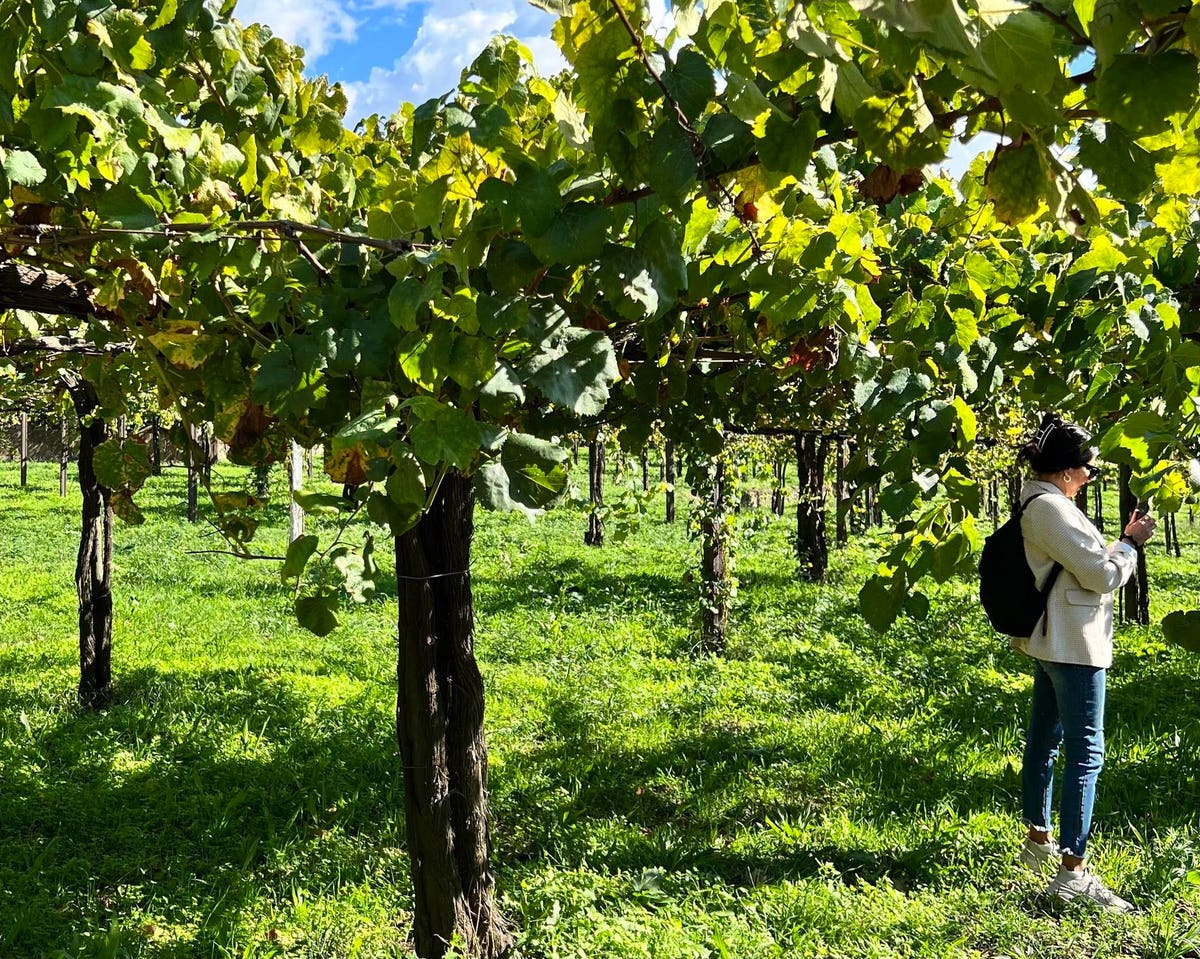 Worldwide wine lovers know the Douro Valley. Often they also know the Alentejo now. But there is much more to Portugal, starting with the region which is the largest in the country, one of the most beautiful and probably the most misunderstood.

People all over the world think they know vinho verde (literally “green wine”, in English, as in very young, and a specific style – cheap and cheerful, sweet and fresh and fizzy). But the first thing the Vinho Verde Winemaking Commission wants people to know is that there’s a lot more to it: they’ll tell you all about it at their visitor center in Porto. It’s not a style; it’s a region – the far northwest of the country – that is vibrantly green, thanks to its relatively mild climate and above-average rainfall.

Like pretty much all of Portugal, it’s a place with a long winemaking tradition, dating back some 2,000 years (and it’s a demarcated region with a DOC since 1908). Most homes today still have vines planted in their front or backyard for their personal wine production, or to grow grapes to sell to their neighbors or the local wine cooperative. According to one statistic, the region has 16,000 hectares (about almost 40,000 acres) and 16,000 grape producers. The vines are intertwined with everyday life.

In some of the nine sub-regions, those vines have a very distinctive visual profile. They are about six feet high, freeing up the land below for vegetables and other crops.

In recent years, creative winemakers have moved in, often after their successes in the more famous Douro Valley. Meanwhile, established players – sometimes led by a new generation who have just returned from agronomy school – are experimenting with new, more elegant wines that are more gastronomic and structured. They’ve ditched the added sugar and carbon dioxide (done to mimic the second fermentation that took place in the bottle prior to modern winemaking knowledge), making elegant white wines that often have aging potential.

In fact, many of the region’s wines are still very easy to drink. On a recent whirlwind tour of the region, more than one winemaker used the term “pool wine” during a tasting. One described a ‘breakfast wine’. And wine tourism is getting better and better. While there are a few wineries with tour buses, most are small family projects where the hospitality is genuine, the home-cooked food is delicious, and the tours and tastings are informative and interesting for beginners and wine professionals alike.

Lately, marketers have been working to promote wine tourism itineraries, which visit 28 wineries. Here are some of the standouts.

For now, this is the best place to stay in the vinho verde region: a place that opened in 2015 as a “wine experience hotel” with 30 rooms and has since grown to 46 rooms, some with their own plunge pools or personal wine cellars. The rooms are dimly lit and romantic, but the view is wide. A highlight is the large-scale artwork above the dining room, made up of 366 carved leaves (one in gold leaf) by artist Paulo Neves. The winery it is part of, Quinta da Lixa, produces a good variety of fine wines using the region’s main grapes. “Making good wine is now understanding what goes on in the ground,” but he clearly has fun with different vintages and different barrels for fermentation, and he ended up having a couples dinner with interesting Pet Nats instead of fortified wines. He also has a rule to leave all glasses on the table during those dinners – a (rather large) group of journalists recently finished with 166.

Soalheiro is one of the best-known wineries in the region, all the way to the Spanish border in the Monção and Meglaço sub-region (look for it on the labels). Soalheiro has 19 references (!) from a single grape – alvarinho – and a successful emphasis on wine tourism. Details are sketchy for now, but a nine-room hotel is in the works and a basic guest house for six is ​​already in place. For now, tourism includes a mini-museum – the original production center, 40 years ago, in the winemaker’s garage – with one of the chestnut barrels they used in the past (oak is hard to come by) and a bottle from the original vintage, in 1982. Upstairs is There’s a light-filled tasting room that doubles as a lunch table — “we want to be different from a restaurant,” says food and beverage manager Guilherme Augusto Alcantara Lobo — loaded with local specialties such as Bísaro pork, goat cheese, grilled sausages, tomato and onion and stewed lentils, all from local producers.

Although recently acquired by Esporão, one of Portugal’s largest wine producers, Quinta do Ameal does not seem to have lost its artisanal soul. The wines, made from the Loureiro grape, have good complexity and balance, and the entry-level Bico Amarelo – their ‘pool wine’, in the words of Mariana Brandão, wine tourism supervisor – won a spot on wine lover‘s Best Buy list. Since the beginning, in 1999, they emphasized quality over quantity – a radical idea at the time – and never added sugar or carbon dioxide. The accommodations are no less easy going and enjoyable. The three-bedroom Casa Grande and two-bedroom Casa da Vinha are simply but beautifully furnished with locally made items and a good access point for wine tasting, as well as hiking in the 200-year-old forest or biking or kayaking along the Lima River.

Diogo Teixeira Coelho, owner of the fifth generation winery, continues his ancestral legacy, while also taking risks and experimenting with new expressions of vinho verde wines. A tasting in the new glass-walled tasting room — the winery that invested in wine tourism when the world came to a standstill in 2020 — started with several Pet Nats, prompting Coelho to explain that “we took the Pet Nat train that goes around the world.” “But it is also a nod to traditional vinho verde wines, where a second fermentation took place in the bottle. “My grandfather said that if there are no bubbles, the wine is dead,” he recalls. At least the place is now full of life, especially during the cozy homemade lunch that can be shared with the family on the terrace, including rice cooked with one of the chickens on the family farm, or sausage made from one of the pigs.

The family-owned winery is relatively large for the region and regularly wins awards for its wines. Like Carlos Teixeira of Quinta da Lixa, winemaker António Moneiro says his philosophy is minimal: “the best wines come from the best grapes”, and he is also working to bring back nearly extinct “forgotten” grapes and experimenting with varieties found elsewhere in the world. the country. Even his entry-level wine is balanced with good structure, roundness and maturity. “Portugal needs to deliver more,” he explains, noting that the small country competes with France, Italy and Spain.

Owner Joana de Castro jokes that she started making sparkling wine on her family’s farm – her father, Professor Rogério de Castro is considered a grandfather of Portuguese winemaking – when she discovered she loved champagne but couldn’t handle it. afford to buy it all the time. Now its bubbly is on par with the best bubbly in Portugal, and its wine tourism offerings take the form of a soulful seven-room bed-and-breakfast in an old house, parts of which date back to the 17th century. Tastings are still held in the old stone walls fumeiro, the room traditionally used to cure meats – Castro prefers rustic over the newer facility next to the pool.

Quinta da Santa Teresa, the flagship of A&D Wines (the project of Alexandre Gomes and Dialina Azevedo), occupies a prime spot on the border with the Douro Valley, making it a good choice for anyone looking to compare terroir. The vineyards are organic and largely planted in the Douro Valley terraced style. One vine — which they call the grandmother — is about 200 years old and covers about 280 square feet. The event spaces also have an impressive history, including vintage Portuguese tiles, and the glass-walled tasting room overlooks an inviting pool.

The perfect winter holiday is on the island of Canouan

Drink these excellent zero-proof wines for the 2022 holiday season