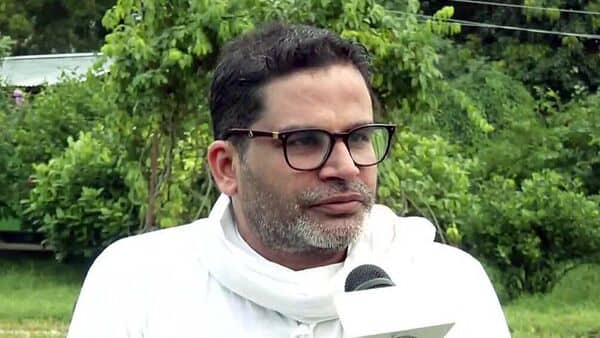 Poll Strategist and former leader of Janata Dal-United (JDU) Prashant Kishor targeted Bihar Chief Minister Nitish Kumar, who was sworn in as CM for the eighth time last month after severing ties with longtime allies BJP and said Fevicol ‘should make him their brand ambassador’ ‘ to be glued to ‘CM Chair’.

“We have seen many alliances made and broken in Bihar… only one link does not break – between CM chairman and Nitish Kumar, whether it is an alliance. It is exemplary; can only be done by him… Fevicol would make him their brand ambassador. We heard the line ‘Fevicol ka jod hai, nahi tutne wala hai’ (it’s Fevicol band, won’t break)” said Prashant Kishor, as quoted by news agency ANI

Speaking about Nitish Kumar’s outreach to various opposition leaders, he said there is a need for a “credible face” and mass movement to seek the voice of the people in the 2024 Lok Sabha elections, while commenting on meeting leaders of various political parties “wouldn’t matter much” “and that such gatherings cannot be seen as unity of opposition or political development.

“Such meetings and discussions that take place will not change the political situation on the ground. I have no such experience. He has more experience than me. But I do not see the meeting of some leaders individually or collectively, who hold discussions or press conferences, as a unit of opposition or a political development”,

“Unless you create a popular movement and generate a popular story, form a formidable entity and a credible face that can make the public believe that he can be a better alternative to the BJP, only then will they (people) vote for you.” Kishor is still up to it.

He glanced sharply at the JD(U) chief and said: “When he was with the BJP, he met the leaders who were with them. Now he is no longer with the BJP, so he meets the parties and leaders who in the opposition of the BJP. That wouldn’t matter much. You need a credible story, the trust of the people, workers on the ground and a trustworthy face and a people’s movement to do it.”

While on the issue of the face of opposition among leaders such as Mamata Banerjee, Arvind Kejriwal and KCR, Kishore said, “Right is the one who can unite everyone and is acceptable to everyone.”

Speaking of Nitish Kumar’s displeasure with him, Kishre said: “Nitish Ji isn’t mad at me, it’s his way of speaking…I have a related relationship with him. Who takes his conversations seriously? He was with BJP a month ago,”

Nitish Kumar met several opposition leaders during his visit to Delhi and while answering a question about Prashant Kishor he said: “He joined me and I told him to stop (the work he was doing). He did not listen to me and worked for many parties,” said Kumar. “Vo uska dhandha hai (this is his business),”

“Let him do what he wants to do in Bihar. His statements have no meaning. Does he know TBEN what has been done in the state since 2005?

“Yes, these people know how to get publicity, make statements. They are experts at this and keep saying it. If someone talks like that, try to understand it, there must be something in their mind. It could be to join BJP or help BJP in a secret way,” Kumar added.

Bihar’s prime minister has been trying to unite the opposition since he left the BJP and formed the Mahagathbandhan government in Bihar. His party has tried to position him as Prime Minister Narendra Modi’s next challenger and in a speech to a JD(U) state leader last month said the BJP could be blocked to 50 seats in the next Lok Sabha elections if all opposition parties unite.