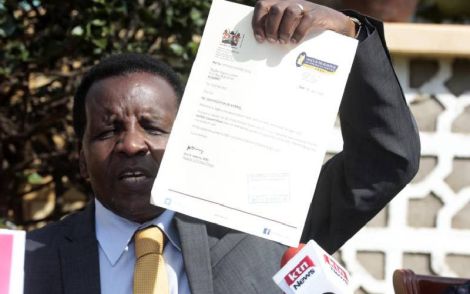 Former presidential candidate and gospel artist Reuben Kigame has summoned President William Ruto for what he described as exaggerated religion rather than lowering the cost of living.

In a statement on Thursday, Sept. 15, Kigame said that although he is a devout Christian who believes in prayer, issues such as cutting food prices will not be answered at a time when the country is in an economic crisis.

“I am a committed Christian who believes in prayer and believes that God has helped us thus far and will continue to trust Him for the future of Kenya, but I hope that issues such as lowering food prices will not be answered with the ruling of the Supreme Court. state house: “let’s pray about it,” Kigame . declared

Independent presidential aspiring Reuben Kigame in a past presser.

The veteran musician’s veiled attack came in the wake of prophets and other religious leaders who flocked to the State House.

On Wednesday, September 14, President and First Lady Rachel Ruto hosted a delegation of prophets from Africa and the popular Tanzania Zablon choir.

Kigame also wondered why the evangelical wing of the church was overrepresented at the presidential inauguration ceremony in Kasarani,

“During the inauguration, the evangelical wing of the church was overrepresented. This was unnecessary. I don’t know what the transition committee intended to prove to Kenya and the watching world.”

The gospel singer further advised the president to stop exaggerating religion and focus on complying with Article 27 of the Constitution.

“I know I will be beaten, but I have to be honest and accountable to the nation. I think the Ruto administration is exaggerating religion. While we recognize the hand of God that has brought us this far, the presidency must have Article 27 of the constitution,” Kigame stated.

Article 27 of the Constitution speaks of equality and freedom of expression stating that everyone is equal before the law and has the right to equal protection and benefits from the law.

Furthermore, the article includes the full and equal enjoyment of all rights and fundamental freedoms. Kenya has no state religion.

In addition, Kigame said that the Church must play a neutral, prophetic, balanced and truthful role in giving the country true spiritual leadership.

“I strongly believe that the Church must play a neutral, prophetic, balanced and truthful role in giving the country a true spiritual direction. it should congratulate the king, but also be willing to tell the king he is naked if he is,” Kigame stated