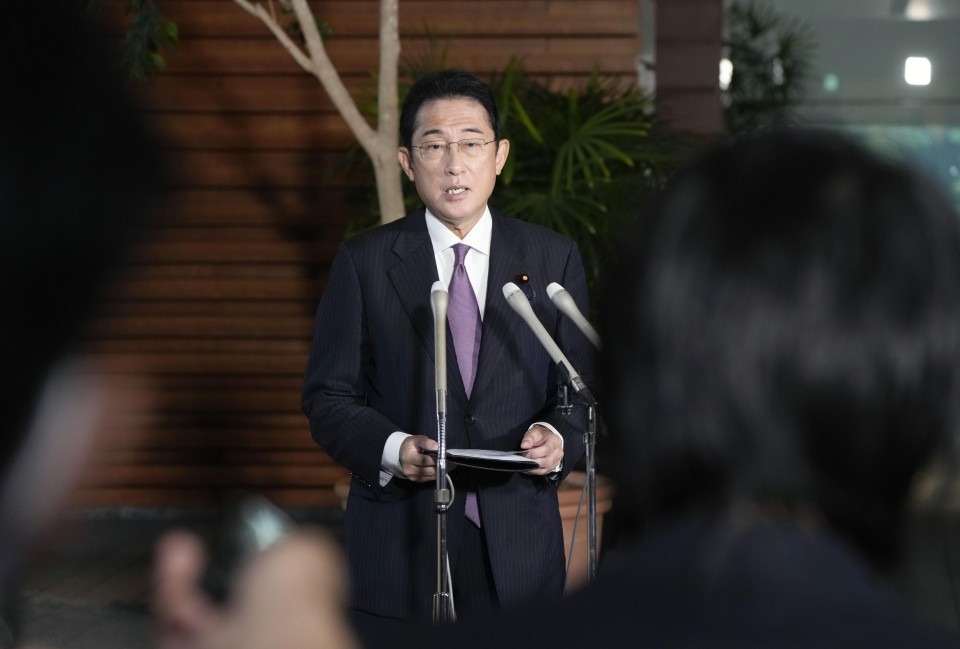 Prime Minister Fumio Kishida left for New York on Tuesday to deliver a speech at the UN General Assembly, with Japan calling for a rules-based international order amid Russia’s invasion of Ukraine and China’s growing maritime assertiveness.

During the trip, Kishida will also arrange to meet with other leaders gathered for the week-long general debate session starting the same day, including US President Joe Biden, diplomatic sources said.

“As the international order has been shaken by the Russian invasion of Ukraine, I will convey Japan’s views, such as strengthening the role of the United Nations,” Kishida said at the prime minister’s office before his departure from Tokyo.

Prime Minister Fumio Kishida speaks with reporters in his Tokyo office on September 20, 2022, before he leaves for New York to attend the UN General Assembly. (TBEN)

His comments came as concerns grew that the UN Security Council has become dysfunctional since Russia – one of five permanent members of the main body responsible for addressing threats to international peace – launched its invasion of Ukraine in late February.

Kishida can also hold talks with South Korean President Yoon Suk Yeol in New York, as Tokyo and Seoul try to improve relations deteriorated by war history and other issues.

In his speech at the UN session, Kishida is expected to advocate for a world without nuclear weapons. Japan will host the Group of Seven summit next year in Hiroshima, where its constituency is located.

The annual UN event comes amid the war in Ukraine and tensions over Taiwan, which has divided US-led major democracies, and Russia and China.

The G-7, made up of Britain, Canada, France, Germany, Italy, Japan and the United States plus the European Union, has imposed economic sanctions on Russia over its invasion of Ukraine.

China has intensified its military activities in the Indo-Pacific region. It held large-scale, live-fire drills near Taiwan last month following a visit to the self-governed island by US House Speaker Nancy Pelosi.

China, which sees Taiwan as a renegade province that must be forcibly reunited with the mainland if necessary, opposes official contact between the island and the United States.

The war in Ukraine has exposed the dysfunction of the UN Security Council. Russia vetoed a US-led draft resolution condemning the invasion, and China abstained.

ALSO READ  OECD lowers global growth outlook for 2023 to 2.2% due to monetary tightening

Kishida will call for strengthening the role of the 193 members of the United Nations and reforming the 15-seat council, Japanese officials said.

To increase momentum towards the entry into force of the Comprehensive Nuclear Test Ban Treaty, Kishida will hold a leadership-level meeting of the “Friends of the CTBT” on the sidelines of the UN meeting on Wednesday, officials said. Representatives from Australia, Canada, Finland, Germany and the Netherlands will also attend.

According to the officials, Kishida is also considering making a speech on the New York Stock Exchange. He is expected to advocate for investment in Japan.

Kishida postponed his departure originally scheduled for Monday to check on damage caused by a strong typhoon in Japan.