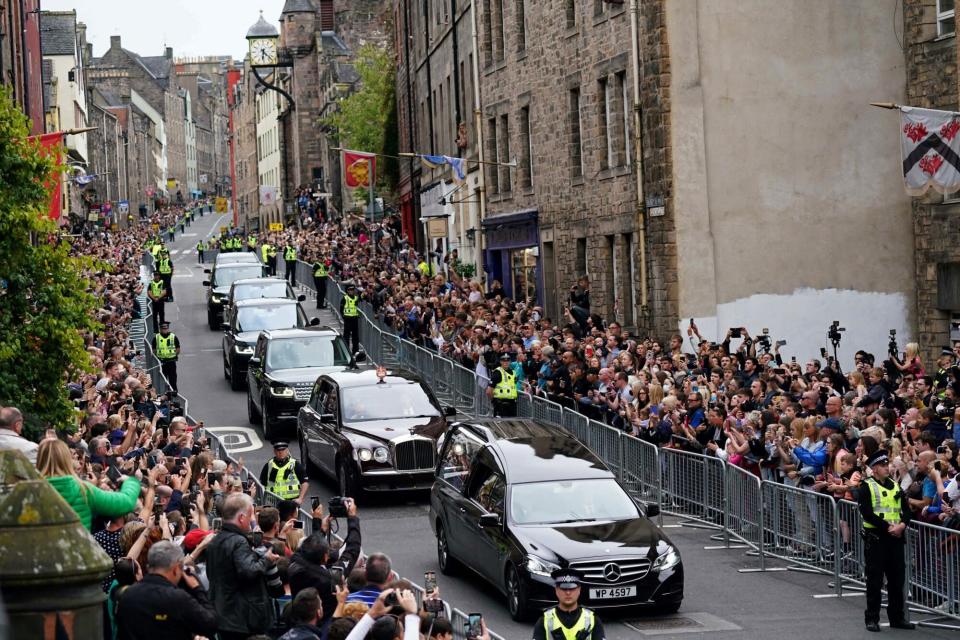 The royal family continues to honor Queen Elizabeth II after her death on Thursday, as her daughter Princess Anne gave an emotional display this weekend.

Princess Anne, standing next to Prince Andrew, her husband Vice Admiral Timothy Laurence and others in Edinburgh, bowed to her mother’s coffin as it entered the Palace of Holyroodhouse this Sunday. The coffin departed Balmoral Castle at 10am GMT on Sunday and traveled to London, decorated with flowers and draped in the Royal Standard of Scotland.

The palace, which it entered while being greeted by Her Majesty’s family, will house the coffin overnight before it travels down Edinburgh’s Royal Mile to St Giles’ Cathedral on Monday. Its ongoing whereabouts can be mapped out all week before Queen Elizabeth’s state funeral on Sept. 19.

The journey from the coffin to the Scottish capital of Edinburgh took six hours and was seen by thousands along the way taking photos and paying their respects to the Queen. Some spectators carried their children on their shoulders to see them better.

The hearse carrying the coffin was see-through at the back, allowing the public to glimpse the coffin as it was dressed in the Royal Standard of Scotland.

RELATED: Where is Queen Elizabeth buried? All about the final resting place of the monarch

While the coffin was en route, PEOPLE confirmed on Sunday that Her Majesty’s beloved corgis will be given a new home after her death as they will reside with the Duke and Duchess of York – Prince Andrew and Sarah Ferguson, aka Fergie.

“The corgis will return to Royal Lodge with the Duke and Duchess. It was the Duchess who found the puppies, which were donated to Her Majesty by the Duke,” said an insider close to the Duke.

Fergie and Andrew, who still live together in their family home in Windsor despite divorcing in 1996, will house the two corgis, a breed that Queen Elizabeth has owned since she was just 7 years old.

According to the source, Fergie “had a bond with Her Majesty through dog walking and riding horses and even after her divorce, she would continue her great friendship with Her Majesty by walking the dogs in Frogmore and chatting.”

Guernsey Literary movie star Lily James spoils herself in Rome, where she was with Dominic West

George Clooney on his twins following his acting footsteps: ‘They can do whatever they want’