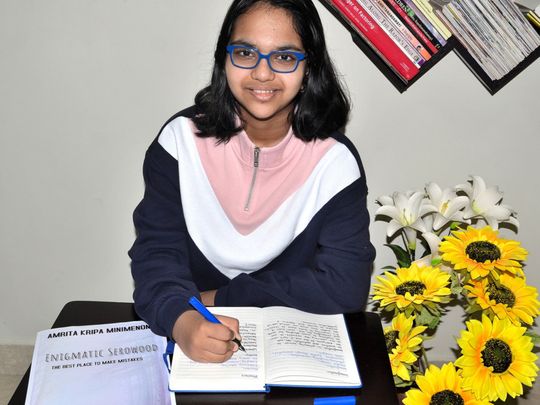 Dubai: From a mysterious city holding a dark secret to a princess fighting storms, there is a lot that UAE students wrote about in their first books during the stay-at-home period earlier this year after the COVID-19 epidemic.

Amrita Kripa Minimenon, a 7th grade student at GEMS Modern Academy in Dubai, had longed to write a book for a long time, but just couldn’t find enough time. But since Amrita “had undeniably had a lot of time this year on my hands” due to the school being closed due to the pandemic, she seized the chance to become a self-published novelist from home. His book “Enigmatic Serowood” is about a group of friends who accidentally meet up after many years in their hometown, where a person has mysteriously disappeared.

His work was inspired by the idea of ​​”anonymity” and his love for intrigue unfolding “a continuous and repetitive conflict, but instead of an antagonist, a team of antagonists brought it to fruition” . Amrita has already written many poems on “various subjects” and is in the process of writing a new book on “Travel and Its Inevitable Emotions”.

“This experience of writing books has taught me that the extent of our imagination is really powerful. We can really imagine miraculous things and it doesn’t matter how close it is or not, as long as you are satisfied with it, ”Amrita said.

Meanwhile, Keara Gajria, a 4th year student at GEMS Founders School – Dubai, wanted to combine two goals in one – encourage kindness and write her first book (preferably with magic in the plot). Her 40-page “Kindness and Magic: In the Winter Village” sees Crystle, a kind-hearted princess, facing a “frightening hailstorm” that has come to threaten her kingdom and her friends.

“I love magic, I love kindness, and I love winter and snow. So I decided to combine them and make a story. I enjoyed creating the characters and [guide someone to produce] the illustrations of my imagination. I first wrote the story down on paper, every day for an hour or two, then typed it. I had my dedicated office to work on my book, ”said Keara, whose mother contacted a publisher to have the book published. Kara enjoys reading (mostly fiction) and writing, and enjoys arts and crafts. While writing her book, which lasted three months, Keara wanted to “encourage kindness in children”.

For 8th year student Amritesh Banerjee, who studies at GEMS Cambridge International School, making computer programming easy to learn was one of the main goals of his first book, “Introduction to Python Programming”. “I used to think of programming as a very difficult subject; everyone thinks like this before trying to study it. But after I tried it, and after my dad encouraged me, it completely changed my perspective on computer programming and I wanted to change other people’s perspectives as well, ”Amritesh said. He had started taking Microsoft courses online and “was amazed at how easy it was to program.” After he finished the book, he had the book revised by a “computer scientist” who works for IBM.

The book, published by Kindle, is written in such a way that it can change the preconceived notion that programming is too difficult, he added. “I had never written a book in my life before, so putting so much content on paper was quite a remarkable experience. I am definitely considering writing another book. The planning phase for my next book is already underway, ”Amritesh said. He did not disclose the subject of the book, but said it would be between 250 and 300 pages, non-fiction, and would be published in just under a year.

At least six other GEMS Education students from various schools wrote individual books during their “quarantine period,” during which the world saw a growth in the literature on the pandemic, a topic some students also focused on. concentrates.

Some other recent student books:

The Stones of Eternity by Adwaith Arun, Grade 7, Jumeirah College