The Public Service Commission (PSC) has flagged a viral ad declaring more than 3,000 job openings in the Ministry of Industrialization, Trade and Enterprise Development as fake.

By means of a statement dated Monday 12 September, PSC clarified that the vacancies listed in the publication did not exist.

The announcement, which is circulating online, is said to have been issued by the Commission’s Chief Executive Officer (CEO) and Secretary Simon Rotich.

Job seekers queuing on Wabera Street, Nairobi, waiting to be interviewed by The Sarova Stanley on May 26, 2018

ALSO READ  NSSF Excluded From Mandatory Withholding From Your Salary

“This is to inform the general public that the ad below circulating on social media is fake,” PSC reiterated.

In addition, the publication claimed that PSC was also looking for 144 P1 teachers, 144 Early Childhood Development and Education (ECDE) teachers, 115 cooks and 12 electricians.

All jobs in the ad that have since been identified as fake are permanent and pensionable.

One of the requirements was that interested applicants should submit copies of a personal identification document and academic certificates.

The public has been warned against falling hook, line and sinker for such scams by scammers. The Commission noted that it exposes them not only to financial losses, but also to data-related crimes.

PSC asked TBEN to look out for vacancies on the official website and in the local newspapers. 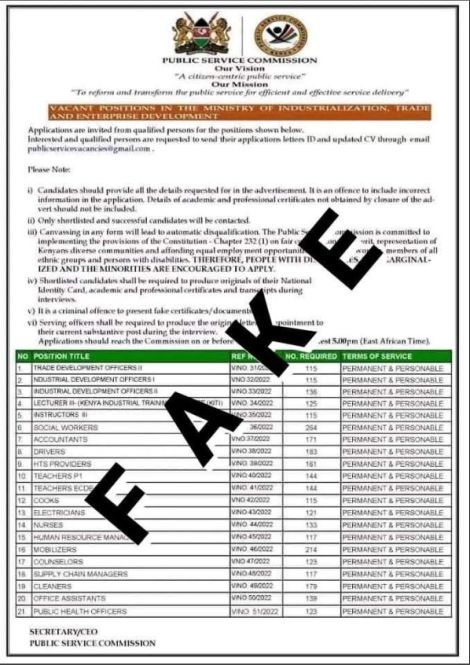