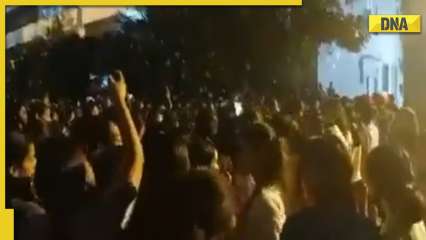 Huge protests have erupted in Mohali’s Chandigarh University after a girl allegedly leaked offensive videos of other students, which are widely shared on the internet. The female student has been detained by police, officials said.

Police and the private university administration have denied social media claims that several girls attempted to die by suicide as a result of the incident, based on rumours. University officials said one of the allegedly affected girls passed out and was hospitalized.

The Punjab Education Minister appealed to the students to keep the peace and enforced strict measures against the culprits. “I humbly request all students of Chandigarh University to remain calm, no one will be spared. It is a very sensitive issue and concerns the dignity of our sisters and daughters. We all need to be very careful, including the media “It’s also a test of us now as a society,” he tweeted.

I humbly request all students of Chandigarh University to remain calm, no one will be spared.

It is a very sensitive issue and concerns the dignity of our sisters and daughters.

We all need to be very, very careful, including the media, it’s also a test for us now as a society. — Harjot Singh Bains (@harjotbains) September 18, 2022

According to reports, the student accused of leaking the videos online is allegedly also demanding money from others for failing to leak them. After the case came to light, hundreds of students staged protests late Saturday night on the university campus and also on the Ludhiana-Chandigarh highway.

The accused students allegedly filmed 60 female students taking a bath and sent the video to a friend, who posted the video to the internet.

Eight female students reportedly attempted suicide after they came to light and were taken to several hospitals.

The Bharat Express News quoted sources as saying that the accused woman had been making such offensive videos for a long time and sending them to a young person in Shimla.

Meanwhile, The Bharat Express News quoted Mohali SSP Vivek Sheel Soni as saying that the woman admitted to sending her photos to her boyfriend, but they checked to see if she also sent photos of other girls.