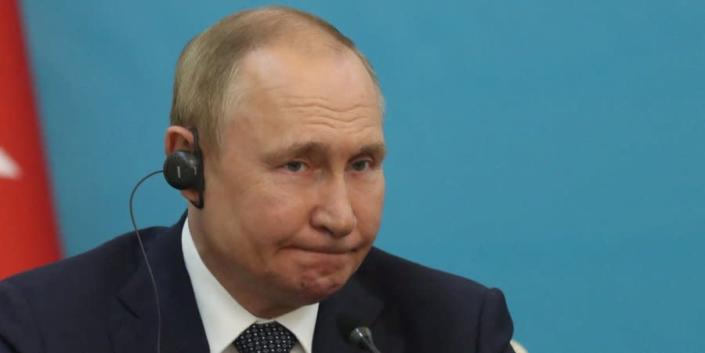 This is when you sign with one hand something that resembles agreements with Turkey and the UN about unblocking Ukrainian ports for grain exports, and with the other you enter the port of Odessa with “Caliber” missiles, while you at the same time time to direct your own media assassins to spread misinformation that Ukrainians themselves have shot at their own strategic object.

And at the same time, from the UN, just received a crappy response of insecure content about the abstract condemnation of shelling. But not Russia, which carries out these attacks. To be fair, Putin knows how to push his own scenarios.

Also read: How Putin Weaponized the Killer of Economies

Taking advantage of both – a developed network of Russian agents, widely incorporated into all international institutions – from the UN to the IAEA, which still has not identified the seizure of the Zaporizhzhya nuclear power plant as an act of nuclear terrorism recognized, and no less a network of foreign Russian-funded politicians and officials.

Such as the ex-chancellor of Germany Schröder, who spends his holidays in Moscow. The capital of the country that started the modern war in Europe. And if you think “money doesn’t smell,” it doesn’t. Now the money from Russia stinks – and it is not their “wooden” rubles, but real dollars and euros. With the blood of Ukrainians killed by the Russians. It’s just that not everyone lets this fact stop them.

What is Putin going to do now and what is he preparing for? Russia is preparing to legalize the occupation of conquered Ukrainian territories. Sometimes it is also called annexation. The custom of hoisting Russian flags playing the Soviet national anthem in conquered Ukrainian cities, of course, does not cause a great deal of commotion.

Usually, such acts of vandalism against international law and all post-war agreements between countries take place in the presence of various local traitors – collaborators, representatives of Moscow and a dozen people of retirement age. But Putin doesn’t care about the picture anymore.

Putin wants to achieve what he set out to do – “connect” Ukrainian territories with Russia under a scenario similar to that of Crimea.

And after that, the Kremlin wants to announce to the West that from this moment on the war takes on a new meaning. American “Himars” will fire at Russian troop concentrations, command headquarters and ammunition warehouses already located in the territory, which in Russia is considered part of the Russian Federation.

At the same time, the pro-Russian lobby in the West will do its job, stop aid to Ukraine and spread stories in the public space about the inadmissibility of direct confrontations between NATO countries and Russia because of the supply of weapons and shelling of objects in the areas. which the Russians recognize as their own.

The Kremlin’s diabolical combination will have its continuation. Putin and his army now need the ceasefire – on his terms. This is when Russia’s occupation forces are not fired upon, but they can fire missiles at any object in Ukraine. With a correspondingly meager response from the UN that Putin is not formally violating anything.

Also read: Panic in the Kremlin. Why does Putin need volunteer battalions?

This “armistice” will resemble the “Peace of Versailles”. After the signing of which the experienced French Marshal Foch said: “This is not peace. This is a 20-year truce.” But in our case, it won’t be 20 years. Think logically: According to analytical centers, including British intelligence, Russia has already deployed 85% of its troops in hostilities in Ukraine, CNN reports.

The Russians need time to recover, regroup, mobilize (hidden or overt), train the mobilized and recover equipment. Putin is trying to negotiate with Turkish President Erdogan about the construction of a factory in Bayraktar in Russia.

As you understand, the construction of the factory is not a matter of one day. Even at an accelerated pace in wartime. Putin thus works from a relatively distant perspective.

Transferring the production of “Bayraktars” to Russia would, of course, be a large-scale betrayal. But I really hope that the President of Turkey will never go there. And not just because he understands the threats to Ukraine. And he is aware of the threats to Turkey itself. In the form of a direct confrontation with Russia, not only in the Karabakh region, but also in the Black Sea in the case of Putin’s advance in Ukraine and the seizure of new territories.

We can send our Turkish friends the history of the Russo-Turkish wars to remind them of the historical context. Although I think Erdogan knows him very well.

So now Putin wants to stop the fire from the Ukrainian side, without stopping at the destruction of Ukraine. And be sure – the scenario of North and South Korea (for those naive people who think Russia will stop at the borders of the Donetsk and Luhansk regions) is impossible.

Putin hates Ukraine so deeply and comprehensively, his propaganda has pumped the minds of Russians so tight that as he takes every settlement in the Luhansk region, he is already planning a siege of Kharkov and bombing of the Dnipro.

And for that, he doesn’t need high-precision weapons and microcircuits from Taiwan. He’s ready to burn the cities with his primitive, still Soviet “Grads”, which cover areas of square miles, but don’t exactly hit a specific target, like the American “Himars”. The “Grad” projectile does not have a GPS navigation system, it flies everywhere according to the ballistic trajectory – to the position of Ukrainian troops, to a school, kindergarten, hospital or simply burns crops in the field.

To replenish the ammunition of these “Grads” in Russian factories working in several shifts, Putin needs time. In the form of this “armistice”. But remember: Putin is preparing for another war.

The conclusion will not be too original. Ukraine needs weapons and ammunition. All this is necessary for the country, which, sorry to remind you, has disarmed its cruise missiles and transferred them to Russia, which is now firing Ukraine with the same missiles. Along with nuclear weapons, the peaceful and naive young state also destroyed its own strategic aviation. Who could also carry ordinary weapons. The same missiles and aerial bombs that would now stop the aggressor in the front line.

Will anyone ever count in money how much of Ukraine’s resources it has put on the altar of world peace? It is somewhat inconvenient to remind you now, but this disarmament took place under pressure and with the support of the West. So now is the time to correct this historic mistake. Yes, it is painful for the economy and expensive to send own resources and money to the distant Ukraine. It is a lot of money and a lot of resources. Much more than has already been shipped.

But it will be even more expensive not to. And then with the same “Himars” to hit their own infrastructure – excellent highways, bridges, schools, which the Russians will use for their headquarters. To stop rusty Russian tanks already on the territory of NATO countries.

Also read: A turning point in Putin’s Russia’s war against Ukraine and the civilized world

Do you think this is a fantastic scenario? And I don’t think so. Putin hates you, our dear Western partners, as sincerely as he hates Ukrainians. In Poland, which is a neighbor of Ukraine, this is at least very clearly understood. The Poles have already set the course to create the most powerful army in Europe. And they call their country the country at the front.

Therefore, the best offer for all Europeans (and thus for Americans, who will not quietly watch the war in Europe) is to increase support for Ukraine. Not to pay with blood for your own freedom. Putin, after all, needs Ukraine not only as a territory. And as an industrial, energy and food base for the great march to the West. Keep this in mind when your government decides on aid to Ukraine.