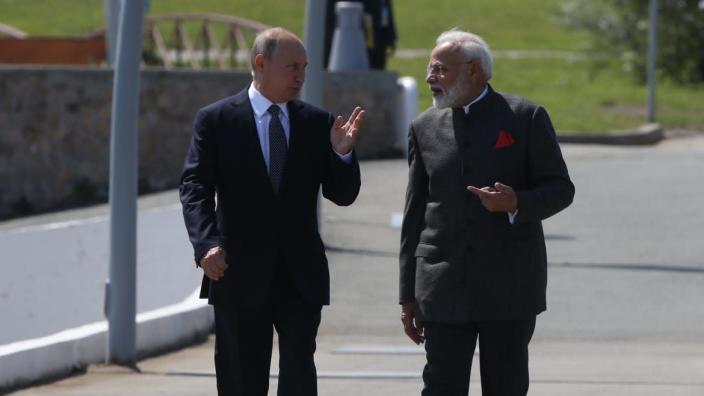 Indian Prime Minister Narendra Modi told Russian President Vladimir Putin in no uncertain terms that he believes Putin’s decision to go to war in Ukraine is a grave mistake.

Modi, who spoke with Putin in Uzbekistan on the sidelines of a Shanghai Cooperation Organization summit, said now is not the time for war, and denounced him for continuing to carry out attacks on Ukrainians nearly seven months after the war. , Reuters said. .

Modi said this was not the first time he expressed distaste for Putin’s war. He said he had warned Putin several times by phone that he disapproved of the war.

“The present era is not an era of war, and I have spoken to you on the phone about this several times… in the coming days, how we are moving towards the path of peace – we will certainly have the opportunity to discuss this,” Modi said, according to a translation from the director of The India Project at the Brookings Institution, Tanvi Madan.

Russian President Vladimir Putin feels pressure from all sides to withdraw from the war in Ukraine. Modi’s public rebuke comes just a day after Putin held an important face-to-face meeting with Chinese President Xi Jinping, during which Putin publicly acknowledged Xi’s “concerns” about the ongoing war in Ukraine.

Putin’s plot to charm China is about to explode

Both of Putin’s meetings with Modi and Xi were the first face-to-face meetings he has held since launching the war in Ukraine earlier this year, marking a rare moment when key geopolitical partners warn Putin that they have lost faith in him and his. decisions.

The public displays of mistrust could mark a major turning point in the war. India and China have both tended not to publicly criticize Russia since Putin launched the war. Both abstained from a vote on Russia at the United Nations that Russia deplored for the invasion.

Support for the Russian war has never been certain. China has not explicitly endorsed the war in Ukraine, although Beijing has previously suggested it believes the United States is the main instigator of the war, echoing the Kremlin’s talking points. The White House has expressed concern about China supporting Russia during the invasion and indicated early in the war that there would be consequences if China went too far.

Since then, the State Department has characterized China’s efforts not to collide with the United States, nor to attack Russia outright, as verbal and “geopolitical gymnastics” while trying to “avoid open criticism of Russia’s war against Ukraine.” .

ALSO READ  Russian partners such as China and India who expressed concern over Ukraine may have forced Putin to end the war quickly, a Russian scholar says.

India, a top recipient of Russian weapons, has also worked diligently to follow the line. In recent months, as Russia faced sanctions over the invasion, India has made efforts to make more equipment domestically, according to Reuters.

For Putin, the criticism is just the latest in a series of criticisms that have come his way as his troops began withdrawing from key areas in the Ukrainian armed forces with successful counter-offensive. Moscow and St. Petersburg ministers have said he must resign. Ramzan Kadyrov, a Putin ally in Chechnya, has suggested he thinks Putin should change his tactics in the war. Putin himself recently canceled an important meeting with Russian military advisers.