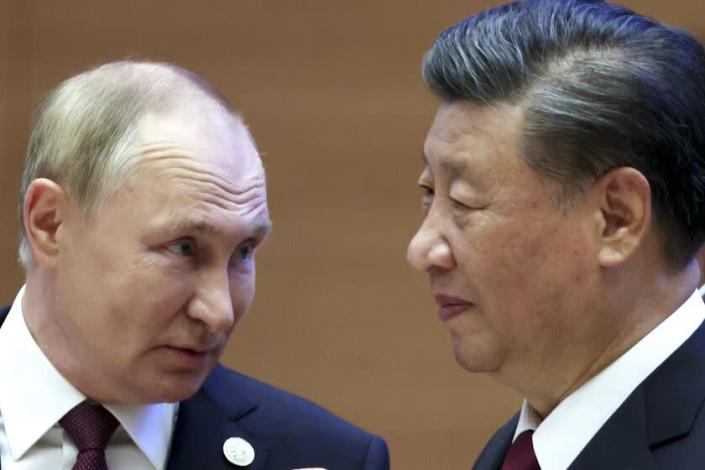 Russia’s imperious president Vladimir Putin may have just endured his worst week since the collapse of the Soviet Union, which he believes was the greatest tragedy of the 20th century.

His vaunted army, including a tank force once considered one of Russia’s best, collapsed during a Ukrainian offensive in eastern Ukraine. Some Russian soldiers fled after dropping their uniforms and donning civilian clothes stolen from homes, according to local residents.

In southern Ukraine, Russian units defending the strategic city of Kherson struggled to hold their positions against continued Ukrainian attacks.

Putin even faced what sounded like tough questions from his main ally, Chinese President Xi Jinping.

“We understand your questions and concerns” about Ukraine, he told Xi at a summit in the Central Asian city of Samarkand, Uzbekistan.

When Putin ordered his army to invade Ukraine in February, he saw a historic opportunity to reunite the core of the Soviet Union and appeared to expect a quick victory.

That plan failed when Ukraine, backed by Western military aid and US intelligence, halted Russia’s attempt to take its capital, Kiev.

Now Putin’s Plan B, the conquest of eastern and southern Ukraine, is also teetering on the brink of failure.

Some cheerleaders have hailed Ukraine’s victory at Izyum, a major railway junction in the east, as the turning point of the war. That’s premature. Russia owns about a fifth of Ukraine’s territory and has more troops it can deploy, although their quality is uncertain.

“Despite the euphoria, this is not over,” Alexander Vershbow, a former US ambassador to Russia, told me last week. “Putin is clearly furious that his commanders have failed… but that doesn’t mean he’s giving up. He can escalate in many ways.”

So what can we expect from Putin now? Vershbow offered a prediction.

Putin will not capitulate; that would mean the end of his rule.

He is likely to intensify the death and destruction that Russia has inflicted on Ukrainian citizens.

Putin’s career was marked by success in wars against weaker opponents. He came to power in 1999 by ordering a midwinter siege of Grozny, the capital of the Russian republic of Chechnya, in a brutal war to suppress Muslim separatists. In 2008 he sent the army to neighboring Georgia; in 2014, he sent troops to eastern Ukraine and annexed the Crimean peninsula.

In those wars, his troops have often inflicted civilian casualties as a deliberate tactic.

His approach in Ukraine fits the same pattern. It just didn’t work that well against a well-managed, well-trained and well-equipped opponent.

“We are going to see a further escalation of brutality,” Vershbow said. “They have already launched heavy bombing raids on civilian infrastructure. … Some [Russian] Officials say they want to drive millions of Ukrainians out of the country.”

Putin’s goal, he said, is to “turn this back into a war of attrition…and hope that war fatigue will prompt Ukrainians to quit over time.”

To achieve that, some aggressive Putin supporters have demanded full mobilization, which includes conscription to replenish the military and a formal declaration of war.

But Putin staff have said conscription is not being considered.

The government has continued to assure the Russians that this is a limited “military special operation” and has even banned describing it as a “war”.

“He’s still desperately trying to avoid mass mobilization,” Vershbow said. “A draft would send protesters onto the streets of Moscow. Even then, it takes months and months to train new troops.”

Michael Kofman, a Russia expert at TBEN, a defense think tank, suggested Putin could opt for a “partial mobilization,” extending current service contracts for soldiers and drafting recent veterans with the necessary skills.

“Partial mobilization is possible, but it could be bad troops,” Vershbow said.

As for nuclear, chemical or biological weapons, most military and foreign policy experts say Putin is unlikely to use them unless his very existence is directly at stake.

“The problem with most escalating options, up to and including nuclear weapons, is that they can easily unite Europe, paint Putin himself as a Hitlerian monster, and accelerate Western arms deliveries to Ukraine,” said Stephen Sestanovich, a former National Security Agency official. Security Council. now at Columbia University.

Putin’s other hope is to win the war not on the battlefield, but in Western Europe, where Moscow has cut off the supply of natural gas to squeeze out Germany and other consumer countries that have sent weapons to Ukraine.

So far, the energy war has had surprisingly little effect. A recent poll showed that 70% of Germans support aid to Ukraine, despite rising gas prices. In the United States, the Gallup Poll found a similar level of support, 76%.

However, the real test will come this winter, when the need for gas to heat homes will increase sharply.

On both fronts, Putin hopes that inflicting pain on non-combatants can bring him victory. He believes that Russians are better fighters than Ukrainians and more resilient in winter than Europeans or Americans. The challenge for the West is to prove it wrong.

This Is What Putin’s Nuclear Disaster Would Really Look Like

Putin puts US officials on edge with nuclear saber chatter

Putin puts US officials on edge with nuclear saber chatter