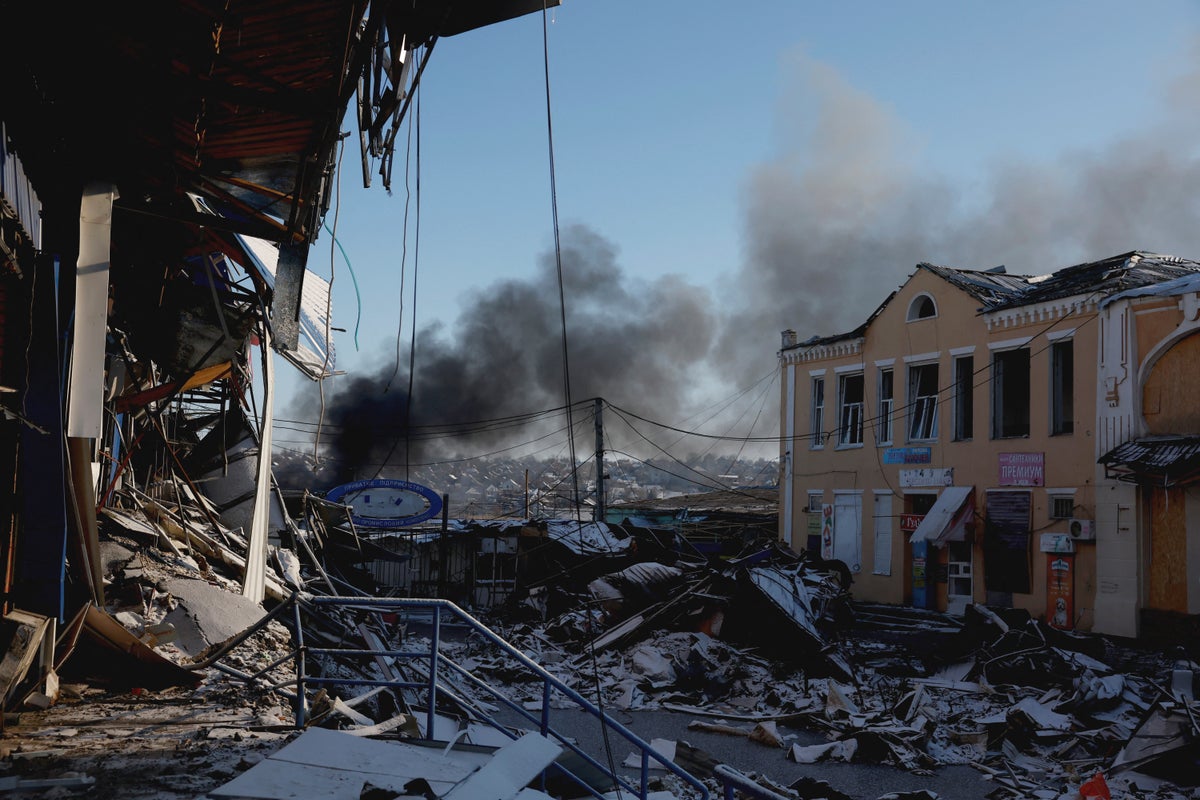 Russian soldiers step over the bodies of soldiers from their own unit in the war in eastern Ukraine, where fighting has accelerated, especially in Soledar and Bakhmut, as Moscow has deployed more fighters with help from the Wagner group.

Soledar, a critical strip of land in the industrial Donbas region, has seen bitter fighting between soldiers from Ukraine and Russia, along with some of their heaviest losses in warfare.

The fighting in Bahkmut and Soledar is “the most intense of the entire frontline,” with little progress on either side in the freezing cold, Ukrainian military analyst Oleh Zhdanov said.

He added: “So many (pro-Russian fighters) remain on the battlefield… dead or wounded.”

Ahead of a larger military offensive, Volodymyr Zelensky appears to be relying on securing more and advanced weapons from Ukraine’s western allies to repel these attacks and inflict damage on Russian forces.

Mr. Zelensky assembled another round of diplomatic efforts with European ally and Czech President Petr Fiala, who is also the current president of the 27-member European Union.

“I’m sure our soldiers at the front will get these weapons and equipment. Very soon,” Zelensky said.

Ukraine is already getting Patriot anti-missile defense systems and Bradley fighting vehicles from the US in a major arsenal boost, along with lightweight tanks from France as reluctant aid as Emmanual Macron insists on not getting into direct conflict with his Russian counterpart Vladimir Putin.

Volodymyr Zelensky has said that there is no life and no whole wall left in Soledar, where Russia is said to have concentrated its military power now in the 11th month of the war.

“Bakhmut and Soledar, Kreminna and Svatove, general outlook in Donbas for the coming weeks. The battle for Donbas continues. And although the invaders have now concentrated their greatest efforts on Soledar, the result of this difficult and long battle will be the liberation of our entire Donbas,” Zelensky said in his nightly speech.

He said that Ukrainian fighters in Soledar are resisting new and even harder attacks from the Russian soldiers.

“It is extremely difficult – there are almost no whole walls left… Thanks to the resilience of our warriors there, in Soledar, we have gained extra time and extra power for Ukraine,” he said without sharing more details.

“And what did Russia want to achieve there? Everything is completely destroyed, there is almost no life left. And thousands of their people were lost: the whole land near Soledar is covered with the corpses of the occupiers and the scars of the strikes. This is what madness looks like,” Zelensky said.

The men, aged 28 and 48, were last seen on January 6 on their way to the town of Soledar, where fighting has been particularly fierce in recent days. There has been no contact with the pair since they left Kramatorsk for Soledar at 8am on Friday morning.

The two missing men have been identified TBEN as Andrew Bagshaw, 48, and Christopher Parry, 28. Mr. Bagshaw was born in the United Kingdom but now lives in Christchurch, New Zealand.

A Ukrainian friend and former flatmate of Mr Parry in eastern Ukraine said the pair received a call on Friday to help evacuate civilians.

The route they should take, which one TBEN has seen bypassing the edge of the city close to Russian positions and may have penetrated areas overrun by a moving frontline, when Moscow launched a major attack.

Russian soldiers step over the dead bodies of soldiers from their own unit in the war in eastern Ukraine as heavy fighting ravages the region, especially in Soledar and Bakhmut.

Ukrainian military analyst Oleh Zhdanov also called the fighting in Bahkmut and Soledar “the most intense on the entire frontline”, with little progress on either side in the freezing cold.

“So many (pro-Russian fighters) remain on the battlefield… dead or wounded,” he said.

How has war changed love and relationships in Ukraine?

Winter is predictable, but each year it blinds organizations unprepared to help refugees through the coldest months.

While Ukraine has turned the spotlight on the hardships caused by freezing temperatures, this crisis is happening around the world every year, writes Josie Naughton.

Twitter owner Elon Musk has sparked another debate on social media after he described tanks as “deadly decoys” that should not be used in Russia’s war against Ukraine.

“Tanks are now a death trap,” Musk tweeted before drawing parallels to World War I. “Since neither side has air superiority, that leaves infantry and artillery – essentially WW1.”

The tech tycoon’s comments came as Ukraine received tank-destroying armored vehicles in its latest multibillion-dollar package of US military aid.

This included 50 Bradley armored vehicles and 500 anti-tank missiles that they can fire. Germany also announced that it would provide about 40 Marder armored personnel carriers and France promised AMX-10 wheeled RC tank destroyers.

Western countries have stopped supplying Ukraine with heavy tanks that could be used for offensive operations, despite Kiev saying it needs them. In a video message thanking France’s Emmanuel Macron for the AMX-10s, Ukrainian President Volodymyr Zelensky said: “There is no rational reason why Ukraine has not yet been supplied with Western tanks.”

The Biden administration said on Monday that Iran’s sale of deadly drones to Russia for use in its ongoing invasion of Ukraine means the country may be “contributing to widespread war crimes.”

National Security Adviser Jake Sullivan leveled the charge against Iran on Monday when he spoke to reporters who accompanied President Joe Biden on a trip to Mexico. While not a sign of a policy change, the indictment marked some of the sharpest US rhetoric against Iran since it began supplying arms to Russia to support its nearly year-long war in Ukraine. It comes as the U.S. and European partners look to further ostracize both nations in the court of public opinion as they face challenges in physically stopping the transfer of weapons that Russia increasingly relies on.

Sullivan said Iran had chosen “to go down a path where their weapons are being used to kill civilians in Ukraine and to try to plunge cities into cold and darkness, which from our point of view puts Iran in a place where it can potentially contribute to widespread war crimes.”

Looking ahead to a likely spring offensive, the US and Germany are sending Ukraine a series of armored vehicles, including 50 tank-killing Bradleys, to expand its ability to move troops to the front lines and bolster its forces against Russia as the war approaches its first anniversary.

The vehicles do not meet Ukraine’s request for main battle tanks. But they provide a strategic war capability as the change of season brings muddy terrain and Ukraine launches an aggressive campaign to regain territory taken by Russia, particularly in the east.

Britain is considering supplying Ukraine with tanks for the first time to help the country fight Russian forces, it has been reported.

Talks have been taking place “for a few weeks” about supplying the British Army’s Challenger 2 main battle tank to Ukraine, sky news reports a Western source with knowledge of the talks.

The broadcaster quoted a source as saying Britain could offer around 10 Challenger 2 tanks. The move would mark a major advance in Western support for Ukraine, with the potential to push other NATO allies, such as Germany, to emulate.

The government has not yet taken a final decision on a possible increase in its military support to Ukraine, but if given the green light, the UK would be the first country to heed Kiev’s pleas for more powerful Western tanks.

The Defense Department neither confirms nor denies sky news‘s report, but said in a statement that the UK will “continue to build on recent donations with training and further equipment donation”.