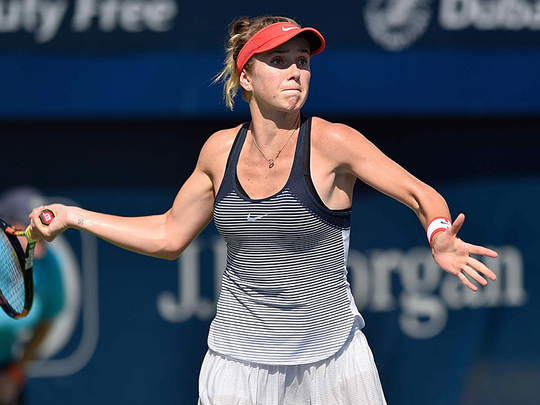 First seed Kaja Juvan took just 51 minutes to rule out Slovakia’s Rebecca Sramkova 6-1, 6-2, while third-seeded Belgian Greet Minnen had to dig deep for her victory 6-2, 3-6, 6-4 against American Varvara Lepchenko later in the afternoon.

Former multiple Grand Slam doubles champion and seventh seed Timea Babos with a 6-2, 6-7, 6-2 win over Slovak Anna Karolina in two and a half hours on court 2 was also assured of ‘an appearance in the main draw.

Other top names to qualify for Melbourne were French Open and US Open quarter-finalist Tsvetana Pironkova with a 6-3, 7-5 victory over 14th seed Margarita Gasparyan of Russia while Italy’s Sara Errani left him late for a 3-6, 6-2, 6-4 win over Croatian wild card Ana Konjuh.

The highlight of the day, however, was the effortless entry of seed Juvan, currently ranked 104th on the WTA Tour.

The 20-year-old from Ljubljana has spent less than three and a half hours on the court in her three qualifying rounds this week. Juvan took 83 minutes to open against Australian wild card Storm Sanders, another 75 minutes to overtake Ukraine’s Anhelina Kalinina on Tuesday before sweeping Sramkova in just 51 minutes to secure her place in the Australian Open main draw which starts from February 8.

Third-seeded Minnen and Babos had daring three-set confrontations with their respective opponents. Minnen, 23, was stretched out the distance before defeating Varvara Lepchenko 6-2, 3-6, 6-4, while Babos put in two and a half hours for a 6-2, 6-7, 6-2 just as courageous. defeating Anna Karolina Schmiedlova from Slovakia.

Minnen has a career-high WTA ranking of 103rd in singles which she achieved in March last year and 124th in doubles in August 2019. The Turnhout-born girl made her WTA main draw debut Tour at BGL 2018. The Luxembourg Open in the doubles draw with his partner Alison Van Uytvanck, where they won the title.

Former world No. 1 in doubles and multiple Grand Slam winner, Babos had a career high in singles, No. 25.

As a junior, the 27-year-old had achieved significant results, including three Grand Slam junior doubles titles in 2010 – the Australian Open, Wimbledon and the US Open – all with American Sloane Stephens as partner.

Egypt’s Mayar Sherif made the Arab world proud with an emphatic 6-1, 6-2 victory over Serbian Aleksandra Krunic to make her very first Grand Slam appearance next month.

Cairo-born Sherif, 24, whose older sister Rana also plays on the Tour, made her WTA singles debut at the 2020 Prague Open in August. The following month, the young Egyptian became the first Egyptian player to advance to the main draw at Roland Garros.

It was the first time that Australian Open qualifiers had been played on foreign soil, simultaneously in Dubai and Doha. Wednesday’s 16 successful players will be joined by players eligible for a “ Lucky Losers ” spot and will travel to Melbourne in time to complete a mandatory 14-day quarantine before the season’s first Grand Slam at Melbourne Park. February 8 to 21.

The Bharat Express News - January 28, 2021 0
President Muhammadu Buhari has signed the Coronavirus Disease Health Protection 2021. The regulation makes the use of face masks mandatory in public places, as Nigeria...