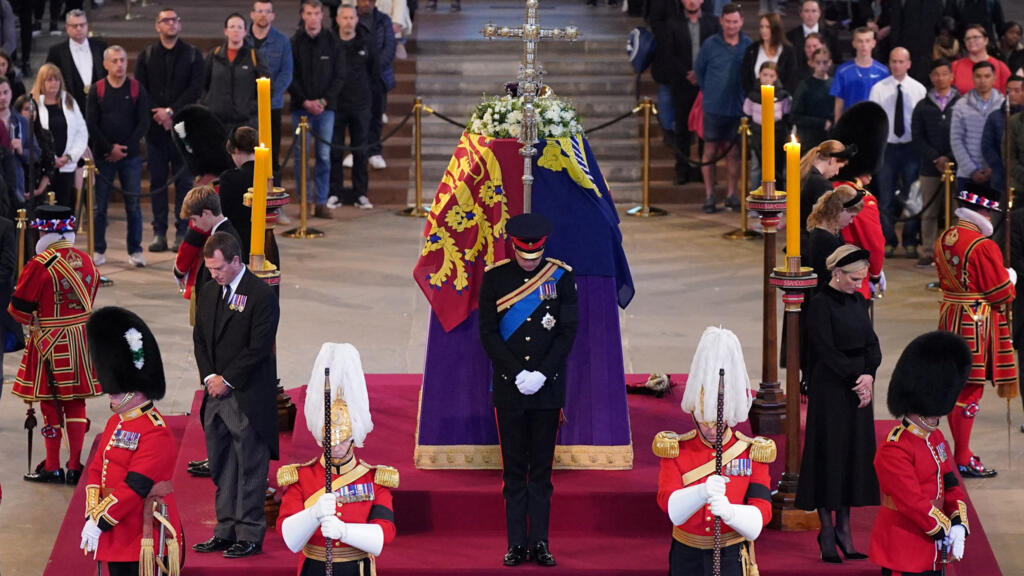 Queen Elizabeth II’s eight grandchildren held a vigil around her coffin on Saturday, their heads bowed in silence as a line of mourners streamed past the recumbent monarch’s state.

The two sons of King Charles III, dressed in military uniforms, stood in silence during a fifteen-minute vigil in the huge Westminster Hall where the coffin has been lying since Wednesday, draped in the Royal Standard and with the bejeweled Imperial State Crown on top.

Prince William and Harry were joined by their six cousins, including Princess Beatrice and Eugenie, who previously paid tribute to Britain’s longest-reigning monarch.

“You were our matriarch, our guide, our loving hand on our back that led us through this world,” said the sisters, daughters of Prince Andrew. “You taught us so much and we will cherish those lessons and memories forever. For now dear grandma, we just want to say thank you.”

Earlier Saturday, Charles and his heir, William, paid a surprise visit to meet people queuing to pay their respects to the late monarch.

To cheers of “hip, hip, hooray” and cries of “God save the King,” Charles walked past part of the line, waiting to see the Queen lying-in-state, and asked those in line how long they had been there and if they were warm enough.

ALSO READ  Is Rishi Sunak ready for a comeback due to the declining UK economy?

Prince William also spoke to the crowd to pay tribute to the Queen who died last Thursday at the age of 96.

Tens of thousands of people have already streamed past the coffin in a steady, solemn stream, queuing for hours through the dark and cold to pay their respects to Britain’s longest-reigning monarch – a testament to the affection in which they was held.

On Saturday morning, the culture department said it would suspend access to the queue if demand got too high, at 1am. (0000 GMT): “Please don’t travel.”

The Queen’s death on September 8 at her summer estate in the Scottish Highlands has sparked a flood of emotions across the country and 10 days of highly choreographed events.

After the coffin sat for 24 hours in the Scottish capital, it was flown south to London, where tens of thousands of people crowded a normally busy road in the driving rain to watch the flag-draped coffin being wheeled to Buckingham Palace.

ALSO READ  What will be open tomorrow during the holiday?

On Friday evening, King Charles joined his three siblings – Princess Anne and Princes Andrew and Edward in a silent vigil at the coffin, while their eight children, including William and Harry, will form their own ceremonial guard later on Saturday.

Like many, Sarah Boniface, a 60-year-old real estate agent, was in tears and emotional as she left the grand Westminster Hall on Friday night after standing for 14 hours after watching the new king hold the vigil as she walked past the coffin.

“It’s been worth every minute. Every minute,” she said, visibly holding back her tears. “I’m so lucky to have paid the Queen my respects and seen our new King.”

Debts to the Queen

For retiree Hasmukh Vara, 62, his decision to stand for 13 hours to observe the reclining in the state reflected his desire to thank the late monarch – and Britain – after coming to the island from Kenya in the 1970s. country had moved.

When he emerged from the huge, brightly lit hall into the cool Friday night darkness by the River Thames, he described himself as “very, very high”.

ALSO READ  Petition against Putin: 'Resignation would be a peaceful way out'

“We came to this country as refugees,” he told Reuters. “All my life I’ve been indebted to her for giving us a home. It’s something we can never, ever forget. It’s a big deal for me and my family.”

The Queen’s children have described being overwhelmed by the reaction to their mother’s death.

Monday’s state funeral, attended by nearly 100 presidents and heads of government, including those from the United States, France, Australia, Japan, Jamaica and Canada, will likely be one of the largest ceremonial events ever held in Britain.

On Friday, New Zealand Prime Minister Jacinda Ardern walked past the coffin – one of the first leaders to arrive. The Prime Minister of the Canadian province of Alberta, Jason Kenney, described the meeting in central London as “this huge, diverse gathering of people from all over the world”.

Police said a man had been arrested after a disturbance near the coffin on Friday night, who was being held for an offense under the Public Order Act.

(TBEN with TBEN and Reuters)