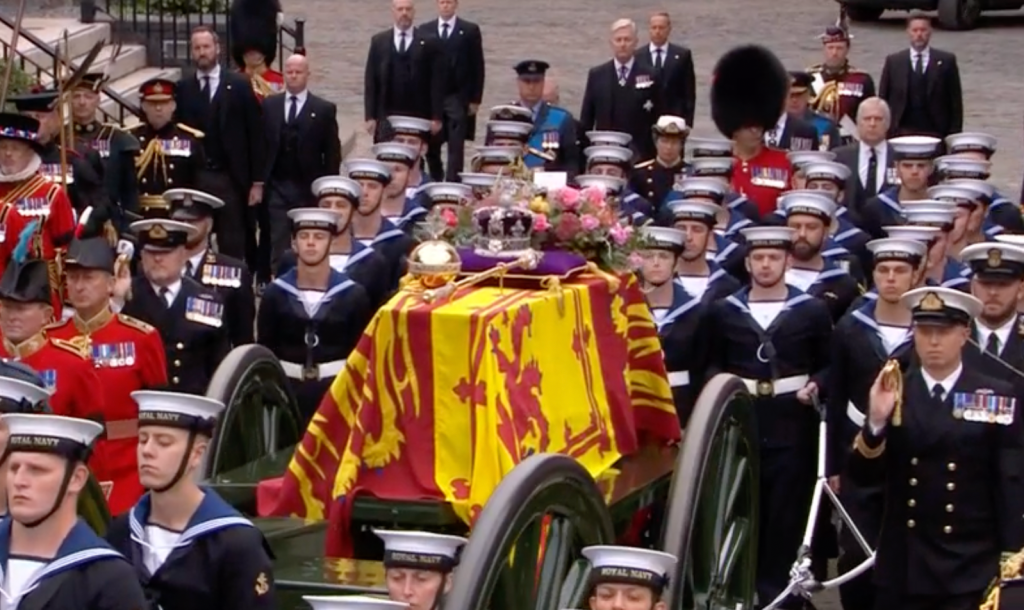 Silence has fallen over the city of London, save for the mournful sound of bagpipes. For the first time since 1965, the capital will host a state funeral procession as the country bids farewell to Queen Elizabeth II.

The new King Charles III led the procession that passed behind his late mother’s coffin this morning as it was taken from Westminster Hall to the nearby abbey for her funeral service.

Members of the Royal Family walk behind the Queen’s coffin as a procession departs from Westminster Hall to Westminster Abbey.

Prince William – now the Prince of Wales – walked alongside the Duke of Sussex and other members of the Royal Family as the Queen’s casket was carried on the State Gun Carriage, drawn by 142 sailors. The carriage was used in 1952 by the Queen’s father, George VI, and was last seen in public in 1979 for the funeral of Prince Philip’s uncle, Lord Mountbatten.

Thousands of soldiers also took part in the procession that lasted exactly 16 minutes between the Hall and Westminster Abbey, where the Queen’s funeral service began at 11am.

For the past five days, the queen lay in state, where thousands of mourners lined up to pay their respects. The last mourner walked past the Queen’s catafalque at 6:30 this morning.