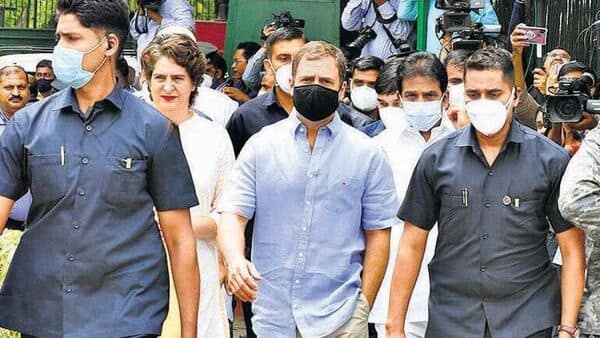 Senior Congress leaders Rahul Gandhi and Shashi Tharoor were detained along with other party members by Delhi police during a protest against the central government over price hikes and unemployment in the national capital on Friday, according to the news agency. ANI.

Rahul Gandhi said all Congress MPs marched to Rashtrapati Bhawan to raise the issue of inflation and price hike, but they are not allowed to proceed from here. He also claimed that some MPs were beaten by the police officials.

Delhi | All Congress MPs marched to Rashtrapati Bhawan to raise the issue of inflation and price increase but they are not allowing us to proceed from here. Our job is to address the people’s problems…Some MPs arrested, also beaten: Congresswoman Rahul Gandhi in Vijay Chowk pic.twitter.com/qLrBNEhxti

Earlier in the day, Rahul Gandhi claimed at a press conference that India is witnessing the “death of democracy” and that anyone who opposes the beginning of the dictatorship is “being brutally attacked”.

“We are witnessing the death of democracy. What India has built brick by brick, begun nearly a century ago, is being destroyed before your very eyes. Anyone who opposes this idea of ​​the beginning of a dictatorship will be brutally attacked, imprisoned, arrested and beaten,” the former head of Congress said.

“The idea is that people’s problems – be it price rises, unemployment, violence in society – should not be discussed. That is the only agenda of the government and the government is carried out to protect the interests of 4-5 people and this dictatorship is run for the sake of 2-3 big business people by 2 people,” Rahul Gandhi further said.

He also claimed that the government is run to protect the interests of four to five people and that this “dictatorship” is run in the interest of “two to three great businessmen by two people”.