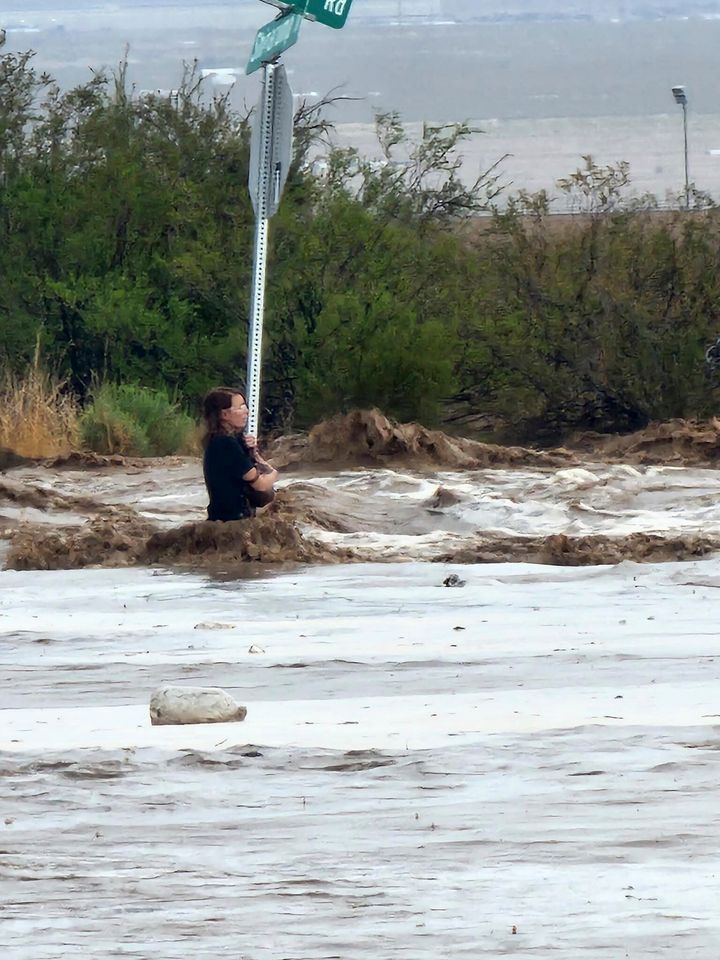 LAS VEGAS (TBEN) — Intense summer thunderstorms that drenched parts of Las Vegas — pouring water from casino ceilings and pool onto the carpet of a stadium-sized sports betting area — were part of a broad regional monsoon pattern that could repeat through the weekend , a National Weather Service official said Friday.

“We’re getting right into the heart of the most active part,” said John Adair, an experienced meteorologist at the weather services office near Harry Reid International Airport in Las Vegas. “This is turning out to be a pretty active monsoon season, compared to the last five years or so. There are many more opportunities for thunderstorms.”

The annual weather pattern in recent weeks has led to a parade of storms in the US Southwest that has resulted in flooding in normally dry washes, rain measured in inches and rescue operations.

In Arizona, a driver had to be rescued from a vehicle that got stuck in the water off Apache Junction. A youth protection team was leaving the red truck they were driving at Canyon de Chelly National Monument on the Navajo Nation when it got stuck in the mud and the water surged around it. The Mohave County Sheriff earlier this week rescued a woman clinging to a stop sign after her car was swept away.

Parts of the Hualapai Mountains in Mohave County have received up to 15.2 inches of rain in recent days, Adair said. The National Weather Service said parts of Arizona can expect 1 (2.5 centimeters) to 2 (5 centimeters) inches of rain per hour before a flood watch expires Saturday morning.

ALSO READ  Green Funds Might Save the World, But Here's Why They're Failing Investors

While the rain is welcome in a region ravaged by drought, it is causing headaches for neighborhoods where wildfires have stripped the land of vegetation, which normally delays and partially absorbs flooding.

New Mexico Governor Michelle Lujan Grisham said Thursday that the Federal Emergency Management Agency has granted a request to include in the state’s disaster declaration the effects of flooding and mudslides in certain counties affected by massive wildfires this year. .

In northern Arizona, residents of Flagstaff have become accustomed to constant alerts on cell phones and sirens in neighborhoods warning of impending flooding.

Bret Henneman estimates he has about 3,500 sandbags around his home just north of Flagstaff, where two wildfires burned this spring. His wife was babysitting and had the back door open two weeks ago when heavy rain fell and a few inches of rain and mud poured through the house.

They now cringe with every flood warning.

“We still need the rain and stuff and we really need the monsoons here,” says Henneman, who is staying with family while his house dries. “It’s just that wildfires have changed everything. So yeah, when it rains, we’re scared.”

Parts of Arizona, including the cities of Heber, Show Low, Bellemont and Prescott, have so far been falling near or more than 200% of normal rainfall during the monsoon, which began on June 15 and runs through September. However, the weather pattern is hit and miss, meaning some places like Payson are well below normal.

“There’s not really a good explanation for why that happens, but that’s the nature of storms,” ​​said Valerie Meola, a meteorologist with the Weather Service in Flagstaff.

Jacquetta Brown was walking on a trail in Canyon de Chelly near Chinle, Arizona this week when torrential rain broke through and she saw the red truck partially submerged. The rain is a boon to crops that families plant in the canyon and to livestock, she said, but the monsoon also has a downside.

“We have dirt roads here and if we can’t cross the laundry, we can’t go to work or school,” Brown said.

While just 0.3 inches (0.76 centimeters) of rain was recorded at the Las Vegas airport late Thursday, more than 1 inch (2.5 centimeters) fell just one mile away at the University of Nevada, Las Vegas. said Adair.

Nearby gusts peaked at 71 mph (114 kph) and knocked down trees. Pea-sized hail fell from the lightning-fast skies in Henderson’s suburbs, which saw nearly an inch of rain falling in some areas.

Police, county and city officials and the weather service said no injuries or widespread damage were reported.

Casino customers posted videos from water pouring from ceilings at the Caesars Palace and Planet Hollywood resorts on the Las Vegas Strip and from behind a huge video screen at the hotel casino sportsbook in downtown Circa. A video showed a man betting on a casino slot machine as water fell around him.

“Last night’s weather took Vegas by storm and we were no exception,” Stevens said Friday. “But the show must go on and I’m happy to report that repairs are underway.”

The string-locked sportsbook seats were expected to reopen over the weekend, he said.

Adair said the Las Vegas area usually receives about 4.2 inches (10.7 centimeters) of rain per year, but the official measuring station at the airport has recorded less than 0.7 inches (1.8 centimeters) by 2022.

The surface level at the region’s drought-stricken water supply — the Lake Mead reservoir behind the Hoover Dam on the Colorado River — has fallen to less than 30%.

While runoff from storms in the Las Vegas area will reach the lake, the moisture from the monsoon likely won’t affect the ongoing regional drought, Adair said.

“For that, we generally rely on the winter season, where we get multiple storms in the Pacific that cover a large area with rain and snow,” the meteorologist said. “That can have a significant impact on drought.”