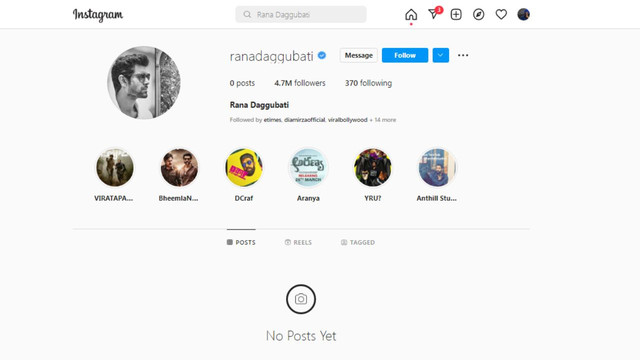 Popular Southern actor Rana Daggubati, who attracted attention with his performance in Baahubali, recently visited Tirumala with his family. His fans came there to see the actor and take selfies with him.

However, Daggubati snatched the phone from one of his fans when he tried to take a selfie with him. He later handed the phone back and said the temple is not a place to take pictures. The video of the same has gone viral on social media.

Earlier, Rana Daggubati deleted all his posts on Instagram and shocked his fans by leaving his Instagram profile completely blank. Before deleting all the photos, the actor said he would be on “social media sabbatical” soon.

A few days ago, Rana took to his Twitter and wrote, “Work in progress! Take a social media sabbatical. See you in the cinema, Bigger. Better. Stronger, much love to you all.” Rana celebrated his second wedding anniversary with wife Miheeka Bajaj on Monday and his wife even posted some beloved photos with him. Meehika dropped a series of photos with the actor.

Shortly after Rana’s post, several of his fans became concerned and shared his concern. One fan wrote: “hmm and for me it’s all the more a nice experience to see you on big screens after seeing them as world class premieres from the classroom (room) i saw you … now stay blessed and always sweet.” Another fan said: “Be happy and stay safe Anna … Let’s hit hard this time … beware.” One netizen commented: “Wishing you all the best sir..enjoy the social media break and come back to rule the movies!! Pay attention…”

On the work front, Rana was last seen in Virata Parvam alongside Sai Pallavi. The film was a blockbuster and could only gross 12 crores. However, Rana received a lot of appreciation from critics for his role. He was also featured in ‘Bheemla Nayak’ earlier this year, which was a huge box-office hit. Pawan Kalyan and Samyuktha Menon starred in the film together. Rana will next be seen in Marthanda Varma, a drama film from the Malayalam period. The film shows the glory of Marthanda Varma, the famous king of Travancore. He belonged to the 18th century AD