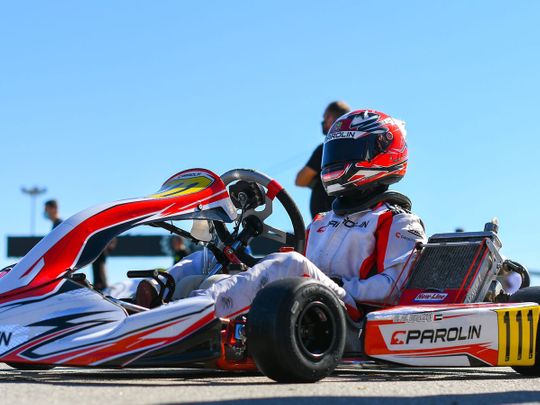 The victory is in the same major competition that Al Dhaheri won in 2019 in the Mini category.

Under the colors of Parolin, Al Dhaheri once again demonstrated his way of winning by taking up the challenge against more than 100 drivers representing more than 50 nationalities from all over the world.

The competition was fierce, as the talents of the OK-Junior category lined up with concentration in this race of the WSK Champions Cup.

The qualifying heats set the stage to demonstrate the young star’s consistency and weighting, giving the UAE star a good start, as he reached pole position to start the pre-final. Throughout this Prefinal, he once again demonstrated concentration and consistency, managing a comfortable lead to start the Final from pole position.

The final opened and Al Dhaheri left. Quickly advancing from those in pursuit, the Emirati star had quickly swerved, standing firmly in front of the pack.

Throughout the race, Al Dhaheri showed great maturity in his driving style. Lap after lap, the number 355 of the young Emirati regularly held the leading position. Building each lap, Al Dhaheri crossed the finish line more than a second faster than those behind.

“There are a lot of great memories on this track especially in the WSK Champions competition so I was delighted to progress in this competition once again to a higher category,” said Al Dhaheri.

“It’s a fantastic result and it’s thanks in large part to the efforts and support of the whole team. The chassis setup was perfect and allowed me to work hard to achieve the best of myself. I would like to thank the whole team for their considerable efforts, ”he added.

Coach and former Formula 2 champion Fausto Ippoliti was pleased with the way the young gun handled the pressure. “It’s a great opening result for the new season and the whole team is very happy for Rashid,” said Ippoliti.

“The good balance and dedication to his training that Rashid has shown throughout this difficult past year has paid off. The whole team has done well and we can be proud to have progressed together in positive efforts with a winning spirit, ”he added.

The World Series Karting Champions Cup race took place on the innovative Adria Karting circuit approved by the FIA. This 1,302m course is challenging with its tight, twisty nature, with straight lines connected by a series of hairpin bends.