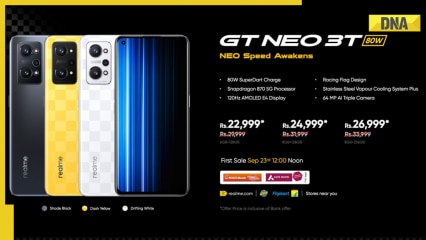 ALSO READ  Can crypto make the world a better place?

Realme GT Neo 3T has a 6.62-inch E4 AMOLED display. The screen gets a 120Hz refresh rate, 1300 nits peak brightness and support for HDR10+ content. Under the hood, the smartphone is powered by a Qualcomm Snapdragon 870 chipset paired with up to 8GB of RAM and 256GB of internal storage.

When it comes to camera, the Realme GT Neo 3T has a triple rear camera with 64 MP primary camera, supported by an 8 MP camera and 2 MP macro lens. For video calls and selfies, the smartphone gets a 16MP front camera.

The Realme GT Neo 3T comes with a Vapor Chamber based cooling. Out of the box it runs on Android 12. The smartphone is backed by a 5,000 mAh battery that supports 80W fast charging.

Cheapest 5G Apple iPhone Available With Up To Rs 7,000 Off In Festive Offer

Scandal star Columbus Short is off the hook after prosecutors drop...

The Bharat Express News - October 1, 2022 0
The Scandal actor Columbus Short is apparently free after charges against him are droppedAfter prosecutors reviewed domestic violence and child endangerment in February, they...

Scandal star Columbus Short is off the hook after prosecutors drop...