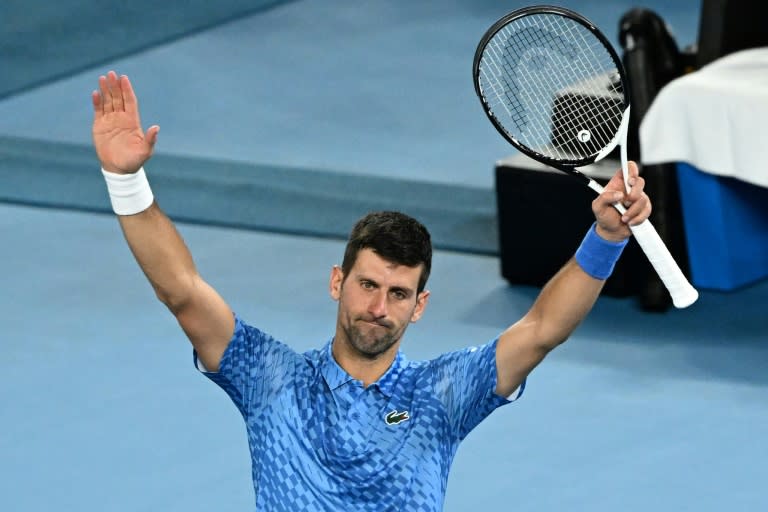 Novak Djokovic ominously reached the quarterfinals of the Australian Open on Monday, while Aryna Sabalenka was an equally ruthless winner.

After a series of shocks at Melbourne Park, normal order was more or less restored on day eight, except for fourth seed Caroline Garcia, who succumbed to the weight of expectation.

Djokovic destroyed Alex de Minaur for losing just five games to move into the last eight and step up his bid for a 10th Melbourne crown, and a record 22nd major title overall.

He will face fifth-seeded Andrey Rublev for a place in the semi-finals after the Russian knocked out Danish teenage talent Holger Rune in a thrilling five-set clash, also at Rod Laver Arena.

The Serb’s 6-2, 6-1, 6-2 victory over 22nd seeded home hope De Minaur was significant, also as his troublesome left hamstring had improved much.

When asked afterwards how he had been so emphatic, Djokovic told the crowd, “Because I wanted to.”

The 35-year-old called it his “best game of the year so far” and a “perfect game”.

And about his hamstring, he added: “I didn’t feel any pain tonight. I moved as well as I did all tournament.

“It means we’re on the right track.”

His next opponent Rublev admitted he was “lucky” after saving two match points against Rune in an energy-consuming heat.

He described the 19-year-old’s beating as “not like a roller coaster, it’s like they put a gun to your head. A roller coaster is easier”.

In a men’s draw decimated by shocks, including reigning champion Rafael Nadal’s exit in the second round, there will be a final eight duel between two unseeded Americans.

Ben Shelton, 20, came off another five-setter against friend and compatriot JJ Wolf on his first trip outside the United States.

Shelton is only the fourth man in the last 20 years to reach the Melbourne quarter-finals on his debut.

“Absolutely a surprise,” said 89th Shelton, who attended the University of Florida a year ago and ranked 569th in the world.

“It was my first time, I’ve never been outside the United States, I knew it was going to be a struggle,” he added.

“So I think maybe it helped me a little bit to not have that expectation or feeling like I have to perform, but just be able to go out there, be myself and play freely.”

In the women’s draw, Garcia became the last top-10 seed to fall, with a shock defeat to World No. 45 Magda Linette.

This is the first Grand Slam since the start of the Open era in 1968 to lose the top two places in both the men’s and women’s draws before the final eight.

Unseeded Pole Linette stunned Garcia 7-6 (7/3), 6-4 and the French player admitted that her expectations and nerves got the better of her.

When asked if it would have been too much to be one of the favorites for the title, she replied: “Yes, I think so.

“It’s one of the things I’m not comfortable with.”

Linette said she “couldn’t believe it” when she reached her first Grand Slam quarterfinal at the age of 30.

She will take on Karolina Pliskova after the former world number one raced past China’s Zhang Shuai 6-0, 6-4.

Sabalenka never really looked like she would trail top seed Iga Swiatek, Garcia and the rest of the first major of the year.

Belarusian and third-seeded American Jessica Pegula – both chasing a first major crown – are now the women to beat.

The hard-hitting Sabalenka sprinted to her first quarterfinal at the Australian Open and said: “It took me a while to understand that negative emotions won’t help you on court.

“You just have to stay strong and believe whatever happens, and then do everything you can.”