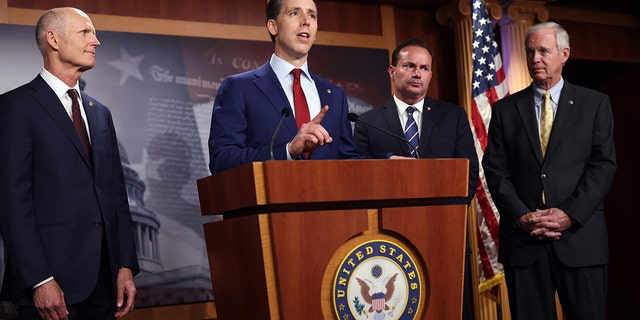 Republicans must change their brand name and “build something new” after failing to regain a majority in the US Senate or meet general expectations for the 2022 midterm elections, one of the party’s younger members said.

“The old party is dead. Time to bury it. Build something new,” Hawley wrote.

The 42-year-old Republican from Missouri is among a younger group of Republicans in the Senate who have expressed reservations about or directly oppose current Republican Senate leader Mitch McConnell, 82.

Hawley was vocally critical of the Republican Party after they failed to win in Pennsylvania, where Republican Dr. Mehmet Oz failed to defeat elected Senator John Fetterman, and in Arizona, where Sen. Mark Kelly fended off Republican hopeful Blake Masters.

“You can’t expect independent voters to vote Republican unless you give them an agenda they care about,” Hawley added in a tweet on Friday.

The day before, Hawley said the Republican machine “lost a lot” in the midterm elections and said their legislative priorities were not supported by the American people.

“Republicanism in Washington lost a lot on Tuesday night. When your ‘agenda’ gets close to Big Pharma on insulin, to Schumer on gun control and Green New Deal (“infrastructure”), and teases changes in Social Security and Medicare , you lose,” he wrote.

He also suggested that the Republicans did not present their own ideas and initiatives to the voters and only pointed to the failure of the Democratic Party.

“Not enough to say the other side is not good. Must provide a real agenda,” he wrote.

Hawley was also among a group of Republicans, along with Sen. Marco Rubio, Ted Cruz, Rick Scott and Cynthia Lummis, who urged the Senate to postpone his presidential election until after the second round in Georgia with Republican Hershall Walker and Democrat Raphael. warnock.

“Senate vote for GOP leadership next week should be postponed,” Rubio tweeted.

Senate Leader Mitch McConnell, a Republican from Kentucky, walks to the Senate floor at the US Capitol in Washington.
(Eric Lee/Bloomberg via Getty Images)

He added: “First, we must ensure that those who want to lead us are genuinely committed to fighting for the priorities and values ​​of the working Americans (of all backgrounds) who have brought us great victories in states like Florida.”

“Exactly. I don’t know why the Senate GOP would hold a leadership vote for the next Congress before these elections are over. We have a runoff in #GASenate – do they say it doesn’t matter? He wrote.

Despite calls for a postponement, a Senate GOP official confirmed to TBEN News Digital that the leadership election will go ahead as planned.