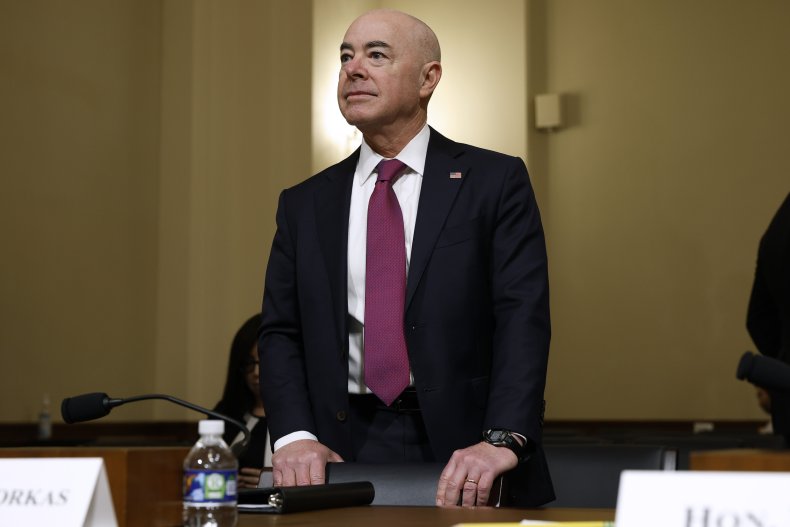 Several Republican members of the House Committee on Homeland Security appeared to be calling Tuesday for President Joe Biden’s DHS secretary to resign ahead of Republican priorities if they took control of the House in January.

During a hearing on Tuesday designed to investigate international and domestic terrorism incidents, cyber threats and election security, several Republican members of the committee bombarded DHS Secretary Alejandro Mayorkas with questions more focused on issues on the United States’ southern border with Mexico and numerous theories of federal law. enforcers using their power to spy on Americans sympathetic to former President Donald Trump.

When questioned by Louisiana Representative Clay Higgins — who has previously expressed interest in chairing the committee next Congress — a seemingly stunned Mayorkas repeatedly replied that he didn’t know what Higgins was talking about, particularly in response to questions about suppressing evidence presented by border patrol agents. or that Mayorkas wanted revenge on DHS and Border Patrol agents who Higgins claimed were conservative.

“Congressman, I don’t even know what you’re talking about,” Mayorkas said in response to a question from Higgins.

“You will,” Higgins replied, referring to a number of investigations Republicans are about to launch when they take control of the House in 2023.

But the line of questioning appeared to presage future Republican efforts to oust Mayorkas, as conservatives appear poised to make him the party’s main target in a conservative-majority Congress next year.

Higgins – who later revived a much-discussed conspiracy theory during the hearing by asking FBI Director Christopher Wray about whether FBI agents were the instigators of the January 6 riots at the U.S. Capitol — also asked Mayorkas to comment on apparent rumors that he planned to resign before Jan. 3, an idea Mayorkas said was “a false rumor” after days of speculation about his future at the agency.

The pressure seems to be building up against him already.

Tuesday’s hearing comes just days after US Customs and Border Protection Commissioner Chris Magnus announced it The Washington Post he had rejected a request for resignation from Mayorkas in recent days after a public rift erupted between the two DHS officials over the situation on the southern border.

Meanwhile, CNN reported in October that numerous Republicans in Congress have already suggested they are likely to initiate impeachment proceedings against him over his agency’s handling of the border crisis.

Topics raised by Republicans to Mayorkas on Tuesday included the continued influx of undocumented migrants at the U.S. border with Mexico, an increasing number of terrorist-listed migrants attempting to cross, and the growing prevalence of cartel-supplied illicit drugs such as fentanyl — the majority of which Mayorkas said on Tuesday comes largely through gateways.

While impeachment has been floated regularly, others hope he goes quietly.

One of the strongest voices pushing for his resignation at the hearing was Republican Jake LaTurner of Kansas, who repeatedly interrupted Mayorkas’s explanation of the DHS policy with questions about various shortcomings of the Biden administration’s border policies.

After several questions, LaTurner — an early supporter of former President Donald Trump’s border wall — asked Mayorkas if he had spoken to anyone in the administration about stepping down from his current role in government.

“I hope for the safety of the American people that there will be a conversation soon,” LaTurner said responded.