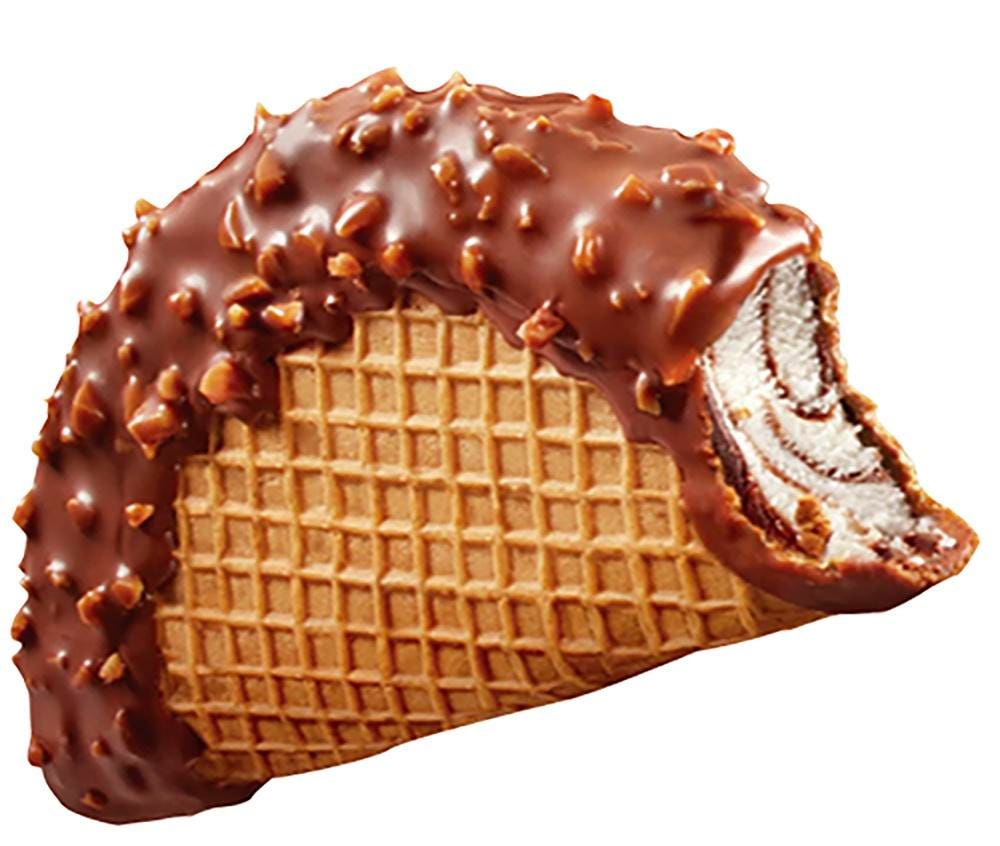 Nostalgic woes flooded the internet this week, when Klondike announced that the Choco Taco had been discontinued. Since its debut in 1983, the portable ice cream treat has been loved by generations, using a taco shell-shaped cone to store ice cream covered in hard chocolate. But apparently enthusiasm didn’t equal sales (and no, that cultural appropriation claim isn’t true), and the taco-style dessert is officially dead. Well almost.

Ice cream trucks, grocery stores, and even some restaurants still have solid stocks of their latest shipment of Choco Tacos. In New York, Black Tap offers the Choco Taco on top of their cinnamon churro crazy shake, which costs $17. Stock is limited, but is estimated to last about six weeks, a representative of the local restaurant chain said. New York BBQ spot Pig Beach also still sells Choco Tacos and puts a countdown on Instagram to share how many they have left.

Other restaurants are getting innovative and making their own chocolate-dipped ice cream taco creations to meet the demand, and maybe take advantage of the new gap in the market.

In Los Angeles, the Studio City restaurant Oy Bar offers their own choco taco creation. “We heard the terrible news about the #ChocoTaco and had to do something about it,” the oyster bar posted on Instagram. “So we’re going to put our spin on it in the coming weeks. From tomorrow come and mourn and toast to the best liquor store ice cream truck munchies drokies after school hot summer day dessert. 🍫🌮” And in Smorgasburg LA, Sad Girl Creamery offers a Strawberry Shortcake Taco and a The Che Taco made with Argentine dulce de leche ice cream, plus a brown butter Mexican vanilla waffle cone and a dark chocolate bowl.

In Atlanta, two local businesses are also teaming up for their own frozen taco. Mexican restaurant Poco Loco and ice cream parlor Butter and Cream created 100 Loco Cocoa Tacos, which will be released this week in batches of 30-35 a day. Tucson’s Monsoon Chocolate also offers its own gourmet frozen treat, made with sweet corn custard in a waffle taco shell, topped with toasted pecans, Maldon salt, and corn powder.

And in Allentown, Pennsylvania, The Udder Bar offers a $5 customizable ice cream taco, which can fill a homemade waffle bowl with two scoops of ice cream (dozens of flavors available), plus toppings and sauces.

In October, Salt & Straw will offer a limited-edition Chocolate Tacolate, featuring a handmade waffle cone taco shell, filled with cinnamon ancho ice cream, dipped in single-origin chocolate and sprinkled with flaky salt. Locations across the country, including the brand’s birthplace in Portland, OR, plus Los Angeles, San Diego, Miami, Seattle and the Bay Area all offer the special.

The original Choco Taco may be gone, but mourning its loss with one of these innovative and possibly more delicious options may be just what you need.