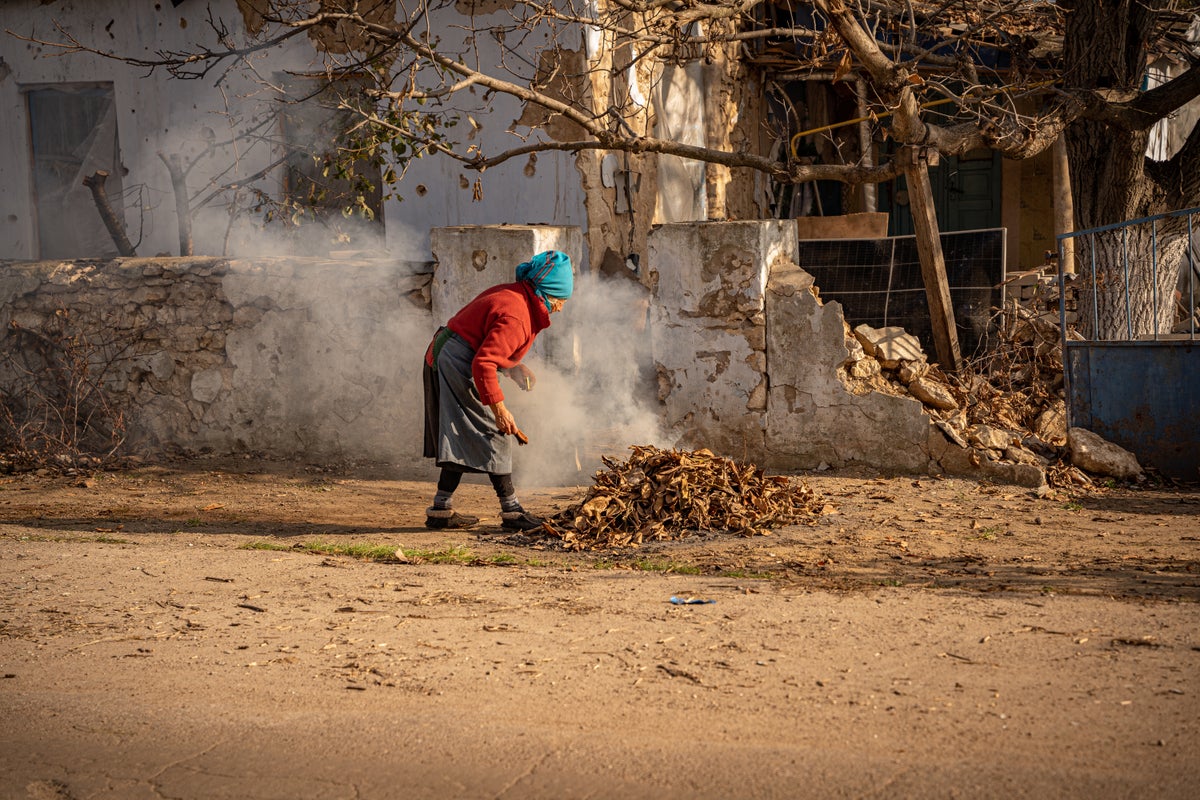 Eevery day is like ‘Armageddon,’ says Serhiy who, along with a local soldier patrolling the frontline village, makes an effort to shelter from the sharp bang of incoming fire.

There is a tense pause before another louder explosion rips through the air behind them. Squatting next to a partially destroyed post office, the two men begin to calculate the distance and direction of the fire.

This is the desolate village of Novo-Oleksandriva in the southern Kherson oblast. It is located on the western bank of the Dnipro River, which cuts this region in two. It is being shelled by Russian troops just a few miles away on the other side of the water.

Most of the once sleepy towns and hamlets in this area are also under attack from Russian positions about 20 miles to the south. There, another frontline rages around the occupied regional capital — a battle fought so hard by the Ukrainians that the Russians have announced a major withdrawal.

But in Novo-Oleksandria, which has no access to water or electricity, it is premature to celebrate a retreat. The heavy thud of shelling reverberates through the air and the gray ground.

“There used to be 1,000 people living in this village, and now there are a few hundred left,” said Serhiy, explaining how the city stumbled through a brutal seven-month occupation and even a “referendum” by the Russians.

“Every day there are shelling, mortars, artillery, drones. We had seven hits this morning. It’s only getting worse.”

The southern Kherson Oblast is pockmarked by the remains of once occupied and now destroyed Ukrainian towns and villages: the scars of some of the war’s fiercest fighting.

That’s because of how strategically important this region is to President Putin and his invasion of the country launched in February.

It was one of the first targets of the Moscow men as they rolled through the Ukrainian countryside, swallowing up towns in neighboring Zaporzhizia Oblast, before heading west to Kherson.

The regional capital of Kherson – located on the West Bank of the Dnipro, about 50 km south of Novo-Oleksandrivka – was one of the valuable achievements of the ongoing offensive and the last remaining regional centers that were captured during this war in the hands of the Kremlin. had were taken.

But on Wednesday, despite ongoing attacks on Ukraine, Russian Defense Minister Sergei Shoigu ordered his troops to withdraw from the city of Kherson and any positions they occupy on the western bank of the Dnipro River.

It was a potentially devastating and embarrassing setback for the Kremlin, which has already been forced to withdraw from the Kiev and Kharkiv area in the northeast.

The televised announcement of the withdrawal – the culmination of weeks of well-publicized “evacuations” from the city – was met with skeptical caution by Ukrainian politicians and soldiers.

They said TBEN that although they believed the Russians had to withdraw from the West Bank of the Dnipro, as their supply lines were cut, Russian troops were still stationed in the city with additional reserves waiting in the region to lay some sort of ambush.

Mykhailo Podolyak, a senior adviser to Ukrainian President Volodymyr Zelensky, said: TBEN that, until Ukrainian flags are hosted over administrative buildings in the city of Kherson, anything said by Russia is “an information trap.”

He later warned on Twitter that Russia would turn Kherson into a “city of death” by ridding its streets with landmines and shelling it from positions they still occupy on the eastern banks of the river.

And so soldiers patrolling the recently liberated towns in Kherson say they expect the shelling over places like Novo-Oleksandrivka to intensify as Russia ramps up its attacks on Ukrainian positions as it tries to set up ambushes.

“It’s military tricks. Expect hard shelling,” said a soldier in a liberated city, who could not be identified because he is not authorized to speak to the media.

Citizens in the area agree.

In Arkhanhel’s’ke, a village west of Novo-Oleksandrivka, about 15 km from Russian positions in southern Kherson, civilians are left without water, electricity or gas. Stranded by shell-carved buildings, residents describe torture, kidnapping and murder during a seven-month occupation and then life clinging to one of the fiercest front lines.

Valentin, 57, who was riding a bicycle to collect humanitarian aid, says his cousin was held and tortured in a basement under a central block of flats requisitioned by the Russians. They suspected him of helping the Ukrainian army as he tried to climb a hill to get a mobile network to check in with his family.

“They suspected anyone who went there and would take them for questioning,” Valentin added.

“They beat people and even used chisels under people’s nails.”

Mykola, 60, a railway worker, whose son is currently detained in the town of Kherson, says two family friends in the village, a man and a woman – Valentin, 56, and Larissa, 50 – were found dead in the basement of their home. Larissa was probably raped before she was murdered, he adds grimly.

Echoing others in the city, Mykola says, living under the brutality of Russian soldiers and knowing how important Kherson was to their invasion, felt it was “too early to celebrate” or rely on news of a withdrawal from the regional capital. .

“Until there is official news that Kherson has been liberated and we see Ukrainian troops in the city, we will not welcome this news,” he added.

Like others in the wider Kherson Oblast, his 33-year-old son and his grandchildren are trapped in the city of Kherson. His son – whom he would not name for security reasons – tried to evacuate three times to Ukrainian-occupied territory, but was shot at by Russian snipers and eventually gave up.

Mykola says that from the short phone calls he was able to make with his son, the situation in the regional capital has become increasingly bleak.

“He told me there is no electricity, no water, that half of the city’s infrastructure is gone and they don’t have good internet,” he continues.

There are reports that Russian flags have been removed from the city’s administrative buildings, and there were few signs of Russian military personnel entering the apartments of evacuated residents before. But Mykola says his son wasn’t sure there was a full withdrawal.

Meanwhile, civilians like his son are under pressure to evacuate to Russian-occupied territory, including Crimea. But there, his son says, they force Ukrainian citizens into Russian passports and take men of combative age with them.

“That’s why he stayed in Kherson,” Mykola adds with a desperate shrug.

“I am very concerned about him. I hope that maybe they will organize a green gang to get him out. But that is all I can hope for until the full liberation actually takes place.”

This ties in with other reports TBEN has heard from residents still in Russian-occupied Kherson. In a settlement east of the city of Kherson, a man spoke to TBEN through an encrypted app. We’ve protected his identity for his safety.

He says Ukrainians were forced to accept Russian passports because social support for those expelled from other parts of the country and the right to buy real estate was granted only to Russian passport holders.

“Meanwhile, there are no jobs, everything just stopped, prices are high,” he adds.

Back in Novo-Oleksandriva, residents used the breaks between the blasts of the shelling to try to arrange the delivery of water via fire trucks. For them, the coming winter is their main concern.

Oleksandr, 61, and Andrei, 44 two mechanics, say without water or electricity, this winter is going to be potentially lethal.

“It’s not better not to think about the fighting or any news of withdrawal,” Oleksander said. “We need to focus on surviving this winter.”