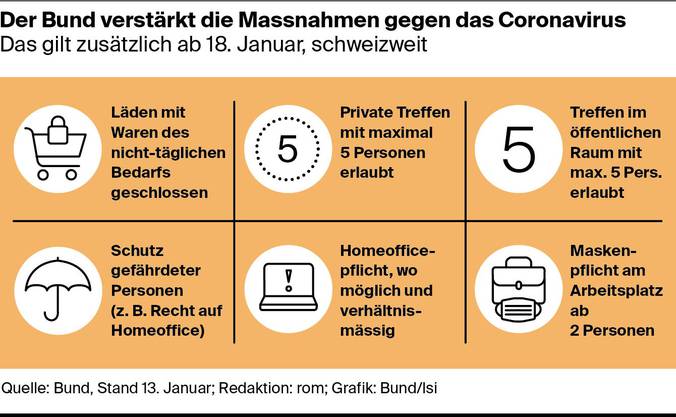 1. The number of cases has recently declined slightly. Why is the Federal Council acting anyway?

On the one hand, the number of new infections is still too high in the eyes of the Federal Council and the trend is not clear. On the other hand – and this is much more important – he is very concerned about the spread of the two new viral mutations.

The Minister of Health, Alain Berset, spoke of the bad news that the Federal Council received on the day of the decision. Thus, mutations, 50 to 70% more contagious, spread rapidly in Switzerland. Existing measures threaten to double the number of cases every week, Berset said.

ALSO READ  Because of the storm on the Capitol: Swiss travelers should avoid the demos

2. Why does the Federal Council not wait to see how the situation will develop in the coming weeks?

The government has done this on several occasions in the past. But this time, she came to the conclusion that it was not an option – an expression of the dangerousness of the situation for the Federal Council. He now acts instead of reacting. Berset said the spread of the most contagious mutation is a “game changer” and action must now be taken to prevent the worst: an explosion in the number of cases, like that seen in Britain and Ireland.

Berset pointed out that Switzerland was a few weeks ahead because it was at the same point as Britain in early December. Therefore, it is now important to intervene and avoid a third wave.

3. What has been decided now?

The main objective of the Federal Council is to minimize contact and contagion. People should meet as little as possible. Therefore, not only previous measures such as the closure of restaurants and fitness centers will be extended until the end of February. Stores will be closed from Monday, January 18, except for necessary merchandise.

Only five people are allowed to meet – privately and in public spaces, including children. This means: family reunions are prohibited. This also applies to Sunday walking. People should work from home if possible. If more than one person is in an office, a mask is necessary even if the distance is sufficient.

4. Has the Federal Council exhausted its room for maneuver?

No. “It’s not a hard lockdown,” Federal Councilor Berset said. Act pragmatically and take just one step forward. The Federal Council could definitively decide on a further tightening. Specifically, hotels and ski slopes are currently not closed.

5. Why does the Federal Council not intervene in schools?

Schools are the responsibility of the cantons. You have to decide what applies. There are still obstacles to closing schools and moving to distance education. It is said that not only children from poorly educated families would lose. Health Minister Alain Berset said that we saw in French-speaking Switzerland in the fall that the number of infections could be reduced even without the closure of schools.

If so, there must be face-to-face online lessons, Zurich government adviser Ernst Stocker, representing the cantons, told the media yesterday. Discussions are currently underway at the Conference of Directors of Education and the Federal Council has asked them to comment. The Minister of Health said:

In general, however, it must be said: with this highly contagious viral mutation, the situation has changed.

We must ask ourselves the question of school closures. The Federal Council will respond in the coming days, according to the Conference of Directors of Education.

6. The Federal Council is closing a lot – is it also helping more?

Yes. Aid was long overdue, especially in the catering sector. Now the Federal Council has announced how it intends to compensate companies. To this end, it adapts the regulation of the difficulties.

There are fundraising contributions for businesses. In addition, all businesses that have to be closed for 40 days or more are eligible for assistance. This means that closed businesses are automatically cases of difficulty. However, money will not arrive at the same speed everywhere. Some cantons still have to adapt their laws.

7. If the situation is so dangerous: why do the measures only apply from Monday?

Federal Councilor Berset noted that things were going “quite quickly”. But we have to give people time to organize themselves. According to the Federal Council, Switzerland has this time because the number of cases of the mutated virus is currently still at a low level.

8. How are the decisions of the Federal Council received?

The government has received praise, but also harsh criticism. The closure of non-food stores has been a blow to retail, the Swiss Retail Federation said. The economic umbrella organization Economiesuisse was also skeptical about the tightening.

Among the parties, the PS, the CVP, the Greens and the GLP were generally satisfied with the Federal Council’s decision: the restrictions were unfortunately necessary, so the tenor. In its announcement, the FDP did not comment on the tightening, but instead focused on the vaccination campaign, which is progressing too slowly. Individual representatives of the FDP were critical: “Unfortunately, another difficult lockdown has been decided, the effect of which in neighboring countries is more than questionable,” tweeted National Councilor Christian Wasserfallen.

Unfortunately that was another difficult #Confinement decided whose effect in neighboring countries is more than questionable. 🤔
We now have more than 100,000 cases of hardship and threatened lives. Tens of thousands of people are sent out of work. The federal government must provide financial assistance quickly!

Severe criticism came from the SVP: instead of protecting groups at risk, the Federal Council “harassed” the majority of the population. The party demanded that all the measures decreed yesterday be canceled – failing which Parliament would have to correct the decisions of the Federal Council in an extraordinary session.

Today’s BR decision leads to mass unemployment; the BR is pushing Switzerland into poverty! WAK’s desire not to tighten it up has been ignored. The SVP parliamentary group calls for an extraordinary session so that the parliament can decide again!

Interestingly, Guy Parmelin and Ueli Maurer, two SVP federal councilors, appeared before the media yesterday. As Parmelin and Federal Councilor SP Berset repeatedly came forward, Maurer had to briefly shake off some frustration towards the end of the press conference, as he said himself.

We must not lose sight of the big picture, he warned: the financial consequences would occupy Switzerland for another ten or twenty years. Maurer expects the mountain of debt to grow at a similar rate in 2021 and 2020.

9. When is it finally over?

The measures initially apply until February 28. Berset and Parmelin assured them that the goal was to keep the period of restrictions as short as possible. “But it seems very unrealistic to me that we can relax before the end of February,” Berset said. It is also conceivable that the measures will have to be extended again.

The Federal Council is aware that the restrictions are severe, he stressed: “For months, we have all been asked a lot. Corona fatigue increases. “Spring is the bright spot: the Federal Council hopes that the situation will improve thanks to the measures taken, vaccinations and the end of the cold season.

Chaos numbers for vaccinations: federal government can only give an estimate

Why, of all the people, does Jakob Stark become a member of the Axpo board of directors?

After the corona epidemic: mask obligatory for pupils in grades 4 to 6 also in schools in Zurich – according to expert