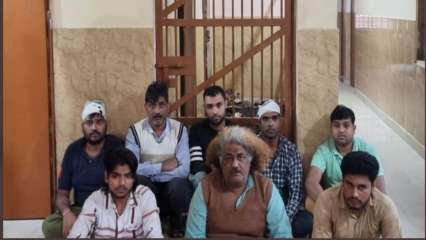 Just hours after a scuffle between “chaat vendors” in Uttar Pradesh’s Bagpath went viral on social media, leaving 12 injured and eight in custody, the man at the center of the events revealed this that really happened that day.

Herendra, affectionately referred to as Chacha, said he was ‘undeniably pissed off’ because a rival ‘chaat’ seller was telling people he was selling expired food items. “I will not tolerate anything, but not if criticism is thrown at the company. I have been here for years and people travel long distances for ‘Uncle ji ki chaat’,” he said. by IANS.

“They kept attracting my customers… they kept telling them to come to our store, their food is last night’s food… Customers would give me back my chaat,” Harendra said. according to ANI.

“They did it four or five times.” He made these remarks before his arrest.

#LOOK Baghpat: A clash breaks out between two groups of “chaat” traders over the question of attracting customers to their respective stores in Baraut. Police said, “Eight people have been arrested, action is being taken. There is no law enforcement situation there.”

Clips in the video that left netizens in a tizzy showed a plump man with frizzy red hair who is seen in the fight giving him as much as he got – a kick for a kick and blow for blow. The two groups, armed with bars and iron sticks, fought brutally on the road.

ALSO READ  UP: 10 killed, several injured in a bus-truck collision on the Moradabad-Agra highway, courtesy CM

Video clips of the brawl in Baraut which went viral on the social media show The ‘chaat’ brawl ended at the police station where the warring groups sat next door without showing any sign of hostility which was evident earlier.

The bizarre fight continued for about 20 minutes before being stopped. Video recording of the incident then went viral on social media.