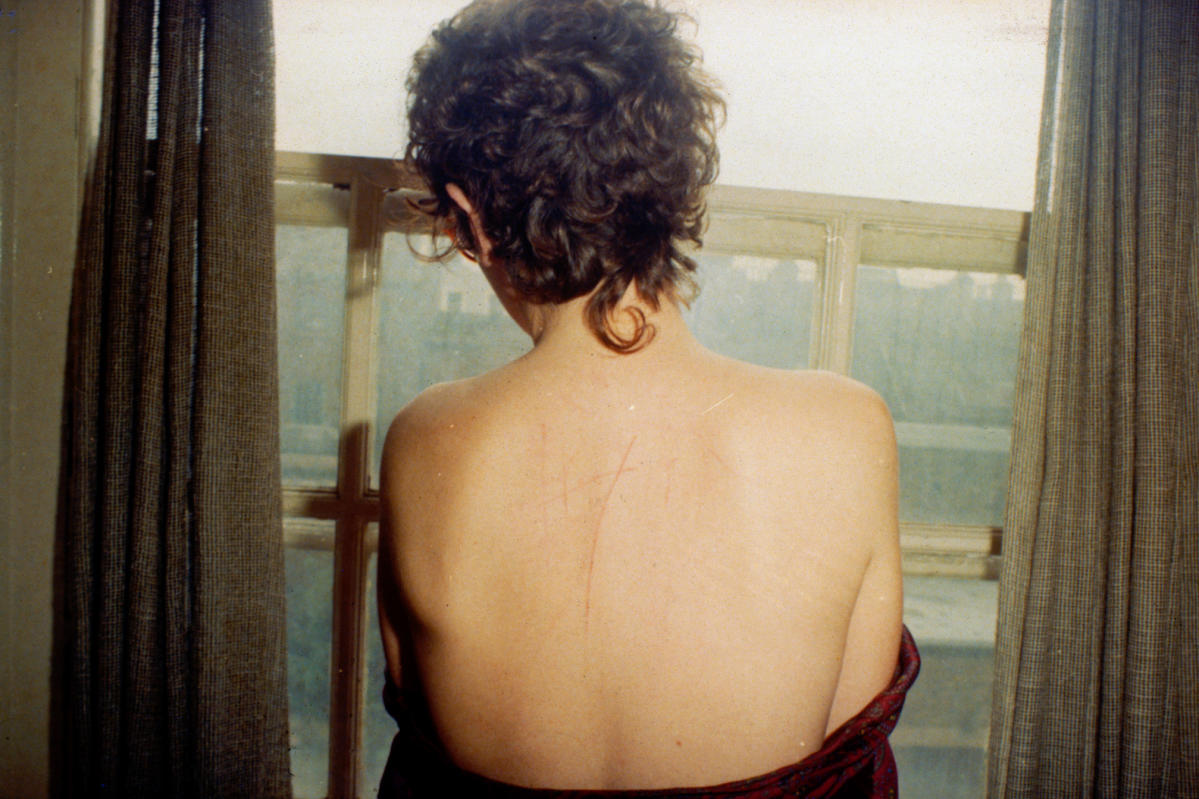 Nan Goldin, the subject of Laura Poitras’ film festival winning documentary “All the Beauty and the Bloodshed” by Laura Poitras, is a name you probably know well or not at all. She is undeniably famous in the art world. Her photographs of inner-city life in the late 1970s and 1980s and the vivacious, glamorous bohemians she encountered on the scene, such as John Waters It-Girl Cookie Mueller, have been exhibited at Whitney, Tate, and MoMA.

If you look at one of the photos in her most well-known work, the ever-evolving slideshow “The Ballad of Sexual Dependency,” you can see how influential she was on generations to come with her raucous, public-private snaps of parties that never stopped until dawn, beautiful “queens” and even her face, a month after a “dopesick” friend beat her so hard that she almost lost her eye. The New York Times review of a collection of those photographs at the time stated that “The Ballad” was to the 1980s what Robert Frank’s “The Americans” was to the 1950s. And it would become a devastating document of many of the young lives lost during the AIDS epidemic.

This is just part of Goldin’s story, as you’ll learn in “All the Beauty and the Bloodshed,” which opens in theaters this week in New York before expanding to more markets in the coming weeks. Poitras, the Oscar-winning filmmaker behind “Citizenfour,” began filming Goldin to document her protest efforts against museums that accept money from the Sackler family. Their company, Purdue Pharma, developed and marketed the widely prescribed and widely abused painkiller OxyContin, which has been linked to more than 500,000 deaths in the US over the past two decades.

ALSO READ  Kevin De León refuses to resign. What happens to his constituents?

Goldin found herself addicted to opioids prescribed for surgery several years ago and took them as instructed. But, she said, she became addicted overnight. When she came out of treatment, she started reading about Purdue and the Sacklers, a name she associated with museums and philanthropy. Sackler Foundations have donated many millions of dollars to some of the world’s most prestigious museums and universities, from the Guggenheim to Oxford. And her mission became clear: to use her status in the art world to stop museums from accepting money from the Sacklers, remove their names from galleries, and change the way we think about addiction and treatment. And thanks in part to her efforts, many museums, from the Louvre to the Met, have moved away from the Sacklers.

ALSO READ  Joanna Gaines Lied About Her Middle Name Growing Up Being Bullied: 'I Couldn't Find My Place'

Poitras cleverly saw that there was a very clear line between what Goldin did in the ’80s, when she came out of rehab and watched all her friends die of AIDS, and what she did now. The documentary weaves these threads into a holistic portrait of an artist’s battle cry.

While the Sackler protests are the hook, the strongest parts of the movie are the historical ones. Poitras artfully overlays Goldin’s gut-wrenching eloquence with her photographs and a camera shutter soundtrack. Goldin recounts everything from her stifling suburban childhood to the ripple effect of her older sister Barbara’s teenage institution to her death by suicide at age 18 that sent Nan and then Nancy Goldin bouncing between foster homes. It wasn’t until she found a camera that she found her voice and her real family (her friends).

There are some particularly devastating family achievements that Poitras and Goldin save for last. It’s trite to call that an origin story, but with Goldin, everything stemmed from those confusing days. She had been told early on never to let the neighbors know about their problems. However, sweeping it under the rug, not talking about it and not dealing with it would destroy them.

Goldin may not have known it when she started photographing her LGBTQ friends, but her work has always been about looking at society’s so-called fringe cultures, about showing the issues that the masses prefer to just ignore and make them so urgent that you can’t look away anymore. It is an act of hope in the idea that things can be better because the alternative, the silence, is infinitely worse. Goldin would know.

As Goldin says at the beginning, “It’s easy to make a story out of your life. But it’s harder to hold on to real memories.”

“The real memories are what hit me right now,” she continued. “Even if you don’t really let go of the memories, the effect is there, it’s in your body.”

“All the Beauty and the Bloodshed”, a limited edition NEON release now expanding, has not been reviewed by the Motion Picture Association. Running time: 117 minutes. Three and a half stars out of four.