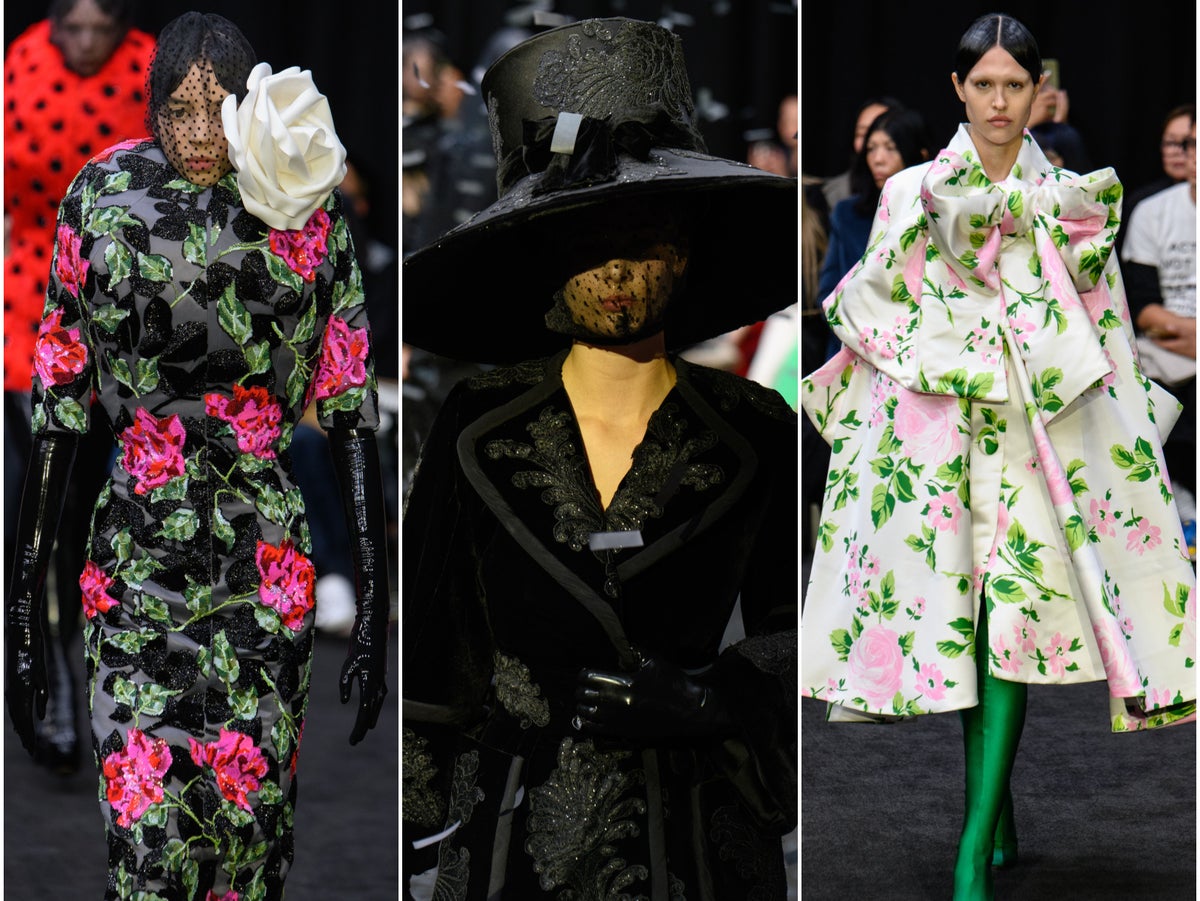 AAfter a day-long hiatus for Queen Elizabeth II’s state funeral, London Fashion Week closed on September 20 with shows from stalwart Emilia Wickstead and highly-tipped newcomer Chet Lo. However, the expected event of the day was a Richard Quinn final.

The Peckham-based designer had a special bond with Her Majesty, as his LFW show was the only one she attended during her 70-year reign. In 2018, she presented Quinn with the inaugural QEII Award for British Design. A thoughtful tribute at his Spring/Summer 2023 show was to be expected.

A drink in the Royal Horticultural Hall formed an appropriately theatrical setting. Those in attendance were welcomed through a room draped in monochromatic fabric – which ran from the ceiling to the floor – featuring Quinn’s signature floral print. Entering the great hall, celebrity guests including Jourdan Dunn, Sharon Horgan and fellow designer Henry Holland were confronted by a massive installation: TV screens surrounded by trailing wires and flashing surveillance cameras nodding to Quinn’s “exquisite futurism” theme. .

But first a look at the past. An emotional soundtrack, courtesy of The Mortal Coil’s “Song To The Siren,” broke out as archive footage of the Queen’s coronation was played on screens. Then a gloomy procession of models in all-black outfits – covered in veils or crystal-adorned crowns – made their way across the room. A tribute from Quinn to the late Queen, “who touched him among so many others with her grace and kindness”. These were beautiful ensembles made of intricate beaded lace and jacquard velvet, occasionally adorned with oversized rose corsages. Some silhouettes were reminiscent of Her Majesty’s reign looks, such as the incorporation of circle skirts or a dress coat with a belt at the waist.

As the subdued music gave way to a heavier beat, the futuristic looks we were promised arrived in a bright palette of violet, scarlet, mustard and emerald. Hard shell bodysuits, which formed a heart shape around the model’s neck, showed off the couture craftsmanship Quinn is known for—some worn with latex leggings, others as part of wide-leg jumpsuits or midi dresses.

Quinn played not only with volume, but also with texture: dainty crystal flowers, ostrich plumes and giant embroidered roses all sparkled under the light of the Big Brother-esque centerpiece. More flowing looks followed suit: an oversized cape with a rose corsage, opera capes with a graphic floral print and more jumpsuits, one of which was worn by the striking fashion queen of Drag Race UK, Tayce.

As usual, the final look of the show was a bridal look. This season it was a modest lace with a headpiece and a veil on top. For added drama, it was preceded by a pair of bridesmaids in bejeweled rose capes. As the looks made their second round of the room, the models were doused in black confetti and the guests erupted into applause. It was a triumphant end to London’s shows for another season, and a fitting tribute to Queen Elizabeth II, from a designer she clearly admired.

Mahsa Amini ‘did not die from blows to head and limbs’, Iranian coroner says