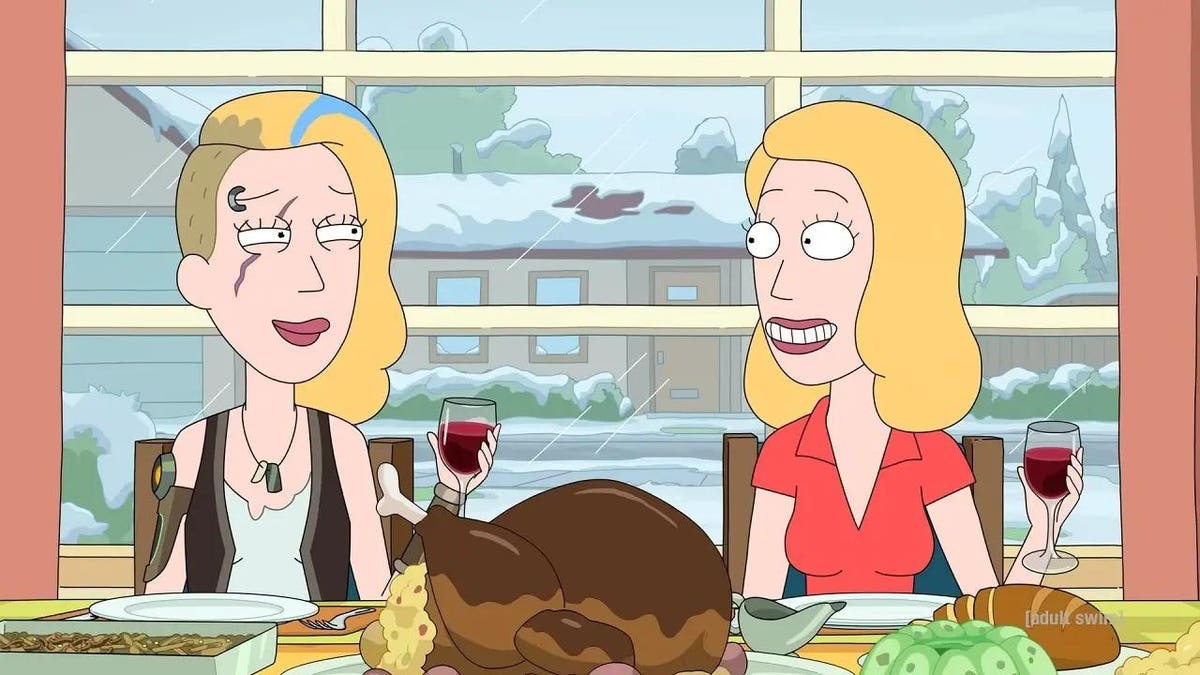 It’s Thanksgiving at Smith’s household and luckily we can skip Rick’s turkey accident and go straight to an awkward family dinner.

Space Beth has come to visit and notices that in the suburbs, her self is still chained to Jerry, who proudly declares that he would kill himself if Beth ever left him. Eager to get away from their annoying, loving husband, the two Beths spend some time alone, comparing their similarities and differences, becoming more and more intimate, until the inevitable happens.

The joke is that “realism” in this context means dullness, and it’s an apt satire of high-budget video games that let players explore a map the size of a small country and craft every damn weapon by hand (the sight of Cloud from Final Fantasy 7 struggling to even lift his Buster Sword, let alone land a hit, was hilarious).

Not sure what to think of her unusual affair, Beth turns to the only man who could understand the situation; because of course Rick has had sex with one of his duplicates, probably a few times. At this point, the man has indulged in every act of hedonism imaginable, and he gives Beth some strangely well-adjusted advice – have fun without getting carried away.

But Beth isn’t sure if she just craves her own image, or is actually in love with her liberated self. So she does a “San Junipero” and lives a lifetime in virtual reality with Space Beth, blissfully entering their twilight years together.

Until Rick ruins the party and ends the simulation, while Summer and Morty demand that Jerry reveal their little secret. Space Beth typically reacts with hostility and the family decides to back off, until Space Beth, ironically, makes the secret public, hoping to humiliate Jerry.

Jerry responds by curling up in a pillbug ball, an amusingly unexpected move Rick had a hand in. For once, Rick seems to have done something nice for Jerry, allowing him to withdraw from emotionally intense situations whenever he wants.

Something about the fragility of Jerry’s pill bug form seems to trigger some sort of maternal instinct in Beth, and she decides she wants to stay with him and live life in the suburbs. The “San Junipero” fantasy was fun, but ultimately just a fantasy. Space Beth is quite taken aback by her rejection, and the two decide they just don’t want to deal with the messy, emotional realities of their affair; they’d rather Rick erase their memories.

Jerry unrolls to stop them, and the three have a serious conversation about how to proceed, leading to the episode’s most hilarious scene, where the conversation turns unexpectedly sexual, and the rest of the family hears their exploits through the newspaper- thin walls of the house – no amount of realistic video game time will let the kids forget.

Now that the tension has subsided, Space Beth flies off again, reminding Summer and Morty that they accidentally created an incest baby, Naruto, who is still floating somewhere in space – the Smiths’ sexual history continues to get more complicated and gross.

Unlike previous episodes that push a gross joke too far (like the sex dragons and giant sperm adventures), “Bethic Twinstinct” had just the right amount of cringe and was pretty thoughtful about the whole thing.

The episode was packed with callbacks, building on Rick and Morty lore without leaning too heavily on it – the post-credits scene even sees Jerry revisit the Jerryboree, hoping to conduct his own “self-love” experiments. Amusingly enough, he settles for a quick kiss with another Jerry – that’s more than enough for him.

If you enjoyed reading, check out my summary of the previous episode here