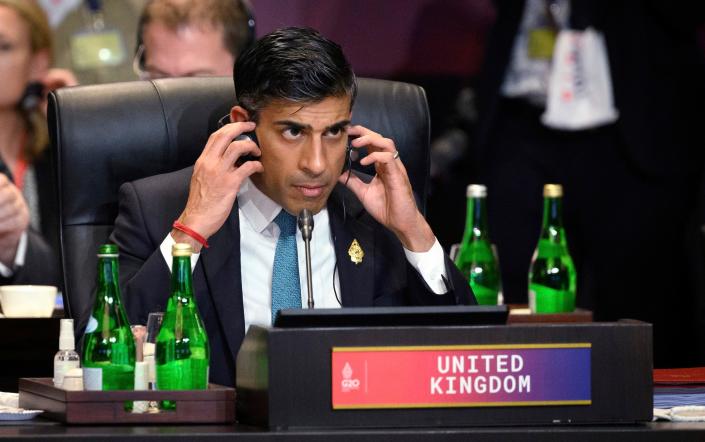 During the opening session in Bali, the prime minister urged Russian troops to “get out of Ukraine” and said the UK will assist Kiev “while it takes”.

Mr Sunak also pointed to the Kremlin’s “armamentation” of energy and food exports, which he called “totally unacceptable”.

A photo of the meeting posted online by Number 10 shows Mr Sunak staring at Mr Lavrov, who is attending the meeting in Mr Putin’s place.

Mr Sunak said of Ukraine: “One man has the power to change all this. It is striking that Putin felt unable to be there. If he had, maybe we could get on with figuring things out.

“Because the biggest difference anyone can make is for Russia to get out of Ukraine and end this barbaric war. That would be transformative for Ukraine, but for the world.

“The UK rejects this aggression. We will support Ukraine as long as it takes and support peace based on the UN Charter.

“And we will work constructively with the rest of the G20 to maintain international order, because that is our collective responsibility.”

The meeting was also addressed via video by Volodymyr Zelensky, the Ukrainian president, who said it was now time to end Russia’s “destructive” war.

“I am convinced that now is the time when Russia’s destructive war must and can be stopped,” Zelensky said, according to a speech obtained by TBEN. “It will save thousands of lives.”

Zelensky wore an army green T-shirt and spoke in Ukrainian. He addressed leaders including China’s Xi Jinping and US President Joe Biden.

Mr. Zelensky criticized “the idiotic threats of nuclear weapons resorted to by Russian officials”. He also thanked the “G19” for their support and left Russia out.

Joko Widodo, the Indonesian president, also used his opening message as the top world leaders began urging an end to the war in Ukraine.

Mr Widodo said: “Being responsible means not creating zero-sum situations, being responsible here also means ending the war. If the war does not stop, it will be difficult for the world to move forward.”

Mr Sunak, who has been prime minister for only three weeks, took aim at the Kremlin during the first plenary session of the G20 world summit.

Mr Sunak said: “Russia’s illegal invasion of Ukraine has profound consequences for all of us, as it has undermined the fundamental principles of sovereignty and territorial integrity.

“We all depend on these principles. They are the foundations of the international order. They must be maintained.

“It is very simple: countries cannot invade their neighbours, they cannot attack civilian infrastructure and civilian populations, and they cannot threaten nuclear escalation.

“Surely these are things we can all agree on.”

He also called for the so-called “Black Sea Grain Initiative,” an agreement with Russia that ensures grain from Ukraine is safely exported despite the war, to restart after it collapses.

“It harms the most vulnerable people around the world. And this has nothing to do with sanctions.”

Yili’s premium brand SATINE responds to COP15’s call to build a shared future for all life on Earth with its continued commitment to preserving...