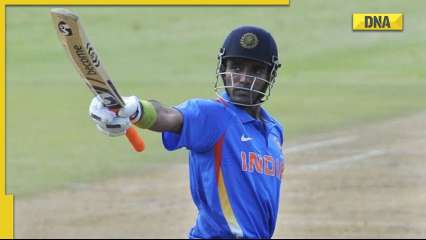 Former India fanatic Robin Uthappa announced on Wednesday that he will retire from cricket in all formats. The veteran took to Twitter announcing his decision to take time out for his illustrious career.

Uthappa won the T20 World Cup in 2007 with India. He was one of the players to ball-out against Pakistan in India’s first match at the inaugural T20 World Cup. Uthappa, a three-time IPL champion and former orange cap winner, made his international debut against England in 2006.

He took to Twitter to announce his decision to retire from all forms of cricket.

Uthappa shared two written notes, as well as his iconic image of celebrating by taking off his cap after the bowl-out against Pak, Uthappa writing: “It was my greatest honor to represent my country and my state, Karnataka. Things should come to an end.” come to an end, and with a grateful heart I have decided to retire from all forms of Indian cricket. Thank you all.”

It was my greatest honor to represent my country and my state, Karnataka. However, all good things come to an end and it is with a grateful heart that I have decided to retire from all forms of Indian cricket.

“It has been 20 years since I started playing cricket professionally, and it has been the greatest honor to represent my country and state, Karnataka – a wonderful journey of ups and downs; one that has been satisfying, rewarding and enjoyable and has grown as a person. However, all good things come to an end and with a grateful heart I have decided to retire from all forms of Indian cricket.Although I will be spending a lot of time with my young family, I am looking forward to a new phase of life,” he wrote in his suicide note.

He also thanked all the IPL teams he has played so far. He played for Chennai Super Kings in the Indian Premier League last season. He also appeared for Mumbai Indians, Royal Challengers Bangalore, Pune Warriors India, Rajasthan Royals and Kolkata Knight Riders in the 14 years of IPL.

ALSO READ  Fantasy Football: Five of the Best Matchups to Exploit in Week 3

In domestic cricket, he represented Karnataka, Saurashtra and Kerala respectively.