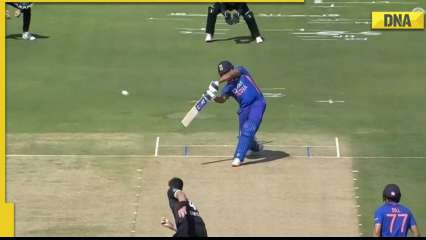 Rohit won the coin toss and decided to bat first in the series opener, explaining that the team wanted to make a habit of defending totals in preparation for the upcoming World Cup. The Indian squad enters the series on a high note, with a remarkable 3-0 whitewash of Sri Lanka.

Rohit Sharma gave India a blistering start with a knock of 34 runs in just 38 balls but failed to convert his score into a big knock. The Indian captain’s stroke included two maxima, breaking MS Dhoni’s long standing record. Rohit is now India’s leading six-getter in ODI cricket history, with a total of 125 sixes to his name.

Rohit and Dhoni are the only two Indians with more than 100 sixes in the 50-over format, with Yuvraj Singh a distant third in the list. His effort in the series opener was a testament to his prowess as a batsman and a reminder of the legacy he is creating in the world of cricket.

Most sixes in India’s ODI:

During his innings, Rohit Sharma surpassed former Australian wicketkeeper Adam Gilchrist’s ODI run total of 9619. He was eventually dismissed for 34 off 38 balls, having hit two sixes and four boundaries along the way.