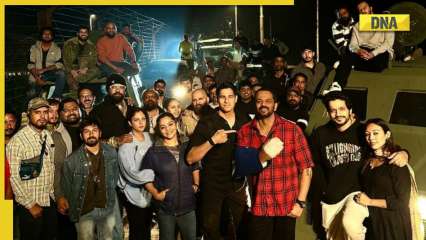 After being involved in an accident on the sets of the Indian Police, Rohit Shetty resumed shooting for his debut web series with a bandaged hand in Hyderabad. The filmmaker suffered an injury to his hand during shooting at Ramoji Film City on the outskirts of the city and was admitted to Kamineni Hospital where doctors performed minor surgery.

The director of Cirkus shared a health update with his fans and followers, sharing a photo with the entire crew on his Instagram and wrote: “Another car flipping over… but this time with stitches on 2 fingers… Nothing to worry about I’m totally fine…thank you so much for your love and concern. Shooting of Indian Police in front of Amazon Originals in Hyderabad @primevideoin #indianpoliceforce”.

Sidharth Malhotra, the lead man in the Indian Police Force, also shared a video with Rohit on his Instagram, calling him a ‘rock star’. Along with the clip, Sidharth wrote, “A true master leads by example. We all know @itsrohitshetty Sir’s love of action and his passion for the stunts he directs. Last night while performing a CAR STUNT action piece SELF, he met a unfortunate accident. After a sleepless night and minor surgery, he is back on set in less than 12 hours. Sir! you are an inspiration to all of us. Love n Respect,” added an emoji for the evil eye and bowing hands please.

In May last year, the Sheshaah actor suffered a minor injury while filming the web series in Goa. And in August, Shilpa Shetty also broke her leg while shooting for the same series. In addition to Sidharth and Shilpa, Vivek Oberoi will also be seen in the series that will be released this year.

With Indian Police Force, the filmmaker has expanded his police universe consisting of Singham aka Ajay Devgn, Simmba aka Ranveer Singh and Sooryavanshi aka Akshay Kumar to the digital world. And it will be interesting to see if those three appear on the OTT show as well.

READ | Ajay Devgn kicks off 2023 with Singham Again narration by Rohit Shetty, hopes this will be their ’11th blockbuster’

ALSO READ  SS Rajamouli Has A Fan Moment When He Meets His 'God' Steven Spielberg, Fans Call Them 'GOATs'