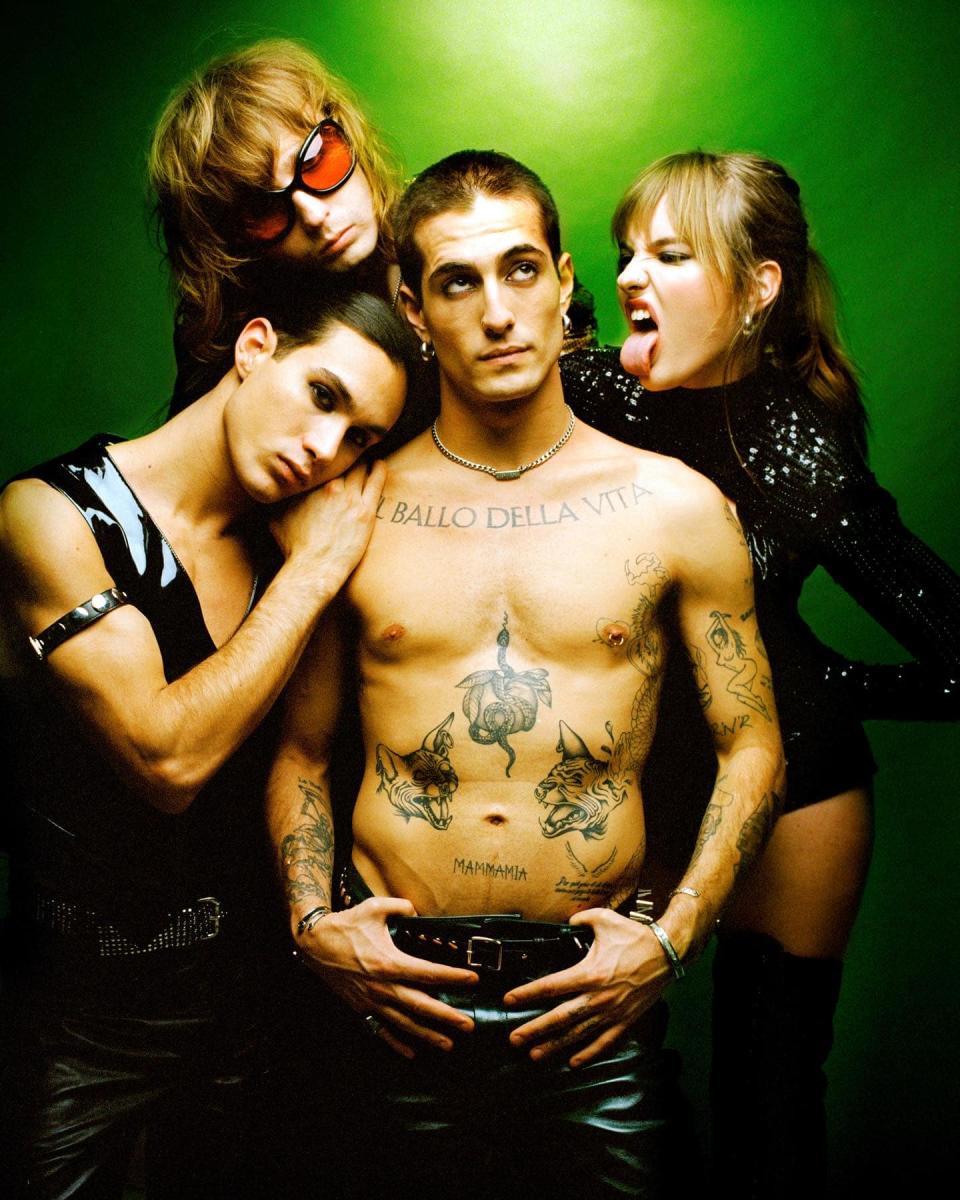 But that’s exactly what happened, against all odds.

After triumphing at Eurovision 2021 and having the second biggest TikTok song of the year with their raucous cover of the Four Seasons’ “Beggin'”, Måneskin have established themselves as one of the biggest emerging rock bands of the past decade. They toured with the Rolling Stones; recorded with Iggy Pop and Tom Morello; earned critical acclaim from the Red Hot Chili Peppers’ Flea (“She’s a rocker!” he said about Måneskin’s tough bass player, Victoria De Angelis) and Metallica; and performed at the MTV Video Music Awards and Saturday Night Live.

They are the hottest Eurovision group to break through in the US since ABBA winners in 1974, and as they prepare for the release of their highly anticipated third album, RUSH!, Måneskin just keeps winning. Charismatic frontman Damiano David tells Yahoo Entertainment that his ultimate goal is to win a Grammy, and that could very well happen at next month’s ceremony where they’ll be nominated for Best New Artist. If David has his way, Måneskin will be the first Italian act to win in a “Big Four” Grammy category since the first annual ceremony in 1959.

It could be argued that what actually helped Måneskin gain fame in America – where the Eurovision Song Contest, despite being one of the most watched broadcasts in the world with an average annual audience of 200 million, is not well known – is a controversial (and, frankly, totally rock ‘n’ roll) moment from the broadcast. The scandal, then David popped up to snort cocaine while sitting in the contestant’s lounge immediately went viral, before the Måneskin’s “Zitti E Buoni” was even announced as the winning song of 2021. By the time a victorious, shirtless, champagne-swilling David and his bandmates attended their post-ceremony press conference, they had no choice but to address the gossip.

David steadfastly denied the allegations, explaining that the shimmering mystery substance on the table in front of him were shards of a glass that Måneskin guitarist Thomas Raggi had broken. ‘I don’t do drugs, please guys. Do not say that. Really, don’t say that!” he urged the reporters present.

It was an awkward incident that could have derailed the careers of some young artists. But instead it got people talking about the group, and eventually it even inspired one of them RUSH!‘s punkiest songs, “Kool Kids.” Talking to Yahoo Entertainment about the snarky track, covering “all the cocaine and shit controversies”, David explains that he shouted “really, really bad words, like more than bad words you can’t say on television” because he thought Måneskin was about to hit rock bottom during the unveiling of the votes in the Eurovision Song Contest. So I ducked [forward]because I was hiding [from the camera].”

David then chuckles, “Yeah, so they thought that was me So truly a genius, because I think if you do, you are more than just a man – you are like a demigod! Like, I was powerful enough to take a line of coke on live television in front of 80 million people on the table, on the damn table, front row in the arena? … And then, with the perspective, it seemed like I had the most powerful nose [be able to] sniffing cocaine from 30 cm [away]? There’s a lot of drama. I wish I did. I just love it. Unfortunately I don’t do drugs.”

Davis later voluntarily took a “f***ing drug test,” which came back negative for cocaine (“It was ketamine,” De Angelis jokes to Yahoo), and cleared his name. But sometimes he wonders if he shouldn’t have tried so hard to disprove the wild rock and roll rumor. “I decided to do that [drug test] on my own, but I’m so sorry”, he laughs. “I wish the day after when I said, ‘No, it’s not true’… I’m sorry because I wanted people to think, ‘Maybe he’s so damn crazy that he did it!'”

But the anger in ‘Kool Kids’, which the group wrote ‘immediately after the Eurovision song contest’, doesn’t just stem from that specific incident. Sardonic lines like “Everyone knows rock ‘n’ roll is shit/But I don’t give a fuck about being a cool kid” and the rather to-the-point “Eat my shit” were inspired by the many detractors – unbelievably, even people who work for the band – who didn’t believe that Måneskin could succeed playing 70s/80s style glam rock.

“Before [winning Eurovision]we had a whole team telling us to do that [change our style]David reveals. “For example, they thought ‘Zitti E Buoni’ was a worthless song. They once said – and this is the most iconic thing that’s ever happened to us – ‘If you think “I Wanna Be Your Slave” is a hit, then you know nothing about music!” That last single, released two months before Måneskin winning the Eurovision Song Contest with “Zitti E Buoni”, eventually going platinum or multiplatinum in 11 countries and topping Billboard’s Hard Rock Songs chart in the United States; a duet remake with former Stooges frontman Iggy Pop, one of the band’s many idols turned admirers, was later released.

“We felt like we were invincible, but at the same time we were a bit pissed, because we won the Eurovision Song Contest, but our team told us that our music sucks,” recalled David. “We had this frustration, and so we sort of mixed these two feelings and made this song [“Kool Kids”]which is a huge middle finger to all the things that have been said to us.

David adds with a grin that after Måneskin won the Eurovision Song Contest, all kinds of former naysayers “tried to jump on the bandwagon, but we flicked them off. Immediately we shook the train and they fell off.” And of course Måneskin – David, De Angelis, Raggi and drummer Ethan Torchio – are now the coolest kids around.

Not everything about Måneskin’s newfound success was positive. On a track RUSH!“Mark Chapman,” a protest against the media’s glorification of “serial killers and psychopaths,” named after the man who killed John Lennon, was also inspired in part by David’s own recent experience with a stalker. “I had books sent to my house and strange things happened,” the singer reveals. “I had a wife who followed me and my girlfriend trying to keep track of everything we were doing and sending things to our house – and I don’t know how she found out where we lived. So it’s like you don’t feel safe. … I don’t even remember the book. I don’t even think I opened it.

But the four childhood friends, who have been banding together since 2016, have leaned on each other for support as their lives have changed dramatically, for better and for worse, during the hustle and bustle of the past two years. And they’re glad they stuck to their rock ‘n’ roll vision together. In fact, De Angelis believes that’s how successful they became because they “weren’t trying to fit in with the market or anything that wasn’t authentic to us.”

De Angelis says, “I think people can see and appreciate this in our music, and it’s maybe kind of sad these days that a lot of artists are forced to do something that isn’t who they really are because it’s not what’s trending. on the charts and stuff. So it feels pretty refreshing to see a young band come up and play something that’s not more modern right now – but it’s just something that they really like and resonate with.”

Watch Måneskin’s full, in-depth Yahoo Entertainment interview above, in which they discuss writing and singing in English versus Italian; more details on ‘Kool Kids’, ‘Mark Chapman’ and RUSH!; the stigma associated with competitions such as Eurovision and The X Factor; their special bond; and their other lofty but seemingly achievable career goals.