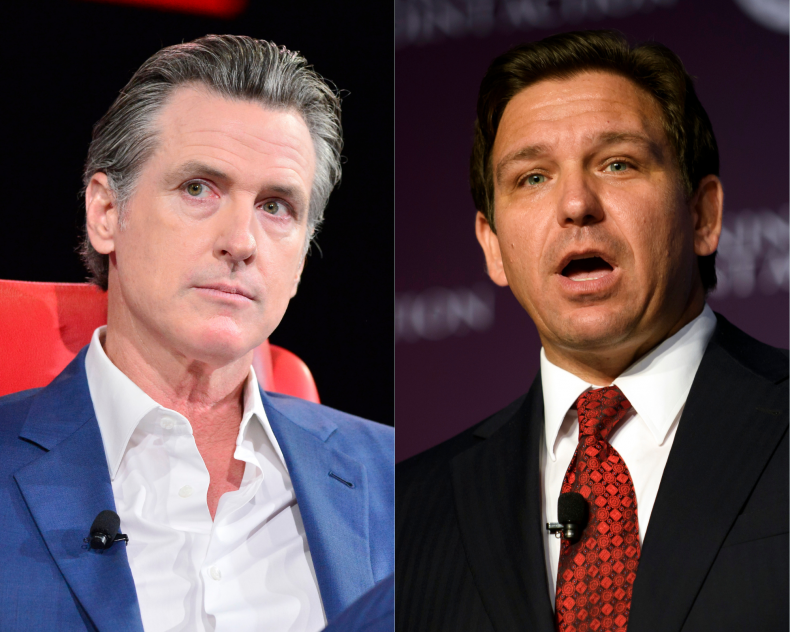 Florida Governor Ron DeSantis says he tried to help migrants by flying them to Martha’s Vineyard. But California Governor Gavin Newsom says DeSantis should be investigated for possible kidnapping and extortion charges.

The pair of politically opposed governors fired off their dueling a day after DeSantis’ office confirmed that Florida’s new “relocation” program had flown the migrants to the luxury vacation spot. DeSantis, a Republican, shrugging off critics who called the move cruel, said Florida was sending migrants to a self-proclaimed hospitable jurisdiction. But Newsom, a Democrat, reacted with horror and called on the Department of Justice (DOJ) to investigate.

Florida on Wednesday sent two planes carrying undocumented immigrants to Martha’s Vineyard, an island off the coast of Massachusetts that can only be reached by boat or plane. The move was strongly denounced by Massachusetts State Representative Dylan Fernandes, who called it “evil and inhumane,” and by the White House, who called it a “cruel political stunt.”

At a news conference Thursday, DeSantis criticized President Joe Biden for illegally allowing “millions upon millions of people” and illegal drugs, including fentanyl, into the US. DeSantis said he would help migrants reach so-called “sanctuary jurisdictions,” states and cities that restrict their cooperation with federal authorities to deport immigrants.

“If you have people who tend to think Florida is a good place, our message to them is: we are not a refuge and it is better to go to a sanctuary jurisdiction,” he said. “And yes, we are going to facilitate that transport for you to go to greener pastures.”

DeSantis’ relocation program follows Texas Governor Greg Abbott, who busses migrants to New York City and Washington, DC, in defiance of the Biden administration’s immigration policies and liberal jurisdictions that have taken a more lenient approach to immigrants. without papers.

The sudden arrival of two planes carrying undocumented immigrants to Martha’s Vineyard caused local officials and volunteers to rush to attend to their needs. Reports have emerged that some migrants did not know where they were and were told they would be taken where jobs and housing would be available.

“Like millions of Americans, I am shocked by the images of migrants being transported on buses and planes across the country to be used as political props,” Newsom wrote. “Clearly it is morally wrong to transport families, including children, across state lines under false pretenses, but it could also be illegal.”

Newsom wrote that several migrants taken to Martha’s Vineyard said a recruiter falsely told them they would be taken to Boston where they would get an accelerated work permit. If true, Newsom said it would be an attempt to “humiliate and dehumanize” the migrants on the basis of their national origin.

News week has reached out to DeSantis for comment.