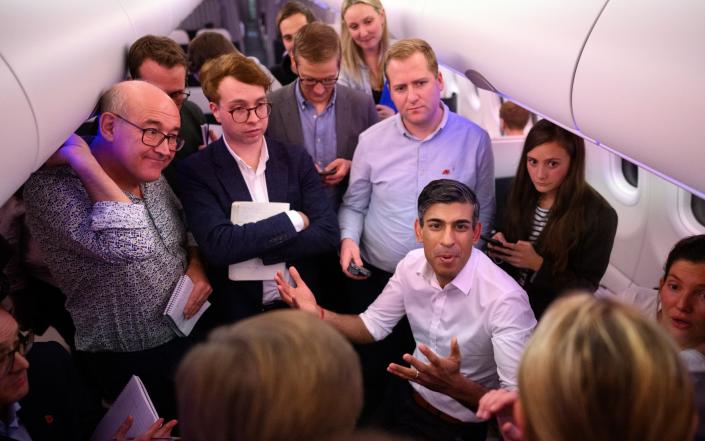 Rishi Sunak has labeled Russia a “rogue state” as he called out Vladimir Putin for failing to attend the G20 summit in Bali.

The prime minister said the Russian president’s no-show at Monday’s summit means he doesn’t even try to explain his actions, despite being “responsible for so much bloodshed in Ukraine”.

The summit marks the first time a British prime minister has met with Russian officials since the February invasion of Ukraine, which saw Kremlin foreign minister Sergei Lavrov replacing Putin.

Mr Sunak will use the summit’s first plenary session to confront Mr Lavrov with the “illegal” invasion of Russia, following the hardline of his predecessors Boris Johnson and Liz Truss.

The prime minister will also push for a five-point economic plan for the G20 – a meeting of the world’s largest economies – including reducing dependence on Russian oil and gas.

It will be Mr Sunak’s first meeting with Mr Biden, with Ukraine, free trade, energy security and the Northern Ireland Protocol, all subjects that could be discussed.

Writing for The Telegraph, Mr Sunak outlined his tough stance on the Kremlin that will be spotlighted at this week’s summit.

Mr Sunak wrote: “We will not let our economic future be held hostage to the actions of a rogue state – and neither will our allies.”

He also said of Putin: “Leaders take responsibility. They show up. Yet one seat remains vacant at the G20 summit in Indonesia this week.

“The man responsible for so much bloodshed in Ukraine and the economic struggles around the world will not be there to confront his colleagues. He won’t even try to explain his actions. Instead, he will stay home and the rest of us will get on with the task ahead.

“Last week we saw the Ukrainian flag hoisted over Kherson again, just weeks after Putin declared that the city would be part of Russia forever. It is a historic milestone in Ukraine’s struggle to take back what is theirs.

“They stand up for fundamental principles that matter to all of us – the principles of sovereignty and self-determination, which are the foundations of a stable international order.

“But we know that the Ukrainian people are still suffering terribly from the ongoing Russian bombardment and prolonged power cuts in freezing temperatures.

“That is why last Thursday, when I spoke to Volodymyr Zelensky, the Ukrainian president, I made it clear that Britain will never back down when it comes to supporting the Ukrainian people in the face of this brutality.”

There is little hope that a communiqué will be agreed with some firm language about the war in Ukraine, as every country has to agree to the text and Russia is present.

The summit will provide one of the first glimpses of Mr Sunak’s worldview as a leader, with the new prime minister’s views on many geopolitical issues that are little known.

Mr Sunak’s ministerial letter has been in the Treasury and on local government affairs in the past, and he did not become an MP until 2015.

The first point of the Prime Minister’s “Economic Action Plan” is “direct government support where it is most needed”, meaning a general principle to prioritize protecting the most vulnerable, both in the UK and abroad. .

The second is to “end the armament of food production and distribution” – specifically, restarting the agreement to source grain from Ukraine, which has broken down.

The third is to “strengthen our energy security and reduce Russia’s energy dependency,” a push that the UK has fueled throughout the year.

The other two are to “open up world trade” and “provide fair, reliable financing to help developing countries grow sustainably”.