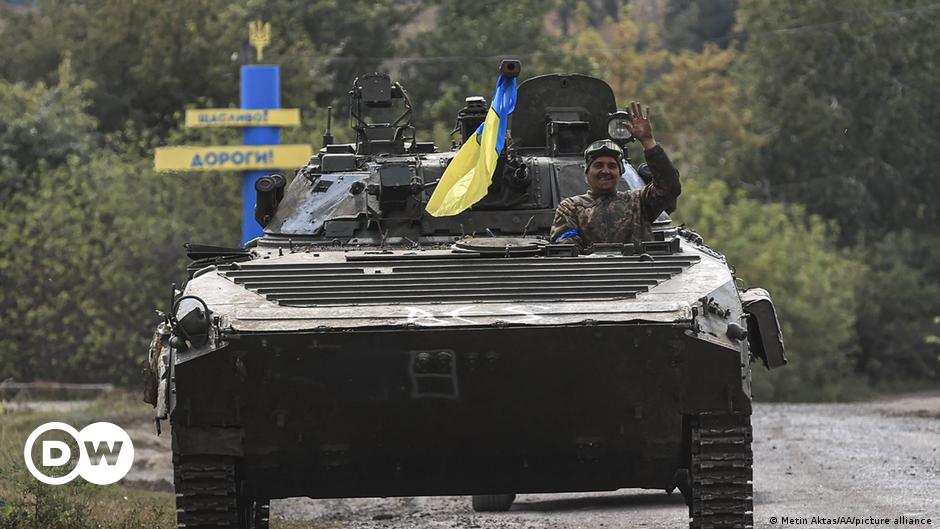 Amid reports that Ukrainian forces have succeeded in driving invading Russian forces from some parts of the country, calls have been made by leading German coalition politicians for Berlin to actively promote the counter-offensive with new weapons.

The head of the Foreign Affairs Committee, Michael Roth of Chancellor Olaf Scholz’s Social Democrats (SPD), said the West as a whole must do its best to help Ukraine achieve victory.

“In this new phase of the war, Ukraine needs weapons with which it can liberate and permanently keep under its control the territories occupied by Russia,” Roth told the Funke media group.

“The West, especially the US, Germany, France and Poland, must work closely together here quickly and adapt their deliveries to the new situation,” he said.

He said it seemed increasingly realistic “that Ukraine can win this war, as a free, democratic country while preserving its territorial integrity.”

The head of the defense committee, Marie-Agnes Strack-Zimmermann of the business-oriented Free Democrats (FDP), told the German news agency DPA that Germany had an obligation to help preserve democracy.

“Germany must immediately play its part in Ukraine’s successes and provide protected vehicles – the Marder infantry fighting vehicle and the Leopard 2 main battle tank,” she said on Sunday.

Germany was initially criticized for being slow in supplying weapons to Ukraine, but has since provided the country with a lot of equipment, including heavy weapons, in a major break with its previous policy of not supplying deadly weapons to conflict zones.

Here’s a look at some of the other key news stories about Russia’s September 11 war in Ukraine.

By phone, the two leaders reportedly expressed their willingness for an “unpoliticized interaction” on the matter with the participation of the International Atomic Energy Agency (IAEA).

Putin also told Macron that the EU should not hinder Russian food and fertilizer deliveries to Africa, the Middle East and Latin America, according to the statement published on the Kremlin’s website.

Thousands of people have entered Russia from Ukraine in the past day as Ukrainian forces claimed to have driven invading Moscow forces from parts of Kharkov’s northeastern region, a local Russian governor has said.

“Thousands of people have crossed the border in the past day. Most of them went to relatives in their own vehicles. Today 1,342 people are housed in 27 temporary shelters in the region,” said Vyacheslav Gladkov, the region’s governor. The Belgorod region, said in a video statement on social media.

Moscow announced on Saturday that it was withdrawing troops from strategic cities in the south of the Kharkov region, explaining the withdrawal, saying they would be sent to reinforce Russian forces in the Donetsk region, a key target of the Russian invasion.

However, many observers believe that a swift counter-offensive by Ukrainian forces in recent days has forced the Russian army to withdraw.

Ukrainian forces continue to advance in the northeastern region of Kharkov, up to 50 km from the border with Russia, Ukraine’s Supreme Commander General Valeriy Zaluzhnyi said on Sunday.

He said troops are also moving to the south and east of the region as they “continue to liberate Russian-occupied areas”.

ALSO READ  Portugal, Ukraine support US demand to include India and other countries as permanent members of UN Security Council

More than 3,000 square kilometers have been recaptured by his troops since early September, Ukraine’s Supreme Commander General Valeriy Zaluzhnyi said in a statement on the Telegram messaging app.

“Towards Kharkov we started advancing not only to the south and east, but also to the north. There are still 50 kilometers left before we reach the state border,” Zaluzhnyi wrote.

“I am proud and grateful for every Ukrainian soldier. It is an honor for me to fight side by side with you,” he added.

Russian forces have withdrawn from the region, with the Russian Defense Ministry saying on Saturday that the withdrawal from Izium and other areas in the Kharkiv region was intended to bolster Russian forces in the neighboring Donetsk region to the south.

The withdrawal seems likely to hinder Moscow’s plans to advance on Sloviansk and Kramatorsk, key to Russia’s plans to take the entire Donetsk region.

Recent claims by Russian President Vladimir Putin that the vast majority of grain exported from Ukraine under a UN-backed deal would go to EU countries are false, the UK Defense Ministry has said in an update to the intelligence agency said.

Putin claimed on Wednesday, without citing sources, that only 60,000 tons of grain had been exported to developing countries on just two of the 87 ships carrying the products.

The UK ministry quoted UN figures saying that in fact about 30% has been delivered to low- and middle-income countries in Africa, the Middle East and Asia.

“Russia is pursuing a deliberate misinformation strategy as it seeks to shift blame for food insecurity, discredit Ukraine and minimize opposition to its invasion,” the ministry said.

The update also reported that Ukrainian forces had recently recaptured a significant portion of territory in the Kharkiv region. It said several Russian units had “probably” withdrawn from the area, but fighting continued around Kupiansk and Izium.

Ukraine continues a counter-offensive in the east of the country to drive Russian troops out of the Kharkov region, the Ukrainian military has said in an update on the 200th day of the invasion of Moscow.

“Our troops have entered Kupiansk. The liberation of settlements in the Kupiansk and Izium districts of the Kharkiv region is underway,” the Ukrainian army said in a general battlefield update.

Ukraine has recaptured about 2,000 square kilometers from Moscow’s troops in recent days, the update said.

Russia first said it would send reinforcements to the Kharkov region. On Saturday, however, it announced it would transfer troops from there to the Donetsk region to aid in Moscow’s attempt to capture it in its entirety.

War has made wheat cultivation and export difficult for Ukrainian farmers. So they turn to oil-producing plants instead. The Ukrainian government plans to build an innovative pipeline to Poland to help them.

The Russian government has imposed severe penalties on those who publicly oppose the war. But there are those who are still willing to resist, as this article about a group of councilors in St. Petersburg shows.