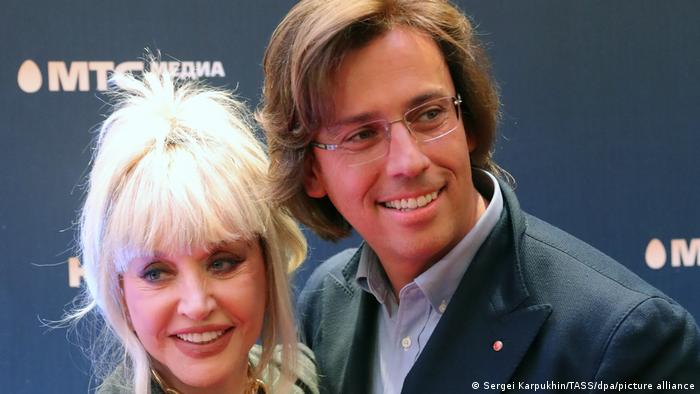 No, Alla Pugacheva has not used the word “war” in public – that is a criminal offense in Russia. She also did not explicitly mention Ukraine. But what Russia’s most beloved pop star of all time posted this weekend hit like a bomb. That’s because millions of Russians see it as a protest, albeit indirectly, against what the Kremlin calls its “special military operation.” And Pugacheva is by far the most prominent person who dared to express such feelings in public.

The post on Pugacheva’s Instagram account has a backstory. Last Friday, her husband, Maxim Galkin, a famous Russian comedian and until recently a TV star, was declared a so-called foreign agent by the Ministry of Justice. Galkin has been living abroad for several months and left Russia after resisting his criticism of the invasion of Ukraine, along with the rocket attacks on Ukrainian cities. Instead of touring Russia, he has since toured abroad and donated the proceeds of his performances to Ukraine.

Pugacheva’s post was in response to Galkin’s new “agent” status. In a caustic appeal, she asked the Ministry of Justice to also add her to the ranks of foreign agents: “For I stand in solidarity with my husband, an honest, decent and sincere person, a true and unsaleable patriot of Russia who wants his prosperity in the homeland, a peaceful life, freedom of speech and an end to our boys dying for illusory purposes that make our country a pariah and complicate the lives of our citizens.”

Alla Pugacheva and her husband, Maxim Galkin, together in 2021

From Kaliningrad to Vladivostok, 73-year-old Pugacheva enjoys widespread respect. For millions of fans, she has been a legend since the 1970s. And if there is such a thing as the soul of the people, Alla Borisovna Pugacheva, with her biggest hit, “A Million Red Roses”, would embody it. Pugacheva was also Russia’s best-known singer internationally for decades. More than 250 million records and CDs of her hits were sold. Many of her songs are still sung by young and old at Russian parties.

Pugacheva’s private life – in particular her marriage to Galkin, who is 27 years her junior – is also a constant topic of interest in the Russian media. Unlike Galkin, Pugacheva made no political statements after the invasion of Ukraine began on February 24. Many saw her silence as an eloquent subliminal protest from the Kremlin. But this weekend’s more overt protest was met with mixed reactions.

Some of her 3.5 million Instagram followers wrote: “Respect for Alla”, “Bravo, Alla Borisovna!” and “Alla Pugacheva’s best performance in many years.” However, others attacked the pop diva because she didn’t go far enough to criticize the war explicitly, but only wanted to protect her husband. Still others have called the singer a traitor to her homeland. Russian politicians, artists and other celebrities have all weighed in on Pugacheva’s words.

Political scientist Abbas Galyamov called Pugacheva’s post a “strong slap in the face” for the Kremlin on his Telegram channel. The mere fact of her politicization could make Russians feel that ‘enough is really enough’.

Pyotr Tolstoy, deputy chairman of the Russian State Duma, accused the singer of losing her mind: “I regret that Pugacheva, once the most popular singer in the country, has lost so much touch with reality and stands in solidarity with those who wish today the defeat of Russia.”

The Kremlin declined to comment on the matter. Spokesperson Dmitry Peskov said Pugacheva’s words are “not an issue related to the Kremlin”.