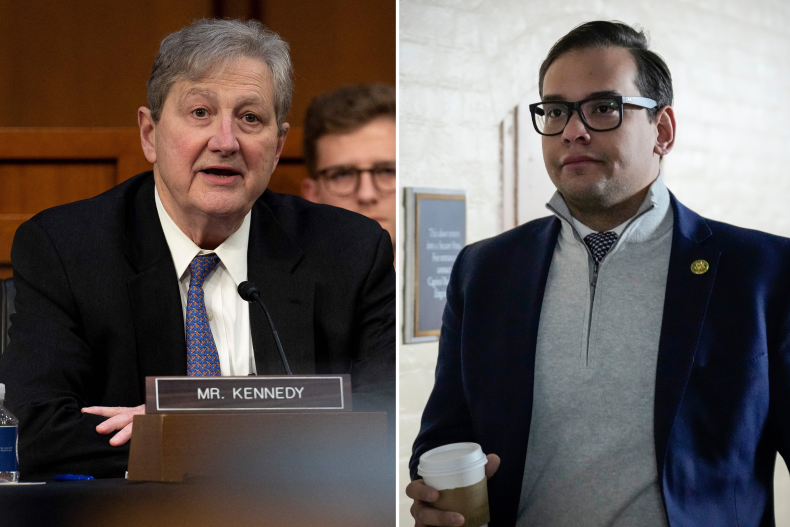 Kennedy, who represents Louisiana, told reporters Monday that Santos was “as nutty as a fruitcake,” according to a report by CNN congressional correspondent Manu Raju. An excerpt of Kennedy’s comments was also later posted by Now this on Twitter Tuesday evening.

“He, like every other American, has the right to a fair trial,” the senator said. “But if the allegations turn out to be true, I would arrest him.”

“I called him a rabbit boiler,” Kennedy added. “I don’t know if you’ve seen ‘Fatal Attraction,’ but there are people like that.”

The term “bunny boiler” is a reference to the 1987 film “Fatal Attraction”, in which Glenn Close’s deranged character boils a rabbit in revenge against her ex-lover and his family.

According to Dictionary.com, the slang term is often used to describe a person who is “considered emotionally unstable and likely dangerously vengeful.”

Santos responded to Kennedy’s remarks Tuesday afternoon, tweeting, “I am saddened that a senior GOP senator whom I have respected would use such derogatory language against me.”

“Such language is hurtful and divisive and has no place in Congress,” Santos wrote.

The newly elected New York legislator has faced repeated calls to resign from Congress after it was revealed that he had lied about large parts of his resume during the past election cycle.

The fabrications include information about his educational background, previous work history and Jewish origins.

Twitter users did not give up their criticism after Santos also berated Kennedy for his “hurtful” language. The Republican political action group the Lincoln project responded to Santos’ tweet on Tuesday with a photo of the legislator in the House, writing, “You know what also has no place in Congress?”

Eric Columbusformer special trial attorney in the House, wrote in response to Santos: “I am saddened that you lied about 9/11 causing your mother’s death, about being the grandson of Holocaust refugees, about attending college and a business school, and about a lot of your career.”

“Such lies are hurtful and divisive, and you should have no place in Congress,” Columbus added.

The account Republicans against Trumpism also reiterated the call for Santos to step down from his first term.

“Maybe I’m the only one, but I don’t think you’re the right person to complain about ‘abusive and divisive’ language,” the account tweeted, adding, “#ResignNowGeorge.”

Santos has repeatedly rejected calls to resign, but this month told conservative podcaster Steve Bannon he would step down if 142,000 people asked him to. As News week previously reported, more than 142,000 voters elected Santos in November.

Last week, several online petitions asking Santos to resign had received more than 142,000 signatures, and a Siena College poll released Monday found that about 49 percent of New York’s GOP voters believe he should step down.