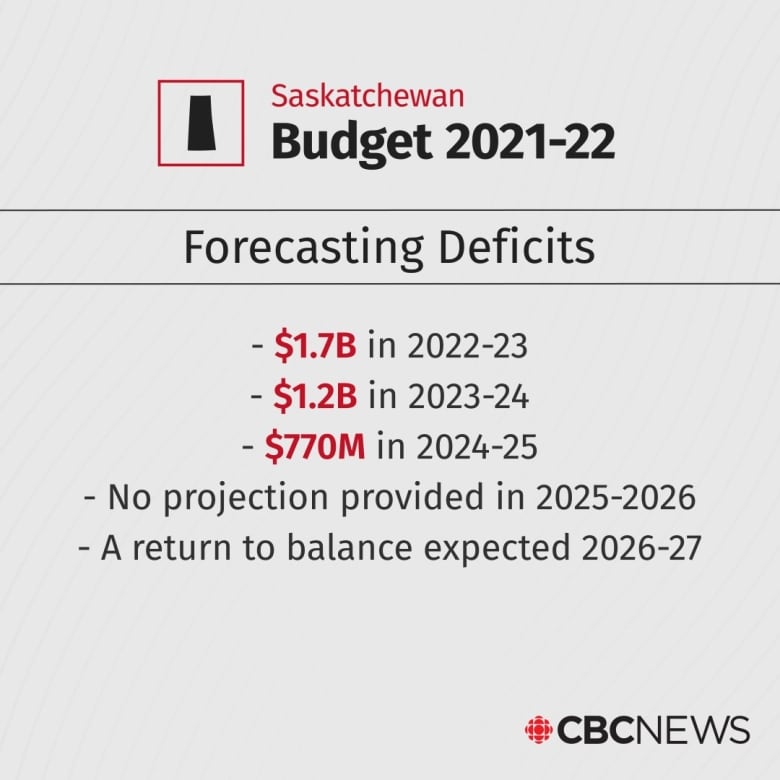 The Saskatchewan government’s 2021-2022 budget projects a record deficit of $ 2.6 billion and predicts the province will not see a balanced budget until 2026-2027.

Finance Minister Donna Harpauer called the fallout from COVID-19 “the biggest shock to the economies of Saskatchewan, Canada and the world since World War II.”

“As a result, this year’s deficit will be larger and the return to balance will take longer than expected. But we will make the investments necessary now to protect the people of Saskatchewan until the end of the pandemic and for economic recovery as we emerge. ”

Harpauer said the predictions and projections in the budget are based on the vaccine rollout “going as planned,” meaning a majority of residents get vaccinated by September or sooner.

Harpauer said the province was responding to the health and financial crisis by spending record amounts on health, education, social services and the protection of people and property.

During last fall’s provincial election campaign, the Saskatchewan Party pledged $ 849 million in spending, with an additional $ 7.5 billion slated for capital projects over the next two years. .

A host of previously announced platform pledges and projects are included in the 2021-2022 budget.

Harpauer said every election promise has been kept in the 2021-2022 budget, except for a promise to get back to balance by 2024.

The government said $ 90 million of the increase was for the COVID-19 response, including the rollout of mass vaccination, personal protective equipment, laboratory capacity and costs for doctors.

The Saskatchewan Health Authority’s budget will increase by $ 221 million, or six percent.

The province has also allocated $ 6 million to hire 100 orderlies to help residents of long-term care facilities.

A trio of elements of the electoral platform entered the health part of the budget:

The province is also spending $ 1.4 million on the STARS air ambulance to purchase a new helicopter.

The government will spend $ 3.75 billion on education, which includes pre-kindergarten to grade 12, post-secondary and skills training. This part of the budget has increased by $ 391 million, or 11.6%.

The province’s 27 Kindergarten to Grade 12 school divisions will receive $ 1.96 billion in funding next year, an increase of $ 19.2 million. This increase includes a 2% salary increase for teachers that was part of the recent collective agreement.

The overall increase in funding for post-secondary education is 4.4% over last year, or $ 28.4 million.

The government said it was providing “a significant multi-year investment to help increase the long-term financial sustainability of post-secondary institutions.”

This includes an additional $ 60 million over the next two fiscal years for “COVID-19 recovery” and other “shared priorities”.

This includes the $ 90 million intervention from the health sector, $ 20.7 million for Saskatchewan schools and $ 6.8 million for the isolation program in the North.

The opposition NDP has said the budget does not meet immediate education, child care and long-term care needs.

“There is no jobs plan in this budget,” said NDP finance critic Trent Wotherspoon.

NDP Leader Ryan Meili said the government’s fiscal plan includes “half measures” and does not do enough to support those affected by the pandemic.

Meili called it an “irrelevant budget”.

“What I’m frustrated, animated, really angry about is what’s going on in this province. Scott Moe let Saskatchewan down on COVID-19 and as a result damaged our economy and dragged people down. lose their lives. “

Meili said the NDP will have different “priorities” and spend the money the government chooses to spend in different areas.

The government is committed to spending $ 3.1 billion in capital spending, including:

The government is forecasting deficits for the next five budgets. Here is the breakdown:

Harpauer said the path to getting back to a balance does not need to include tax increases.

“We don’t plan for tax hikes in the future,” Harpauer said.

Asked about paying down the debt, Harapuer said “there will come a time when we can start working on the debt.”

She said the “debt of concern” was the operating debt of the province.

Harpauer said revenue from non-renewable resources was 9% of government revenue, more than half of what it was a decade ago.

The province based Tuesday’s budget figures on the following forecast:

There are two tax changes to note. From September 2021, the government is adding a Steam Product Tax (VPT) with a rate of 20% on the retail price of all liquids, products and steam appliances.

It will also add an annual tax of $ 150 for electric passenger vehicles. The government said the number of electric vehicles in the province was “relatively low” but said “they do not contribute to road maintenance through the provincial fuel tax.”

The electric vehicle tax will come into effect on October 1, 2021.