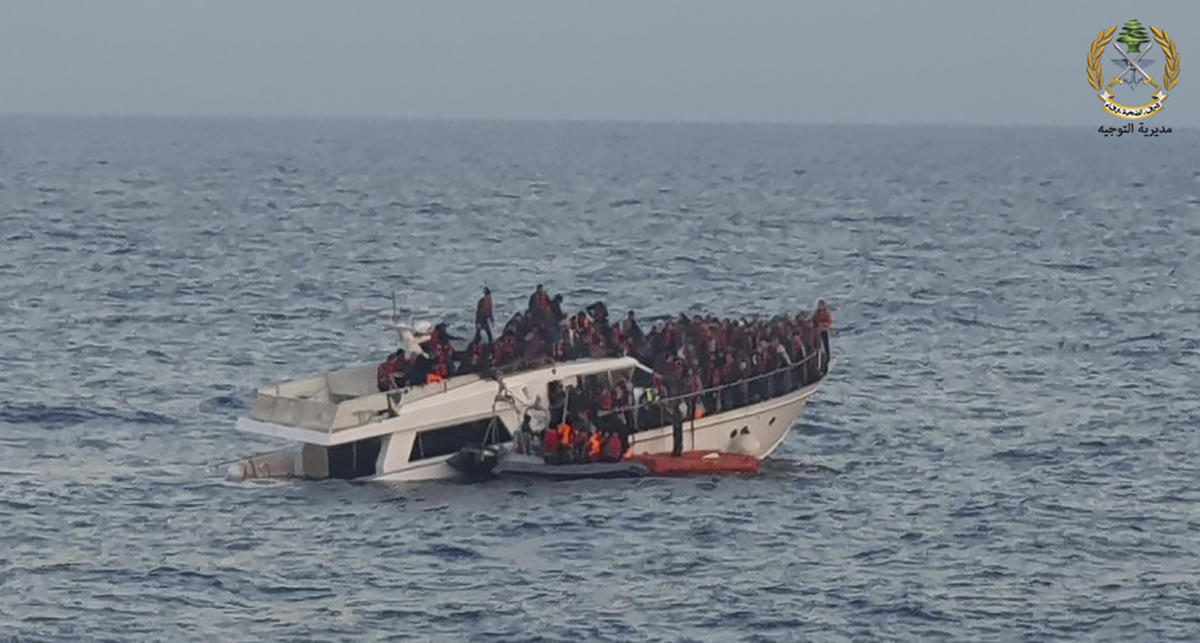 TRIPOLI, Lebanon (TBEN) — On New Year’s Eve, a small boat carrying more than 230 would-be migrants, most of them Syrians, collapsed and began to sink after departing from Lebanon’s northern coast.

Since the collapse of the Lebanese economy in 2019, more and more people – mainly Syrian and Palestinian refugees but also Lebanese citizens – have tried to leave the country and reach Europe by sea. The attempts often prove fatal.

This time, rescue teams from the Lebanese Navy and UN peacekeepers deployed along the border with Israel were able to rescue all but two passengers, a Syrian woman and a drowned child. For many of the survivors, however, the relief was fleeting.

After taking them back to the coast to the port of Tripoli, where they recuperated overnight, the Lebanese army loaded nearly 200 rescued Syrians into trucks and dropped them off on the Syrian side of an unofficial border crossing in Wadi Khaled, a remote area in northeastern Lebanon. said some survivors and human rights monitors.

It remained unclear who ordered the deportation, but the incident marked an apparent escalation in the Lebanese military’s deportations of Syrians at a time of heightened anti-refugee rhetoric in the small, crisis-plagued country. Officials from the military and General Security – the agency normally responsible for managing immigration issues – did not respond to repeated requests for comment.

Once on the other side of the border, the survivors of the boat were intercepted by men in Syrian army uniforms who herded them into large plastic greenhouses. They were held there until relatives paid to have them released and taken back to Lebanon by smugglers.

Al-Yassin said he paid $600 — to be split between the Syrian army and the smugglers — to have his brother brought back to Lebanon. Syrian officials have not responded to requests for comment on the allegations.

One of the boat’s survivors, Mahmoud al-Dyoub, a 43-year-old refugee from the Syrian area of ​​Homs, said he heard their captors negotiate the price of each detainee.

“I don’t know if it was the Syrian army or the smugglers,” says Dayoub, who has also been registered as a refugee in Lebanon since 2012.

“There were 30 people around us with guns and we didn’t know what was going on,” he said. “All I cared about was not being taken to Syria, because if I’m taken to Syria, I may not come back.”

Dayoub said he managed to sneak out and flee back across the border – his family never paid a ransom for him.

Human rights observers say the case of the boat survivors is a disturbing new twist in Lebanon’s ongoing push for Syrian refugees to go home.

Lebanon is home to about 815,000 registered Syrian refugees and possibly hundreds of thousands more who are unregistered, the highest refugee population per capita in the world. But since the country’s economic collapse erupted three years ago, Lebanese officials have increasingly called for a mass return of the Syrians.

The Lebanese General Security Service has tried to convince the refugees to go home voluntarily, resulting in anaemia. In some cases, the agency has sent people back to Syria, citing a 2019 regulation that allows unauthorized refugees who entered Lebanon after April of that year to be deported.

Reports by human rights organizations mention cases of forced detention and torture of returned refugees, which the Lebanese authorities deny. Until recently, deportations usually involved small numbers of people and were carried out according to formal procedures, giving the UN and human rights organizations the opportunity to intervene and, in some cases, stop them.

What happened to the boat survivors “is a violation of human rights and of Lebanese laws and international treaties,” said Mohammed Sablouh, a Lebanese human rights lawyer.

Lisa Abou Khaled, a spokesman for the UN refugee agency in Lebanon, said UNHCR is “following up with the relevant authorities” on the matter. “All persons rescued at sea who fear returning to their countries of origin should be given the opportunity to seek protection,” she said.

Jimmy Jabbour, a member of parliament representing the northern Akkar district, which includes Wadi Khaled, said when army patrols intercept would-be migrants who have entered Lebanon via smuggling routes, they are often rounded up and dumped in the no-man’s-land across the street. the border — instead of starting a formal deportation procedure.

After that, the deportees simply pay the smugglers to bring them back in, Jabbour said, adding that he had complained to the military about the practice.

Unlike the newly arrived migrants, the survivors of the New Year’s Eve boat included refugees who had lived in Lebanon for more than a decade and were registered with the United Nations.

One of them, a Syrian woman from Idlib who spoke on condition of anonymity for fear of retaliation, said she was detained at the border for two nights before her relatives paid $300 to let her return to Lebanon.

“I cannot return (to Syria). I would rather die and throw myself into the sea,” she said.

Jasmin Lilian Diab, director of the Institute for Migration Studies at Lebanese American University, said many refugees take to the sea to avoid deportation.

Diab said her institute found a spike in migrant boats leaving Lebanon in late 2022. Some told her team of investigators they left because of increasingly aggressive anti-refugee rhetoric. They feared “deportations would take place and they would be sent back to Syria,” Diab said.

“So they felt like this was their only chance to get out of here.”

The Bharat Express News writers Kareem Chehayeb and Bassem Mroue in Beirut contributed to this report.

Teen Sold on Facebook: I Was Raped by Putin’s Private Army and Tricked into an Abortion