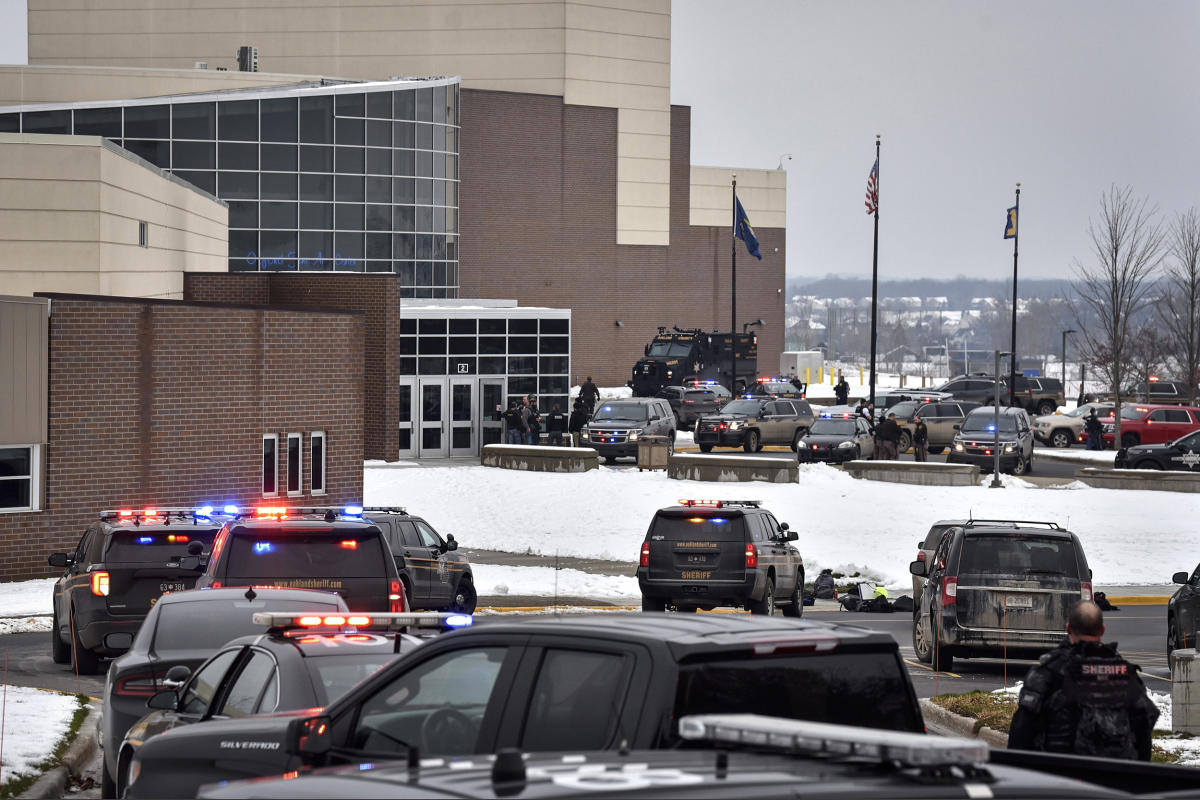 A high school counselor and dean unknowingly handed a suspect in the shooting a backpack containing the gun and magazines that officials say killed four people and injured seven others in Oxford, Michigan, last year, a lawyer said. the families of the victims Thursday.

The exchange took place in the hours before the shooting, at a meeting where the suspect, then 15, was summoned after a math teacher found a note on his desk bearing a gun, a bullet and several disturbing phrases, including “blood everywhere.” . and “the thoughts won’t stop,” attorney Ven Johnson told reporters.

The lawsuit, which seeks $100 million in damages, charged the district with gross negligence, arguing that the Nov. 30 shooting was “completely preventable.”

While meeting with counselor Shawn Hopkins and Dean Nicholas Ejak, the student became “really concerned” about missing chemistry class and asked for his homework and backpack, Johnson said.

Hopkins went to get the bag, Johnson said. According to Hopkins’ testimony, Johnson said, the counselor commented on the backpack’s weight after the teacher gave it to it.

After returning to the meeting, Hopkins gave the bag to Ejak, who passed it to the teenager.

“None of them, according to their testimony, even thought for a second to ask… ‘Hey dude, show us what’s in there,'” Johnson said. “‘We just want to make sure everything is cool.'”

Hopkins told the suspect’s parents who attended the meeting that if they did not seek help for their son within 48 hours, he would report them to the local child protection agency.

The student returned to class around 11 a.m. and is accused of opening fire just before 1 p.m., Johnson said.

Johnson said some school officials missed other red flags, including an incident on Nov. 29 when the suspect’s teacher saw him looking at images of bullets on his phone.

After the teacher began reviewing his classwork and noticed that his interests “tended towards the violent side,” Johnson said, she shared what she found with other school officials, including Hopkins. Johnson said neither officials appeared to have investigated the matter.

In another incident earlier in the year, Johnson said, the suspect’s Spanish teacher asked Hopkins to speak to her student over an autobiographical poem that says he was “feeling terrible and his family is a mistake.”

Hopkins contacted the teacher, who said she was no longer concerned because she thought the student was talking about homework, not his life, Johnson said.

A lawyer for Hopkins and Ejak did not respond to a request for comment on Thursday. In one lawsuit, lawyers for the school denied allegations in the families’ lawsuit, describing some of them as inaccurate.