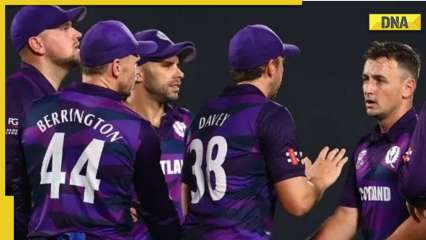 Scotland Cricket announced a roster of 15 players for this year’s ICC T20 World Cup in Australia on Thursday. Pacers Josh Davey and Brad Wheal impressed during various phases of last year’s edition of the tournament in the UAE and have been selected in a strong squad that will be led by veteran batter Richard Berrington.

READ: Fans want Sachin Tendulkar as ‘backup opener’ for T20I CWC as he scores 40 in 20 deliveries against England Legends

Richie Berrington will lead the squad, which includes Chris Greaves, who made his ICC T20 World Cup debut last year by scoring a match-winning 45 against Bangladesh. Matt Cross keeps wicket and replaces Berrington.

The improving team from Scotland will rely heavily on Berrington to deliver the majority of their runs, while veteran duo Henry Munsey and Calum MacLeod are also able to score well. Berrington’s experience will be valuable in Scotland’s top ranking, with the 35-year-old hitting two half-centuries and contributing a team-best 177 runs at last year’s event.

The right-hander will need to be at his best again this year if Scotland is to progress to the Super 12 stage, with Berrington’s team in Group B of the first round alongside Ireland, Zimbabwe and the West Indies.

Speaking about the roster, head coach Shane Burger said in an official statement issued by Scotland Cricket: “We are very pleased and delighted to announce our 15 players for the T20 World Cup. We have selected 15 who we believe will have the desired impact. For those players not going to the World Cup, we look forward to seeing them challenge for international honors in the coming years

READ: ‘The king is back’, netizens react as Babar Azam’s century propels Pakistan to 10-wicket win against England

The Bharat Express News - October 1, 2022 0
Liz Truss has just been confirmed as Britain's new Prime Minister, succeeding Boris Johnson as leader during what appears to be one of the...