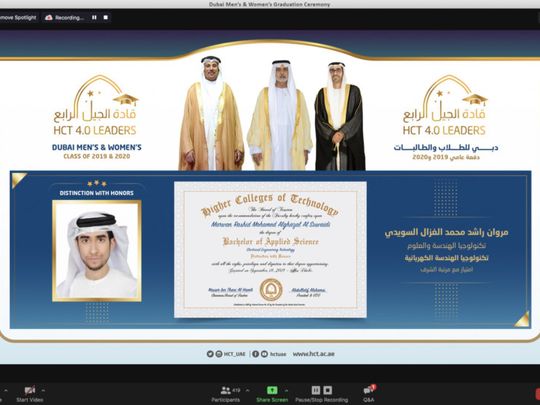 Dubai: The Higher Colleges of Technology (HCT) held a remote graduation ceremony via video conference to celebrate the graduation of 1,098 students from its Dubai branches.

The ceremony titled “ HCT 4.0 Leaders of Class 2019 and 2020 ” began with a speech by Sheikh Nahyan bin Mubarak Al Nahyan, Minister of Tolerance and Coexistence, in the presence of Nasser bin Thani Al Hamli, Minister of Human Resources and from Emiratization and Chancellor of HCT, Dr Abdullatif Al Shamsi, Director of HCT, members of the teaching and administrative staff of HCT, as well as graduates and their family members.

In his speech, Sheikh Nahyan stressed that the leaders of the UAE support education and always believe that the future of the country is linked to the capacities of its citizens and that education is the key to a bright future and to the achievement of the country’s aspirations and ambitions.

Sheikh Nahyan then thanked the President His Highness Sheikh Khalifa bin Zayed Al Nahyan, and His Highness Sheikh Mohammed bin Rashid Al Maktoum, Vice President and Prime Minister of the United Arab Emirates and Ruler of Dubai, and His Highness Sheikh Mohamed bin Zayed Al Nahyan , Crown Prince of Abu Dhabi and Deputy Supreme Commander of the Armed Forces of the United Arab Emirates, as well as Their Highnesses the members of the Supreme Council and the leaders of the Emirates, for their support of the HCT and their concern to ensure the quality and Excellency.

Al Hamli congratulated the graduates and said on behalf of the HCT Board of Directors that 1098 students from the 2019 and 2020 lots in Dubai graduated.

Dr Abdullatif Al Shamsi, President and CEO of HCT, congratulated the 2019 and 2020 cohorts and said that the ‘HCT 4.0 generation’ will be able to successfully meet future challenges and create their own opportunities. employment, according to their skills and competences. “Today’s HCT graduates are equipped with future skills that enable them to face changes in the labor market with agility and efficiency, which has made them the number one choice in the labor market,” he said. -he declares.

Canada-U.S. Student in Dubai gives face masks to UAE workers that will help them stay cool