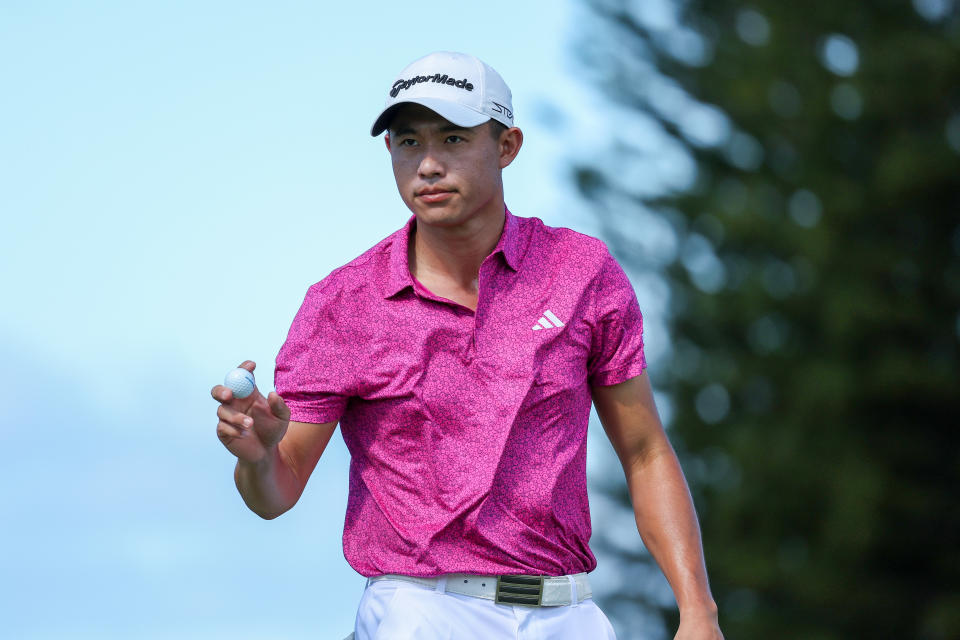 Morikawa flew ahead and took an early two-stroke lead halfway through the Sentry Tournament of Champions on Friday. After a 9-under 64 to open the first PGA Tour event of the year on Thursday, Morikawa posted a bogey-free 66 at Hawaii’s Plantation Course on Friday to reach 16-under on the week, two shots ahead of Scottie Scheffler and JJ Spaun.

He is the only man in the field to get through 36 holes without a bogey.

“Just like yesterday, [it was] pretty solid, made some good putts,” Morikawa said. just have to play shots and hit them more or less to good spots and luckily today we were able to take advantage of enough holes to keep those birdies more or less going.

Morikawa got off to a hot start on Thursday. After making only a few birdies on his front nine, Morikawa opened the back with a career-best six birdies to get ahead of the rest of the field. A big part of that was his short game, something Morikawa is finally comfortable with after a rough patch.

“I just have answers,” Morikawa said Thursday. “Before, when I was writing, it was like it was guesswork. I might have written well today and then thought I was doing something, but in reality it was something else.”

Morikawa held on Friday, opening with four birdies in his first five holes on his way to his bogey-free 7-under. He nearly equaled the Tour’s scoring record with 36 holes, but his birdie on the par-5 18th was just wide of the target line.

Morikawa is looking for his sixth career win on the Tour, and his first since the 2021 British Open. He took a pair of second places on the Tour last season and eight top-10 finishes, but Morikawa failed to to win a trophy. He came in at number 11 this week in the Official World Golf Rankings. Morikawa is 1-2 while leading after 36 career holes.

Scheffler, who finished his day with four birdies in a row, is second at 14-under after his second round of 66. He can reclaim the world No. 1 ranking with a solo third-place finish or better this week. Spaun is tied with him at 14-under, and Jordan Spieth sits alone in fourth at 13-under for the week. Spieth also had two eagles on Friday, including one that was almost an albatross on the par-5 fifth.

ALSO READ  Q&A: Morgan Pressel talks about her star-studded charity event, what intrigues her about the 2023 LPGA season, her choice of Pebble Beach and the best swing on tour

While there is plenty of golf to play and many great golfers right behind him, Morikawa looks extremely comfortable midway through the first elevated event of the season.

“[Morikawa] played well, just very solid’, Spaun said of his playing partner. “I don’t think he made a bogey. He is clearly a ball striker. With windy conditions and pins where you need to be very precise with your distance control and trajectory, it’s tailor-made for him.”

Xander Schauffele WD’s with back injury

Xander Schauffele pulled out of the event midway through his second round on Friday due to a back injury.

Schauffele said he had some back problems earlier in the week and it had become too much to continue after reaching the ninth hole on Friday.

It’s unclear what specifically is going on with Schauffele’s back, but he is expected to get an MRI next week. He suffered back pain during the Hero World Challenge in the Bahamas last month and also had to withdraw from the pro-am on Wednesday.

Schauffele is currently number 6 in the world. The 29-year-old made only one appearance for Kapalua this season. Last season he had three Tour victories, including back-to-back wins at the Travelers Championship and the Genesis Scottish Open, and seven top-20 finishes.

Schauffele is next on The American Express in California in two weeks.

“I was all set with my routine again,” he said of his actions on Friday after the Hero World Challenge, where he first suffered from his injury. “So that was probably a bit immature on my part, to be completely honest. I am 29, I need to maintain my health. I feel like I’ve done really well so far and the fact that I can’t really pinpoint what it is is a little frustrating.