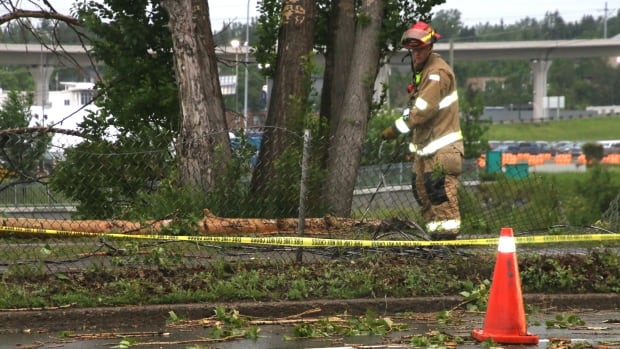 Thunderstorm and tornado warnings are in effect for parts of west-central Alberta as severe weather moves east across the province.

Environment Canada posted a tornado warning for Clearwater County near Rocky Mountain House and Crimson Lake, as well as near Nordegg and Big Horn Reserve around 2:25 p.m.

The alarm warns people in or near the area to be wary and take necessary precautions. Doppler radar indicated a possible tornado near Saunders, according to the post.

POSSIBLE TORNADO, 2:17 PM: A spinning severe thunderstorm currently west of Saunders may trigger a tornado. If you are in the area, immediately seek shelter indoors. If you’re on the highway, hide in a ditch or ravine. follow @AB_EmergAlert for updates. #AbStorm https://t.co/YeV714Vlv5

The weather service is also monitoring multiple severe thunderstorms that can cause very strong wind gusts, hail the size of nickel to ping pong balls and heavy rain.

Severe Thunderstorm Warnings were in effect as of 2:15 PM for: